Eytan Shander: 'If we are having this conversation in the first place, Wentz has already lost' 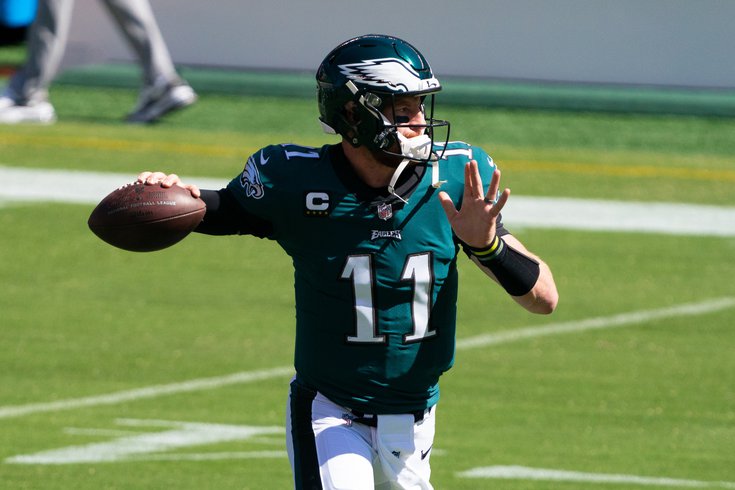 It’s a little crazy (maybe more than a little) that after four years of solid to great QB play, we find ourselves here. Right here. The moment that makes the most sense from the point of view of the person who is at the epicenter of all of this mess, Carson Wentz.

What in the world could he possibly do to reclaim this team or city for that matter? Win two Super Bowls? Probably three at this point. The ridiculous shadow that hangs over his head every day with Nick Foles and the 2017 team is enhanced to new levels with Jalen Hurts taking over the leadership role.

Wentz put in four solid years as the Philadelphia Eagles starting quarterback and it only took one huge step back for some people to erase the past. People on radio to Twitter are suggesting Carson was never really that good in the first place. In addition, conflicting reports swirled on Sunday regarding whether Wentz truly wants out of the city.

The fanbase is split, once again, between starter and backup. But this time it’s even worse for Wentz because we don’t even know what role Hurts really plays on this team.

Any NFL team that needs to improve their QB play would be thrilled with Hurts after 2.5 weeks. There would be zero discussion about his “role” and instead how fast a team can build around him.

Any NFL team that saw their starting QB play at an MVP level in Year 2 and helped lead a bunch of misfits to the postseason another year, would be insistent that it’s just a bump in the road. They would go out of their way to continue to put the right pieces from line to skill players around their franchise quarterback.

We don’t have that in Philadelphia. The game is rigged against Wentz, but as we already know, that doesn’t mean the other piece (Foles to Hurts) doesn’t matter. It’s quite the opposite.

Even if Wentz didn’t lose you as a fan as he has not lost me, you can’t help to notice two huge factors in why it’s in his best interest to leave. He isn’t a vocal or public magnet for drama, it appears to follow him.

The first key piece of evidence is history repeating itself. Wentz lost a lot of people during the first wave of “Foles vs. Wentz” then again in Year 2. Even last year – again with things that happen outside of his control – he was unable to “finish” the season after being knocked out of the Seattle game.

Wentz simply kept losing people because the other guy won a Super Bowl, then “cleaned up Wentz’ mess” the next season, only to be shipped off the following year. Even last year is forgotten in both the Foles and Hurts conversations, as people have conveniently removed his leading a poor skill set of players around him to the postseason from their memory.

Now it’s happening all over again. This time there isn’t any tangible discussion about how bad a guy has played elsewhere or if you can count on a guy in his late 20’s. This is a young and fresh kid who can throw the ball and run. There are quite a large amount of people – including right in the front office – who don’t even know if this kid is better or worse than Wentz.

Again, if we are having this conversation in the first place, Wentz has already lost.

It’s not changing, not leading a team to ten wins, not losing in the NFC Championship, not even winning a Super Bowl. Even then for Wentz it will be looked at as simply tying Foles. It’s enough to drive you crazy, but this is only the first real reason why Wentz needs to bail.

The second important piece of criteria was amplified this past Sunday with the conflicting reports on Wentz and his future. I spoke with one of the people reporting and provided the interview below.

Before we hit that, understand if you take Wentz at face value, that he did not demand to be traded if not named the starter, this still continues a damaging pattern. For another year in a row, we have someone inside the building – part of the Eagles organization – who has a problem with Wentz. The issue being so large, they choose to go public with it, instead of keeping it in-house. At least three straight years.

I’ll leave you with my own advice before turning it over to a man who knows the Eagles and Wentz better than most in this city.

You don’t come back from multiple quarterbacks successfully taking over your job, and you don’t get over damaging reports coming from inside the building each year. You won’t win back countless fans who decided to listen to ignorance and move on from your multiple accomplishments. Please, for your own sake, truly push this team to find a great fit for a fresh start. You deserve it.

I spoke with Rob Maaddi from the Associated Press about his reporting, refuting what ESPN said regarding Wentz wanting out from Philadelphia. You can listen to the interview – heard on iHeart Radio’s Fox Sports Radio The Gambler:

If you listen through the interview, it’s the ending that truly jumps out to me. It’s the biggest vocal supporter of Wentz – especially off the field – suggesting that the QB himself would be better off in another city.

Eagles bet of the week

In this case I think the best value might be found in how much risk you want to take. Instead of mining some in-game play, or looking at a sneaky player prop, why not make it as simple as possible?

The play here would be bumping this line up and getting ahead of the impact of Hurts. If we are to believe this energy on the Eagles will remain, and the team will continue to look revived, then they have a great chance to beat up on Dallas.

The Cowboys just make mistakes at the worst times, despite getting significantly better on defense. Look for the Eagles to push this game up towards 10 points. Bet up the Eagles to -8.5.

This week we highlight Jalen Hurts. We highlight something that’s completely different with the offense led by Hurts than with Carson Wentz.

Catch Props & Locks on FOX29 Thursdays at 7 p.m. with myself, Scott Grayson, and the always entertaining Sean Bell! We will be loaded with props for the Eagles game and break down other big value matchups.