“Come on guys, let’s be the team that supports each other.” 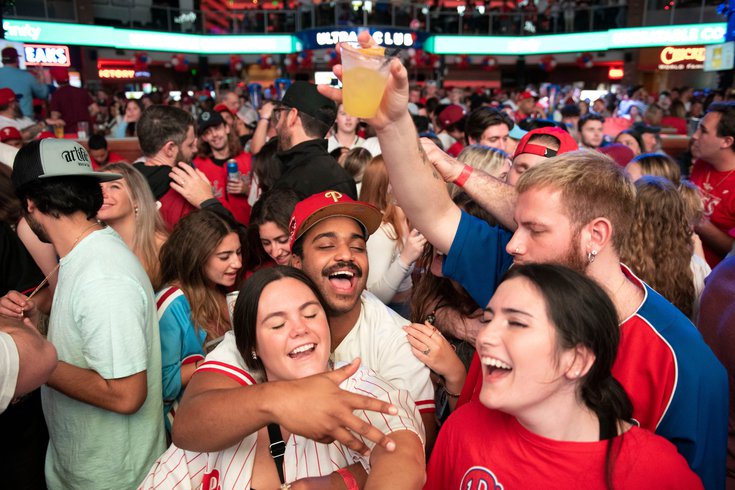 Truer words were never spoken by Homer Simpson: "Come on guys, let’s be the team that supports each other.”

Homer said that as he convinced his bowling team to support fellow member Otto in his quest for a strike. That same wisdom has already been applied to this magical run in Philadelphia sports – headlined by the Phillies in the World Series.

While some teams like the Eagles don’t need any nudging in the support department – at least when it comes to people paying attention – other teams like the Union and Flyers, not so much.

Don’t worry. This isn’t 1000 words chastising you for not watching a soccer team in the MLS Championship game or a hockey team that looks night and day better than last year. You have a life, you have dependents – from kids to that friend who can’t get it together. We get it.

The other part of it, and what this is truly about, is that the positivity is already spreading. Outside of the calls to fire Doc Rivers, there really isn’t anything major right now going on in any negative light in this city – at least from a sports standpoint – and people are taking notice.

The Phillies earned this level of trust that was consistently bestowed upon fans, far from TV stations working hours in the field to track down the one fan who still had hope following Game 4. People all over the country believe – still believe – that the Phillies are a team of destiny.

I believe they will still think that even if this thing goes to Houston. Something changed in this city in 2017 when the Eagles won the Super Bowl, but it was so much more a sense of relief than anything else. Sure, we all celebrated, it was a magical thing to walk Spring Garden following the win, then broadcast live during the parade. But that was about lifting the burden of loss off our collective shoulders, finally knowing what the other side of fandom feels like in the NFL.

Sure, there are similarities between the two runs, underdogs and improbable wins to start, but from our standpoint – it’s much different. Maybe it’s just hard to continue to get upset over sports with so much else going on, or maybe people just change and younger fans don’t want to surround themselves with negativity. All are possible, both together and individually, but something is different in Philadelphia with the Phillies run.

That’s it. That’s the big reveal. It’s been force-fed to us because we haven’t known that word nor it’s definition for a long time, if ever. It’s hard when the radio begs for interaction in four-hour intervals, reducing a 162-game season to a 16-game approach like the Eagles. It makes sense, the Eagles rate so treat everything like the Eagles.

Social media is great for this too. Microwaved reactions that come out as soon as the game ends, if not sooner depending on the results. Columns like mine still bring up the negatives like Rivers unable to guide the Sixers, despite the Eagles being undefeated and the Phillies on the cusp of another World Series victory. Just because I moved from one medium to two others doesn’t mean I’m innocent.

I also know what works.

My inclination is that will slowly die, as we’ve already seen people want change. Again, maybe it’s the city’s issues, or the country, or simple your own life that’s just gotten to be too chaotic, but I’m not sure people have the time nor want to be yelled at over and over again about their teams. Regardless of that “yell” being over the airwaves or in print.

So, I am here to start the process, my own process, and credit the Phillies' ninth inning in St. Louis as ground zero for this change. Once we saw them go through that, we should believe in anything. They certainly did.

I’ve been critical of two coaches more so than anyone else and felt the need to address that with the above in the backdrop. This was never about me pushing you to be more positive, or patient, or anything else. It was the harsh realization for some, the welcomed change for others, that it’s too late.

So much of that "Negadelphia" crap is looking – straining – for the negative. Something I have been guilty of with Johnathan Gannon. Something that subtly stopped but deserves attention. I was wrong and believe that he is far more deserving of credit that was given by me.

The other one is a little more complicated and speaks to the true grey area of changing into a more patient group of human beings – at least when it comes to firing, trading, or yelling about our teams. We are human beings. We get upset when things don’t go our way. That’s fine. Nothing should ever be wrong with that with sports. We get a little more upset than people in Nashville or Boise or Los Angeles, that’s never going to change either. It’s the extreme and the focus on the extreme that is dying.

Asking the Sixers to remove Doc Rivers from his coaching duties – even suggesting he remain in more of a front office position – is not extreme Negadelphia behavior. This is within the realm or parameters of rational discussion. You may disagree with it, but this is certainly worthy of a discussion and not being written because I need to bump up my clicks.

I don’t have any rules for fans. I’m not sitting next to you at any stadium event – nor is anyone telling you how to act from some media tower. You will do what you want because you don’t want to be told otherwise, that’s why you’re on Twitter for validation 😊, but it’s awesome to see you – the fan and consumer of content – shift how you act. That way isn’t AW SHUCKS either, you will get upset, I expect and encourage it.

Consider this an acknowledgement and continued plea for you – the overwhelming majority of fans in our great city – to continue to push for patience. Please, continue to act this way with our teams, no matter if the Union win or lose to LA, if the Phillies never get another hit in this series, or if the Eagles don’t make it back to Glendale.

I promise you one thing, the focus of how content is created and executed in this city across all mediums will drastically change – for the better – if you, the consumer, lead the charge.