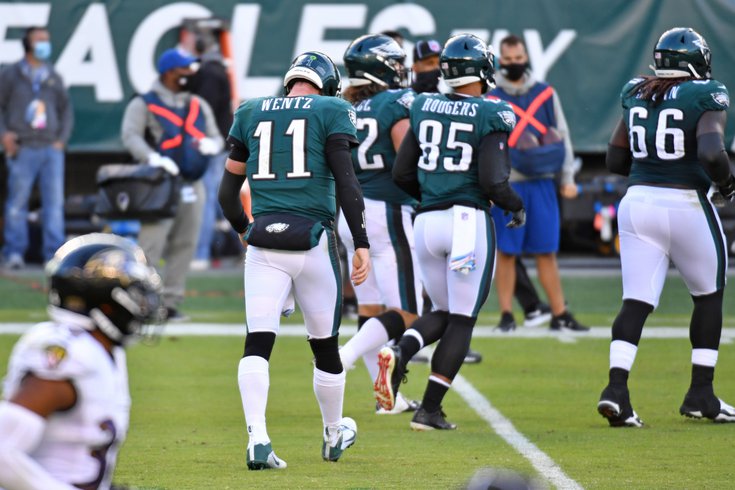 The Eagles have not exactly been a smart bet this season.

Week 11 in the NFL has six teams on byes, making this statistically the most difficult week in fantasy football to make the best decisions. Add to that 10 weeks of collective injuries leading up to this weekend and the fact that in most leagues there are only three or four regular season games left to make a playoff push during, and this is the pressure cooker moment fantasy football enthusiasts live for.

And so, picking your line up has never been more important. As always, we're here to help. We've singled out a player at each position we recommend starting as well as sitting this week. We are not including no-brainers (yes, start Travis Kelce this week, duh), but instead focusing on players who are often times touch-and-go and borderline starters.

With Drew Brees out for at least two or three weeks, Winston has a juicy matchup against the Falcons, a team that has allowed the most points to opposing fantasy quarterbacks this season. Winston will, likely, turn it over a bit, because that's kind of his thing — but he also has enough weaponry around him to sling the ball and to post a decent number. Winston is a no brainer start in Week 11.

Chances are, a great many leagues saw Wentz dropped at least once by owners frustrated with his turning the ball over 16 times while throwing just 12 touchdown passes in nine games. If you are able to keep him on the shelf, you should, as the Browns are a solid defense and Wentz has been very volatile and unpredictable this season. Don't drop him, however, as the Eagles face the Seahawks putrid pass defense next week.

The Texans have been abysmal against the run and Harris has shown he is the Patriots running back workhorse. He's carried the ball at least 10 times in each of the last four games, running it 22 times for 121 yards last week. This is about as favorable a matchup as you will get this season with any Patriots RB, and Harris is the least touchdown-dependent option.

The Bucs have been lights out against the ground game, allowing 3.01 yards per carry, the best in the NFL by a wide margin. Add to that the fact that the Rams have slowly been divvying up their carries and running back snaps incredibly equally among their three top options, and you get slim pickins' as far as reliable fantasy options go. Avoid these three if you can. And if you can't, roll with Brown who is their goal-line back and the most likely to find the end zone.

Brown is Baltimore's WR1 and has been targeted like it this season. But, for whatever reason, the opportunity has not met production. Last week, for example, he had seven targets but just two catches for 14 yards. According to FantasyPros.com, the Titans secondary has allowed a preposterous 70% completion percentage on passes to opposing wide receivers. If Lamar Jackson can find some rhythm, Brown could have a big game this week.

Is Green washed? In the shadow of rookie stud Tee Higgins, it's easy to forget about Green, who was a dominant force in Cincinnati for years. This year, though, he's been almost invisible. He has had a few good games but is yet to eclipse 100 yards this season, and combined for two catches on 10 targets over his last two games. We aren't saying you should drop him, but don't start him unless you are desperate — until he shows he deserves your trust.

If you missed our deep dive into the barren wasteland that are NFL fantasy tight ends this season, we recommend you give it a look, as the crop of options beyond Travis Kelce has been absolutely terrible. With not much to go on for streaming options, we'll look again at the Falcons terrible defense, which allows 5.6 more fantasy points per game on average than the league average. Which means Cook may find an opening to post a decent number.

Tonyan was a fantasy beast when DeVante Adams was injured, but since his return, the Packers undrafted free agent tight end has been inconsequential. He has not scored a touchdown since he scored three in Week 4, and his fantasy stats for the year are completely one-sided. It may be time to bail.