Fantasy football Week 11 waivers: Pounce on D'Onta Foreman while you can, Robbie Anderson too 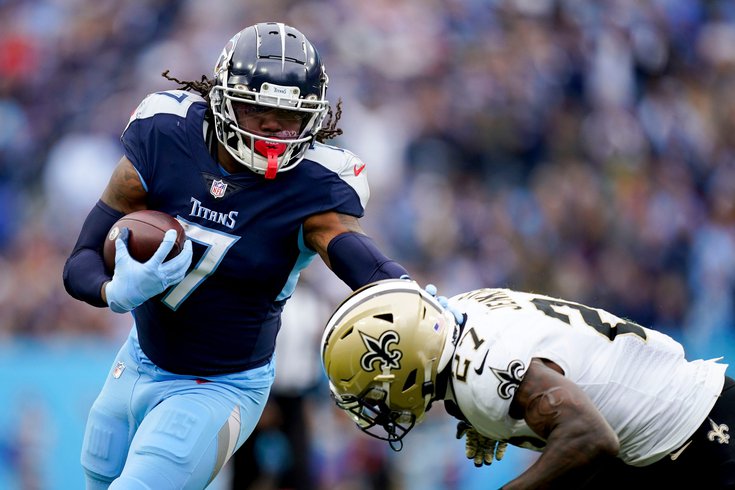 D'Onta Foreman could wind up being a RB1 very soon. Get him now.

There is finally a bit of a reprieve in fantasy football this week, as the NFL — for whatever reason — decided to have just two teams, the Rams and Broncos, on byes this week.

Which means it is probably less likely that you'll need emergency reinforcements from the waiver wire. There also have not only been a lack of big injuries in recent weeks, but several big name players seem like they'll probably be making a return to the field in Week 11.

Even still, there are a handful gems to be found in free agency that could swing your matchup this weekend. Here's a look at a player we like at each position who is also likely available in most leagues.

Jimmy G has actually been pretty good over the last three weeks and the Niners are surely riding high following their upset win over the Rams on Monday night. He's thrown for two touchdowns in each of his last two games and ran for a pair the week before that. With the Jaguars next on the ledger, chances are Garoppolo's success should not be hindered as he continues to build a special rapport with Deebo Samuel.

With a couple weeks now in the books since the injury to Derrick Henry, we have much more of a sense of how the Titans will utilize their running backs. And with Foreman available in 95% of Yahoo! Leagues, he's a potential impact and start-able player as the season continues. Foreman went from 21% of snaps at RB two weeks ago to 35% this week, outpacing Adrian Peterson. He also out-touched AP 13-to-9 in Week 10, as well as Jeremy McNichols, who had just seven touches. Foreman is trending to be the more featured back and should be targeted on waivers.

Amongst some pretty bad options, Anderson may be the best of the available bunch, boasting the most targets of anyone on the waiver wire by far with 59 in 10 games. He's coming off a contest that saw him score a touchdown, and with Cam Newton poised to take over under center there could be a more solidified presence throwing the ball in Carolina. The Panthers have a favorable matchup in Week 11 against Washington.

He is a little touchdown dependent but he does get a very consistent volume. Conklin has received 19 targets over the last three games and has 49 over the whole season. He has been a part of the Minnesota offense in every game this season and peaked last week with two touchdowns. He may not post double-digit points, but he also will probably not post a zero against the Packers this weekend.

Miami really showed something last week when they shocked the Ravens (and posted four sacks, an INT, a fumble recovery and a defensive TD) while allowing just 10 points. This comes one week after they had five sacks, three picks and a fumble recovery against Houston. They may not replicate their dynamic defensive performance completely for a third straight week, but against a pretty bad Jets offense, they're a prime target off waivers this week.