Fresh and local are the appeal 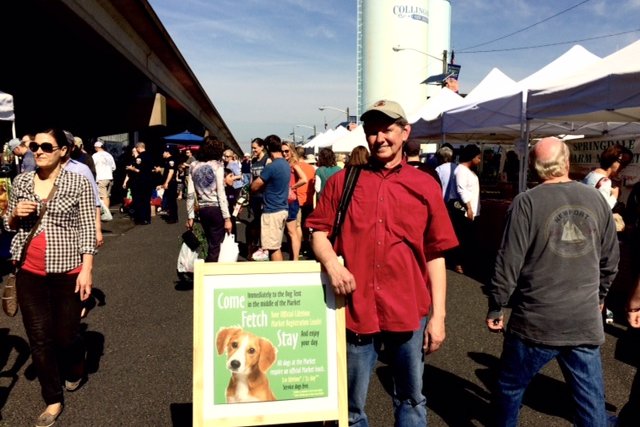 David Hodges manages one of the largest farmers' markets in the region for Collingswood. Thousands come on a good day.

Kali Duggins checks off most of the boxes when it comes to what is appealing about shopping a downtown farmers’ market.

They are walker-friendly, local, fresh, sociable, encourage nearby businesses, often have a social consciousness vibe -- and they make for a good outing.

And farmers’ markets are gearing up for the season throughout the Philadelphia region.

It’s the sort of shopping Duggins would rather do on a Saturday morning than trekking to the countryside to an actual farm stand or fighting for space in a suburban grocery store’s parking lot.

In Collingswood, one of the largest and oldest farmers' markets in the Philadelphia area, thousands of customers share Duggin’s love of seasonal provisions without travel hassles.

Duggin, 32, can easily walk to the market in her pedestrian-friendly town.

Market manager David Hodges said walkability is the key to the success of a farmers' market. Collingwood’s market is held on Saturday mornings in parking lots lining the PATCO rail line.

Walking to the market gives Duggins the opportunity to spend time with her Nova Scotia Duck Tolling Retriever, a rare breed of dog.

“She likes coming to see all the dogs and to get her kid fix,” she said of Molly, which her husband, a deployed U.S. Army member, uses for duck hunting.

Duggins generally hits up a vendor for a chilled coffee and then it is on to another stall for something to eat, with food and drink coming from local companies that have brick-and-mortar stores in the borough’s nearby downtown.

She takes a seat, listens to local musicians, enjoys the buzz of friends and neighbors, and does a once-around tour to see what’s in season, then buys a few groceries.

“I spend around 90 minutes. It’s more sociable than strategic,” she said. “You can strike up a conversation with anyone.”

For serious shoppers, she counsels coming early because some vendors sell out.

Also, the market becomes very crowded in its last hours, with thousands coming on a good sun-filled day.

Hodges said the market began in 2000 with about a dozen farmers.

Now there are more than 100 stalls and 24 farmers – growing everything from alpacas to zucchinis. Some, like organic berry farmers, are just involved for six weeks, but most farms remain involved for the season, which stretches from spring to November.

One new feature this year is an expanded online presence, including bloggers such as Denine Gorniak, who write mostly about food and cooking.

Leslie Viereck, who sells produce from his brothers’ farm in South Jersey’s Woolwich Township in Collingswood and also on Wednesday evenings at the smaller market in neighboring Westmont, said each market has a different vibe.

Because Westmont is in the evening, it is more about food trucks and feeding families out for the evening, than Collingswood.

“They have different levels of energy,” said Viereck, pausing to shake hands with a customer.

Part of the appeal of farmers’ markets is their localness.

In Philadelphia, the is the decade-old Head House Market, with some of the same vendors as in Collingswood on Sundays and the Rittenhouse Square Farmer’s Market on Saturdays.

In Delaware County, Lansdowne’s market begins May 28 and runs every Saturday through the end of October.

The Ambler Farmers Market is a go-to spot in Montgomery County Saturdays into the end of October.

In Bucks County, there's the Doylestown Farmer's Market on Saturdays through mid-November.

The Burlington County Agricultural Center holds a farm market in Moorestown is open Saturdays through the end of October.

Tell PhillyVoice your favorite farmer's market in the comments section -- and why!