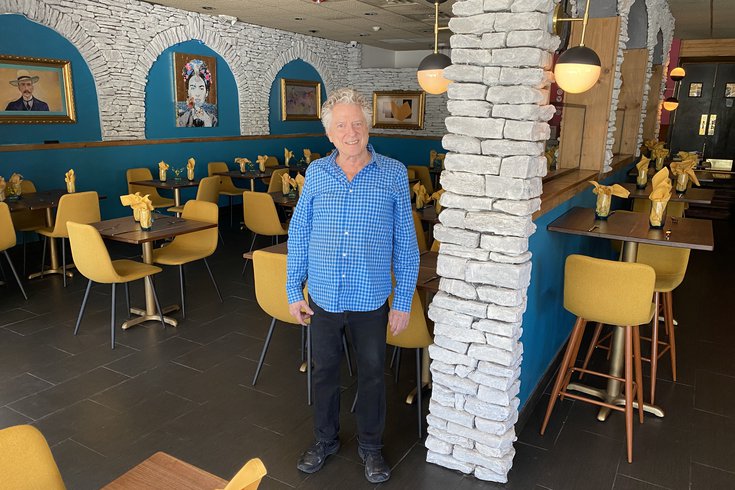 Restauranteur Peter Dissin in his new eatery the Fayette Street Oyster House & Grill in Conshohocken, which opens on Wednesday night. He used to own Pinefish in Center City.

Dissin previously owned Pinefish, a seafood restaurant in Washington Square West that recently closed after operating for six years. His new restaurant at 128 Fayette St. will initially only be open for dinner Wednesday through Sunday, but he plans to expand into brunch and lunch service this fall.

The drink menu features eight rotating local craft beers, a selection of red and white wines and a cocktail list curated by Lê from Hop Sing Laundromat in Chinatown.

A happy hour from 4-6 p.m. with "buck a shuck" oysters and drink specials is also slated to begin soon.

"It's been quite a ride operating Pinefish for the past six years in Philadelphia, and now I'm ready to bring a larger offshoot to the suburbs," Dissin said. "I have a lot of experience with restaurants in Conshohocken, and I think this is a concept that the area has been greatly missing."

Dissin's father operated 52 restaurants across the country over the course of his nearly 50-year career, with several located in the Philly region. He first learned about the industry at his sister and brother-in-law's restaurant Harvey's, which was located on Broad Street a few blocks south of City Hall.

Some of the restaurants he opened include Henry's at the Garden State Park Racetrack in Cherry Hill and the Calico Kitchen in Pennsauken and Plymouth Meeting. He also opened a restaurant called Henry's Son in the former Penn Center Inn in Center City.

Fayette is taking over the space formerly occupied by Tierra Caliente, a Tex-Mex restaurant which closed amid the COVID-19 pandemic in 2020.

Before opening Pinefish, Dissin served as a consultant for Isabella, a now-closed tapas restaurant on Elm Street. He also worked on 500 degrees, a burger joint in Center City which closed in 2015.

"After a really tough two years as a restaurant owner, I have very high hopes and excitement for what’s to come," Dissin said.