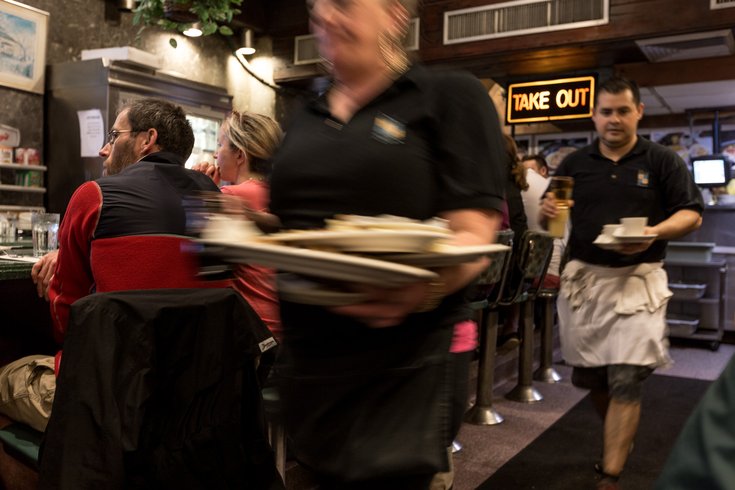 Regulars and first-time customers alike fill the dining area for their last meal at Little Pete's.

Margie Storm was just 17 when she went to work at Little Pete’s, the iconic 43-seat diner wedged in the corner at 17th and Chancellor, in the heart of Center City.

“It was for beer and hang out money!” said Storm.

The space, where mornings began with fresh coffee and late-night hangovers got nursed, will be demolished along with the rest of the block to make way for a hotel.

Progress — of a sort.

It’s easy to see how the joint got its name upon meeting diminutive Pete Koutroubas, who co-owns Little Pete’s with his brother, John Koutroubas. 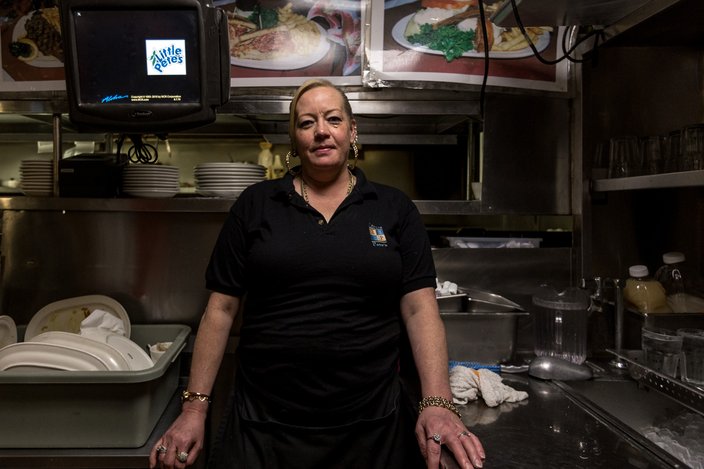 Margie Storm has served in the dining room at Little Pete's for 30 years, raising a family from her earnings.

John, who manages the Chancellor location, was too busy busing tables and seating customers to stand still for an interview Monday, though he adroitly pointed out regulars as he zipped by journalists.But Pete, who is most often at their other location, made a fine spokesperson for both brothers. After all, foodservice is Pete Koutroubas’ life.

A dishwasher, turned busboy, turned manager who also learned to cook and tend bar by doing, he opened Little Pete’s at the age of 20.

Which helps explain why it has not been easy finding reasonable replacement space in pricey Center City. He’s still hoping to find a new space in Center City for $12,000 to $15,000 a month, and not having any luck. 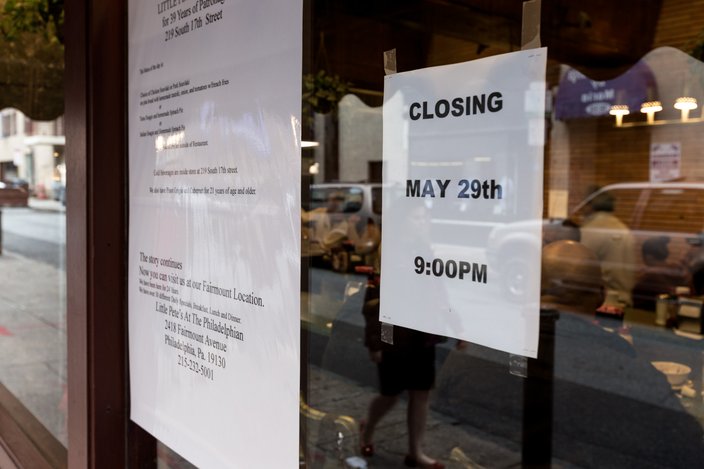 The Center City location of Little Pete's Restaurant will be permanently closing its doors after 39 years of business.

Sure, there’s still the larger Little Pete’s at 2418 Fairmount Ave., where much of the staff will migrate.

That location, which Pete manages, lacks the throwback noir atmosphere of Edward Hopper's “Nighthawks,” which is a large part of the charm of the Chancellor Street location.

“This is like I’m losing my baby,” explained Pete, who met his wife at the restaurant 33 years ago.

The 39-year-old location had lots of continuity and ritual built up over the years.

James Graham Jr., better known as “the umbrella man” because that’s what he sells on the nearby street corner, started nearly every morning since it opened with a bowl of oatmeal and lots of butter.

“Quite naturally, I’ll miss it,” he said from his corner seat just across Chancellor. 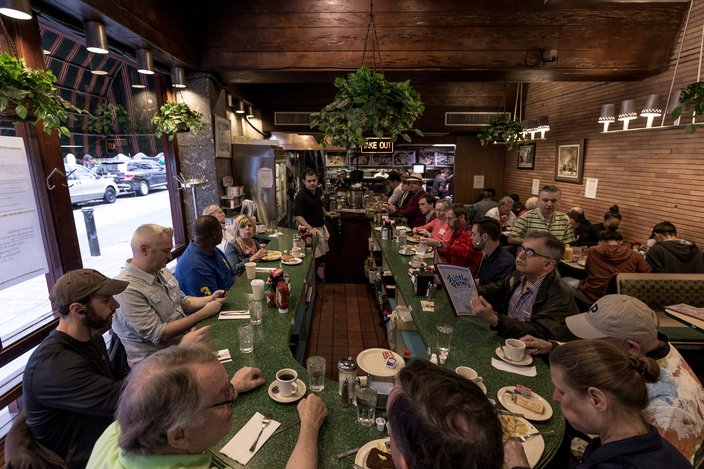 Regulars and first-time customers alike fill the dining area for their last meal at Little Pete's.

There’s the tuned-in staff, who knew to bring Barbara Davidson water without ice — without her asking.

And they put in for an order of "basted eggs" just as she liked them.

“And the best home-fries," she said. "What are we going to do without the home fries?”

Her companion, Allan Moser, recalled getting a Pete's hamburger — to go — for the illustrator Maurice Sendak.

“It’s gonna be… I’ll really miss it,” said Moser, who has been a regular since meeting Davidson more than 11 years ago.

“I’m stressing over it,” added Davidson, a veteran of more than two decades. She’s not sure she’s up for the street party on Chancellor from 11 a.m. to 3 p.m. on Tuesday, a final farewell and thanks to loyal customers. 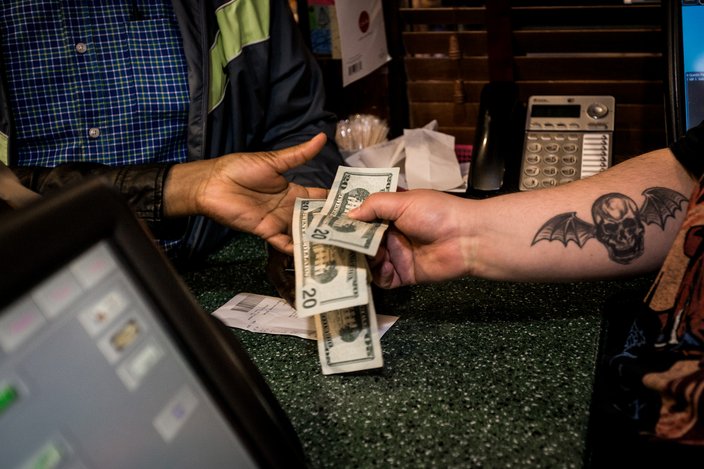 Sam Pryzbylski works the counter during the last service of Little Pete's.

Ron Douglas and Taylor Giorno have spent many dates over the past seven years eating “breakfast, lunch and dinner.”

Like many a regular, Douglas discovered Pete’s as “a place to sober up.”

He’s still an all-day breakfast sort of customer, even though the last six years have not required any alcohol antidote meals late at night.

They both like that the counter is a melting pot, with folks from all walks of life swapping stories and sharing condiments.

And at the intersection of their lives, there’s Little Pete’s.

“We ate here every weekend for years. The memories are bittersweet,” she explained. 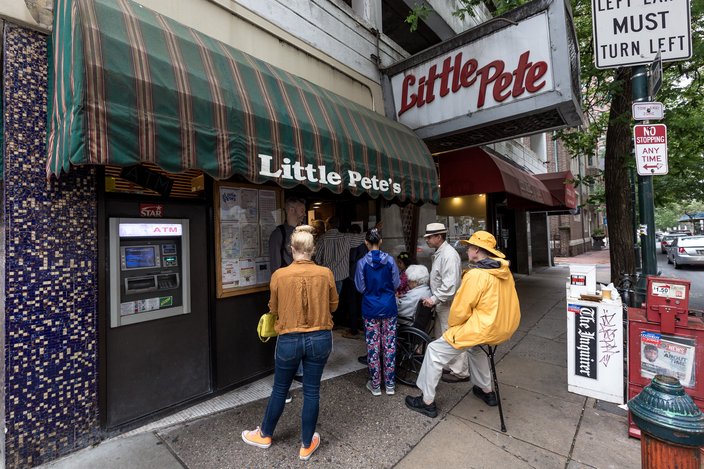 Patrons line up outside for one last meal at Little Pete's. The Center City staple will conduct its last service through Memorial Day and say goodbye tomorrow with a scheduled block party.

Storm, the veteran waitress, is taking time off for at least a few weeks. She thinks she’ll migrate to Fairmount – eventually.

She has a good handle on what made Little Pete’s beloved to its legion of fans. Of course, there was the good food. But the most important quality grew from the diversity of the customers. And the respect paid them by the staff.

Everyone who came in to Little Pete’s was treated the same, the guy who owned a hotel and the guy who shines shoes, she explained. Another waitress came around the counter to bid a final farewell to two now-grown customers who started coming as children.

“It was a pleasure watching you grow up,” she told the young men with a bear bug, their father looking on from a seat at the counter.