Five matchups to watch Saturday between the Eagles and Redskins 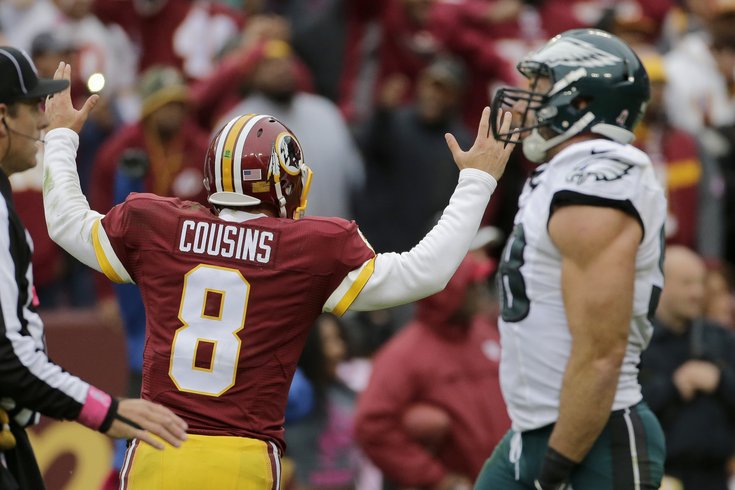 The Eagles did not get enough pressure on Kirk Cousins during their first matchup with the Redskins.

This is it. Do or die. Win or go home. If the Eagles can't take care of business at home this Saturday, their season will be over, and their exit will be well deserved. Here are five matchups to watch this Saturday between the Eagles and Redskins.

The Eagles will very likely be without Byron Maxwell, who has yet to practice this week. While Maxwell has been disappointing this season, the Eagles are unquestionably better with him than without him. Maxwell's likely absence will have a trickle-down effect on the rest of the secondary. It will require the Eagles to have extra defensive backs on the field against the Redskins' "11 personnel" (3 WRs, 1 TE), which means significant minutes for some combination of the following guys -- EJ Biggers, Jaylen Watkins, Chris Maragos, and Ed Reynolds.

"I think you could concentrate more on Garcon in our first matchup, but now you can't just concentrate on Garcon, you have to also concentrate on DeSean, and actually Jordan Reed who is playing really, really well right now too," said Chip Kelly. "They have three formidable guys there. When they get into 11 personnel and put Crowder on the field, then you have four guys you really have to worry about. It spreads you out a little bit in terms of who has to get your attention. But all of those guys need your attention."

Last season, Jackson helped end the Eagles' season when he feasted on Bradley "Under the Rainbow" Fletcher.

2) The Eagles' receivers' vs the Redskins' makeshift secondary

Entering the season, the Redskins' corners were DeAngelo Hall and Chris Culliver. Hall is now a backup safety, and Culliver is on IR. In the first matchup against the Redskins, Sam Bradford went 15 of 28 for 270 yards, 3 TD, and 0 INT, largely because he was able to hook up with Riley Cooper and (cough) Miles Austin for long TD connections. The Eagles were effective hitting deep shots because Culliver couldn't run, and shouldn't have been on the field.

In 2014, that number fell off some, as they managed 63 pass plays of 20+ yards, which was still very good, but nowhere near the output they had the previous season. Jeremy Maclin had 21 of those.

In 2015, with just two games to go, they have 47, which is in the bottom half of the NFL. Jordan Matthews leads the team with 11. Here's a snapshot of the Eagles big plays in the passing game over the last three years.

This Redskins secondary can be beaten. Can somebody make a play?

3) The Eagles' run defense vs Alfred Morris and Matt Jones

Alfred Morris and Matt Jones, the Redskins' two top backs, aren't world-beaters by any stretch, but they are both physical runners who can run through tackles. A week ago, the Eagles could not tackle Cardinals RB David Johnson:

The first time the Eagles faced the Redskins, their run defense was playing outstanding football. Now? Not so much.

The Eagles will likely be without NT Bennie Logan this week, which will hurt their run defense. But really, the Eagles' awfulness against the run of late has been a team effort. Obviously, the Eagles have to tackle far better than they have recently.

One thing to note on Jones: In 163 touches this season, he has fumbled five times.

With a depleted secondary, the Eagles have to get pressure on Cousins, or they could be in for a long day. When Cousins is pressured, he is far more likely to get rid of it than take a sack. In the past, that has led to a high interception percentage. The Eagles did not do a good enough job pressuring Cousins Week 4. On almost 50 dropbacks, the Eagles sacked Cousins once. They must force him into bad throws and win the turnover battle.

While they have played much better this season than in recent years, it is worth noting that since 2013, the Redskins have given up nine special teams TDs. Nine times.

The Skins' special teams rankings in each of the last seven seasons, via Football Outsiders:

This year, through 14 games, they're sixth.