Five matchups to watch Sunday between the Eagles and Bills 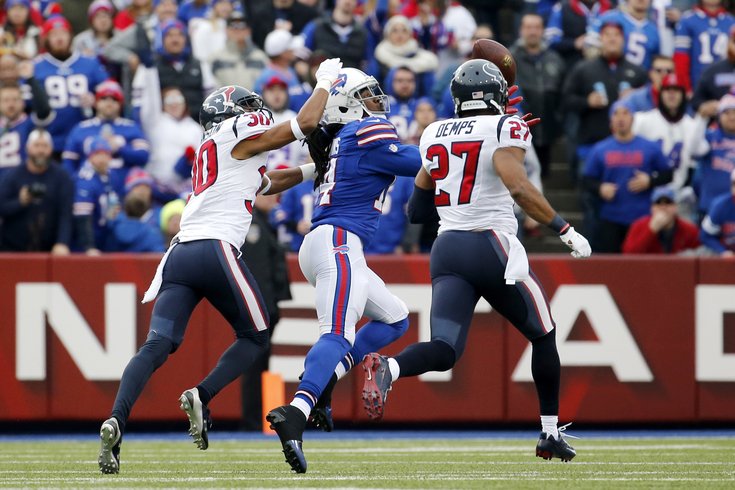 At 18.7 yards per catch, Bills WR Sammy Watkins is a dangerous deep threat.

Coming off a huge win last week in New England over the Patriots, the Philadelphia Eagles will close out their final AFC East opponent of the season, when they take on LeSean McCoy and the Buffalo Bills. Here are five matchups to watch on Sunday between the Eagles and Bills.

1) The Bills' rushing attack vs the Eagles' rush D

The Bills are the fourth-best rushing team in the NFL both in terms of yards per game (140.9) and yards per carry (4.7). This is not only the most intriguing matchup from a "storyline" perspective with LeSean McCoy's return to Philly, it's the most important matchup from a football perspective.

"Shady's on top of it right now," said defensive coordinator Bill Davis. "He's playing the best you've seen him play. He's peaking right now, like he does a lot of times; I think always in November and December, you've seen him be at his best. It looks like he's in great shape. They are feeding him the ball a lot. He's being Shady: he's making the cuts and stopping on a dime and changing directions and making plays when they aren't there. We are going to have our hands full and we look forward to the challenge. We know he's going to be at his absolute best. He’ll be the best blocker, the best runner and the best pass protector that you can be. He'll be fired up for this game, but so will we. We are excited about playing him."

As you might expect with a running quarterback like Tyrod Taylor and guy in McCoy who has routinely made huge plays throughout his career bouncing runs outside, the Bills do a tremendous job of running outside. For example, the Bills average 6.42 yards per carry when they run behind LT Cordy Glenn, which is the best YPC in the NFL behind a left tackle.

"Glenn is a complete left tackle, man," said Brandon Graham. "Big boy. 340. He's good at run blocking, man. I've just been trying to see how I can attack him against the run. They like to hold. (Right guard Richie) Incognito, that boy grabbing shoulders, pulling you, tackling you. It's crazy. For me, I just have to make sure I set the edge on the run game because (Glenn) is a big load.

"They got a big line. That's their key. They're going to try to come in here and run the ball, and we have to make sure that don't happen."

The Bills also do a great job running around the edge, where they average 5.16 yards per carry. The Eagles are going to need their corners to stick their nose in there and make some tackles.

"LeSean McCoy is obviously explosive," said Eric Rowe. "He's a perimeter dude, so me and Maxwell know that we're probably going to have to make some tackles. because he's going to try to bounce it on the edge, and I have to take that away from him."

Teams that try to run the ball as much as the Bills do will often get opposing defenses to sneak their safeties up closer to the line of scrimmage, and that's when they can beat you over the top. Sammy Watkins is a great deep threat who is averaging 18.7 yards per reception this season. While Watkins only has 34 catches so far on the season, he has begun to heat up recently. In his last two games, Watkins has 9 catches for 267 yards and 3 TDs.

"He's a deep threat, an explosive player," said Rowe. "A lot of double moves. He can start it up and he can go... My main focus is not letting him go deep, keep everything in front of me... I'll be seeing him a lot."

The Jets, Lions and Pats have all tested Rowe deep this season, and save for some freakish throws/catches by Matt Stafford and Calvin Johnson, Rowe has mostly been up to the challenge on those deep throws.

A season ago, the Bills had 54 sacks, which led the NFL. In 2015, they have had a drastic falloff in that a category, as they have only gotten to the quarterback 18 times, which is 29th in the NFL. Still, the Bills have players who can get there, most namely Mario Williams, who has just three sacks this season, but had 38 from 2012-2014 with the Bills.

"He's a freak of nature," said Lane Johnson, who will mainly face off against Williams this week. "He's big, a guy that can run, and has a pretty high motor. He plays hard. He's one of the best guys in the league and has been for a while."

In a pair of embarrassing losses this season, the Eagles were not able to contain interior defenders Ndamukong Suh (Dolphins) and Gerald McCoy (Buccaneers). They were often given one-on-one opportunities, and the Eagles paid dearly. Suh did things like this:

Against the Bills, they'll have another huge challenge against Dareus. The Eagles must make sure they have a pair of bodies on him as much as they realistically can.

5) The Eagles vs their own success

Previously this season, the Eagles played like crap the week after they've won a game. After wins over the Jets, Giants and Cowboys, they lost to (and looked bad against) the Redskins, Panthers, and Dolphins, respectively. Their win over the Patriots was an emotional win for a team that faced 10 long days of intense scrutiny after their third straight loss on Thanksgiving.

While that win must feel like a huge weight lifted off their shoulders, the Eagles have to forget it happened and stop feeling good about themselves after wins.