How much blame does Chuck Fletcher deserve for Flyers' god-awful season? 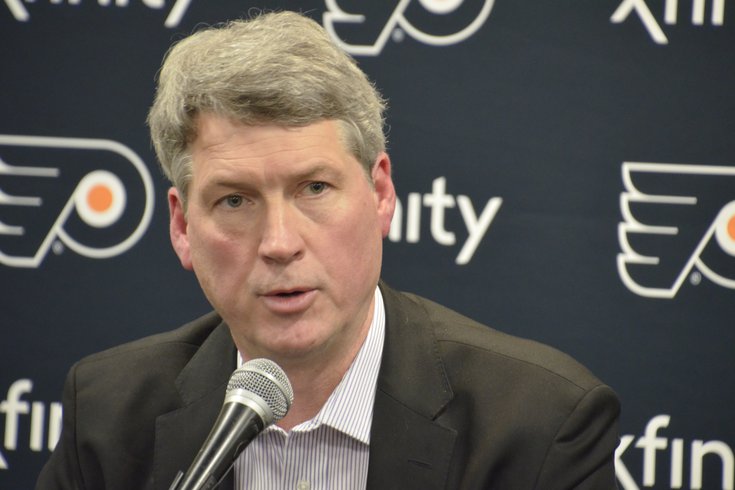 Chuck Fletcher walked into a strange situation when he took over as the Philadelphia Flyers GM in December of 2018. That would give him one calendar year before the world turned upside down and what was once “normal” in the hockey landscape became anything but.

In the time since his hiring, the Flyers have experienced some of their worst seasons in team history. How much of that falls on the shoulders of Fletcher?

It's not as if Fletcher is the one out on the ice nor is he the man behind the bench instilling his system among the players. So placing blame on a man who sits on a perch overlooking the ice isn't always an easy thing to do.

In this case, though, it seems as though a lot of the blame surrounding the current state of the team trickles back to Fletcher. Here's a look at some of Fletcher's biggest mistakes:

For starters, his first head coach hiring, Alain Vigneault, has already seen his time come to an end in Philadelphia. It's never a good thing to hire-and-fire your first choice in less than three seasons. To Fletcher’s credit, Vigneault did get this team to the postseason and a faux-No. 1 seed during the bubble playoffs, but that more or less looks like a blip on the radar at this point.

The choice of Vigneault was met with mixed reactions at the time of his hiring. In his previous stops, the French-Canadian head man was well-known as someone who isn't going to develop young guys. He was the kind of coach to take a veteran team on the doorstop to the next level. That wasn't really the case in Philly upon his arrival as the team had a very young defensive core and a handful of key 20-somethings up front, including a then-21-year-old Carter Hart between the pipes.

Now, Fletcher will have to begin a second hiring process with no room for error. Should the Flyers ownership even allow him to see this hiring process and ensuing rebuild through?

If the coaching situation is one check in the column as to why Fletcher may not be cut out for the rebuild, you can add another check (or two) to the roster construction of this team.

As Fletcher pointed out multiple times this summer, this was his first “normal” offseason as the Flyers GM. While that may also extend his leash since he truly has had a unique tenure since being brought on, so too has every other GM across the other 31 franchises.

With a chance to get his fingerprints all over this roster, he made a flurry of moves that all made sense at the time. Flipping Jake Voracek for Cam Atkinson looks like a win-win for both sides. The additions of Ryan Ellis, Rasmus Ristolainen and Keith Yandle all were heralded as a quick fix for one of the worst defensive units.

Yet, the majority of those moves now appear to be missteps.

Starting with Ristolainen and Yandle — two players on expiring deals — the idea behind those moves was fueled by the belief this team was a playoff team. Ristolainen was supposed to be a menace in a seven-game series and Yandle was going to be an impactful distributor on the man-advantage.

Now, though, neither of those things hold true and there's a real chance neither of them will be back, certainly not Yandle. All signs point towards Ristolainen wanting to be a part of a playoff team and who can blame him after years of floundering in Buffalo? Why would he choose to re-sign here?

Because of that it almost is imperative Fletcher ships him away at the deadline or risk losing him for nothing after trading the 14th overall pick from last year, a 2023 second round pick and Robert Hagg. Now he’ll have to do what he can to recoup some of that loss in March with a trade.

Trading for Ryan Ellis and his monster deal

Onto Ryan Ellis. Where to place blame here is difficult to determine. Injuries happen and are always impossible to pinpoint. In regards to Fletcher’s role in this, he's the one who acquired Ellis knowing the risk that was his injury history. After all, Ellis did miss 20-plus games the season prior and has appeared in just four this years.

Bringing in Ellis, who when healthy is a top pair defenseman, wasn't the issue. Having no backup plan was the problem. Ristolainen is a solid blue liner for all he brings, but when his issues arrived in Buffalo, it often had to do with him being forced to play top minutes against the other team’s best lines. He simply isn't the right fit next to Ivan Provorov.

So with Ellis out, it's been a rotating door — again — for Provorov in terms of his partner, one that even included Nick Seeler momentarily, who is someone that was out of the league last season.

Now the Flyers face uncertainty with Ellis long term, who still has five years left on his contract.

Jones was another guy brought in this offseason that had question marks upon his signing. He had seen his play noticeably drop off the last few years in San Jose, yet was given an opportunity here to play some heavy backup minutes alongside Hart. What has transpired since is a .902 save percentage, ranking 32 out of 42 goalies with at least 15 starts, and a 3.52 GAA that is second to last among that same group.

Now Jones will more than likely be traded at the deadline, marking another offseason move that likely will be undone, and in his place will see Felix Sandstrom the projected call-up to back up Hart.

The team had to make so many moves this offseason because of their lack of players waiting in the wings. Some of that falls onto the aforementioned lack of development, particularly with guys like Morgan Frost, Wade Allison and Sandstrom, each of whom have seemed to take longer than it was hoped to reach the next level. The same could be said for defenseman Cam York, who actually may be one of the more exciting players since being called up, which begs the question why it took so long for him to have his number called.

Outside of those names, there isn't a whole lot of top-end talent brewing in Lehigh Valley. This, of course, is an issue that precedes Fletcher but nonetheless, doesn't seem to have been corrected under his tutelage.

With all of these problems plaguing this organization, it's no wonder the team has played through some of its lowest points in franchise history. From a win-loss perspective, Fletcher has spearheaded two of the franchise's worst seasons over the past two tries, with this current run potentially rivaling the biggest failure of a season in 2006-07 when the club went 22-48-12.

Should Fletcher be let go?

With more changes set to come by way of another new head coach and a changing of guard, quite literally if the rumors of Claude Giroux being moved do come to fruition, should Fletcher be a part of the rebuild?

There's not a whole lot to draw from in his time that that gives off much confidence he can find the longterm fix for this. After all, this rebuild is going to take more than one or two seasons. There isn't a quick fix waiting in the wings nor is there a move or two to be made that will have this team in the playoffs.

Speculating that Giroux does, in fact, get shipped out, his return likely will bring in some decent picks and a player or two, but even that won't be the necessary band-aid they need. Giroux is their best player and whatever package comes back won't equal his production.

With all that being said, it does seem unfair to harshly criticize Fletcher after his offseason was met with more praise than push back, but the early returns on his first big run in the offseason are looking pretty dismal. If he has to spend the majority of this trade deadline making moves to rid himself of all the deals he made in the summer, does he really deserve another chance?

It's pretty tough to see this organization go through some of its worst stretches ever under Fletcher and believe he can be the man to fix it. The team is 38-44-16 since the start of last season with the fourth-worst GAA and one of the worst all-around special teams units that Fletcher admittedly said lacked the proper pieces in an earlier press conference this season. At some point the GM has to access his roster and have the skill to pinpoint where he can improve them.

So far, it doesn't seem Fletcher has his finger on the pulse of this team and for that, his time is likely coming to an end.