The 50-year-old drummer died in a hotel room while the band was on tour in Bogotá, Colombia, on Friday 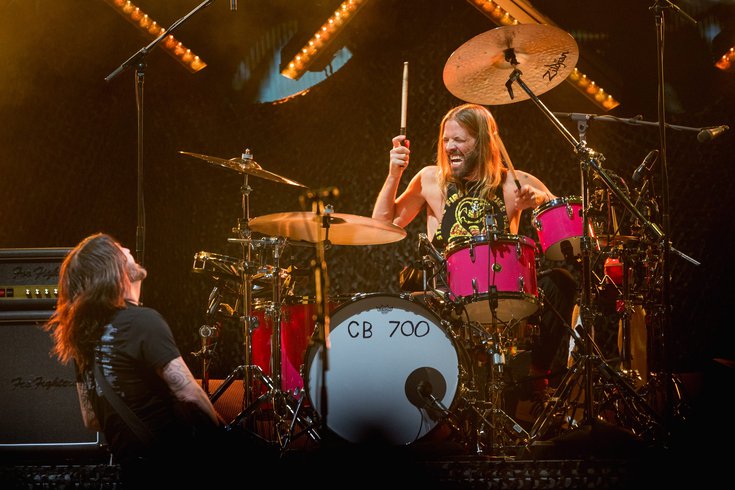 The Foo Fighters' scheduled show at Lincoln Financial Field in Philadelphia this summer is officially off.

The rock band said it has canceled all of its upcoming tour dates this year following the death of drummer Taylor Hawkins on Friday. The Foo Fighters were slated to make a stop in the city this July.

"We’re sorry for and share in the disappointment that we won’t be seeing one another as planned," the band said in a statement. "Instead, let’s take this time to grieve, to heal, to pull our loved ones close and to appreciate all the music and memories we’ve made together."

The Foo Fighters were scheduled to perform at Sunday's Grammy Awards ceremony, where the band is nominated for three honors. However, the group is no longer listed as a scheduled performer on the awards show's website.

Concertgoers who were planning to see the Foo Fighters in Philly this summer will automatically receive a refund for their tickets, according to Ticketmaster. Refunds are expected to be issued within the next 30 days.

The band had performances scheduled in North America, Europe and Oceania through December as part of its 2022 world tour.

The Foo Fighters announced the news of Hawkins death last Friday. The band's longtime drummer died in his Bogotá, Colombia hotel room. He was 50.

"His musical spirit and infectious laughter will live on with all of us forever," the band said last Friday. "Our hearts go out to his wife, children and family, and we ask that their privacy be treated with the utmost respect in this unimaginably difficult time."

Medical personnel were called to Hawkins' room, where the musician was suffering from chest pains. He was found unresponsive and attempts to resuscitate him were unsuccessful. Health officials said Saturday that a preliminary toxicology report found 10 substances in Hawkins' system at the time of his death, including opioids, tricyclic antidepressants, benzodiazepines and THC. An investigation into his death remains ongoing.

Hawkins' last performance with the Foo Fighters came on March 20 at the Lollapalooza Festival in Argentina. The band was scheduled to play at the Estéreo Picnic Festival last Friday as part of its South American tour.

Hawkins joined the band in 1997 and helped co-write eight albums. Along with playing drums, the musician also played piano and guitar, as well as provided vocals. He is survived by his wife Alison and the couple's three children.

The Foo Fighters' tour had come after the release of the band's 10th studio album, "Medicine at Midnight," last February. The nine-track record debuted at No. 3 on the Billboard Top 200 and No. 1 on Billboard's Top Rock Albums.

The album's single, "Waiting on a War," is up for best rock song and "Making a Fire" has been nominated for best rock performance. The band has already won 12 Grammys.

The Foo Fighters were inducted into the Rock and Roll Hall of Fame last year.