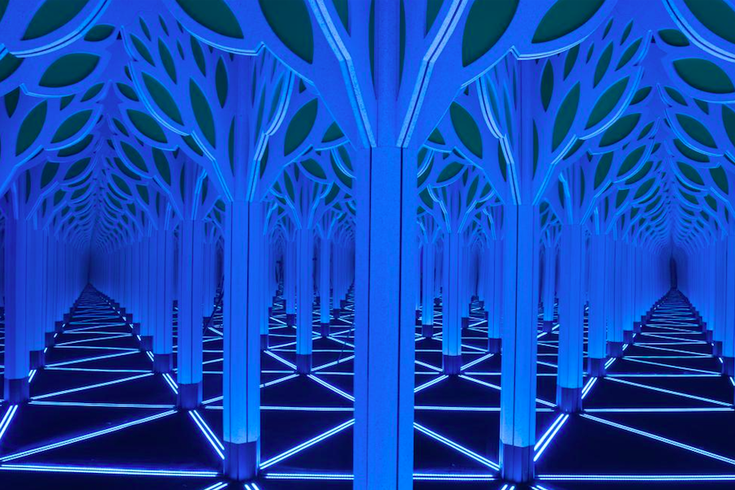 The Franklin Institute's "A Mirror Maze: Numbers in Nature" is open through September.

Go ahead, take a selfie. It's highly encouraged.

Instagrammers may have noticed The Franklin Institute's geotag popping up more often on their feeds lately, an intentional byproduct of its digital team after installing its newest temporary exhibit, "A Mirror Maze: Numbers in Nature."

The Mirror Maze is brand new to Philadelphia and open through Sept. 4. The installation is interactive and explores mathematical patterns in nature, like the ones seen in honeycombs or sunflowers.

But the main attraction may very well be the immersive, 1,700-square-foot maze with floor to ceiling mirrors.

Susan Poulton, chief digital officer for Franklin Institute, said the exhibit is well on its way to becoming the most Instagrammed exhibit that the museum has ever done, an important part of the institute's future long after the installation packs up and leaves.

"Between this exhibition and the Escape Rooms, we're really working to target the Millennial audience," she said. "That's a real target and for us moving forward."

Poulton said there are about 20 to 30 Mirror Maze-related photos posted on Instagram daily – and that's just the ones that are geotagged or use the official hashtags, #MirrorMaze and #FranklinInstitute.

It's not unlike famous art installations from around the world that gain notoriety in the digital age through Instagram, including Japanese artist's Yayoi Kusama's "Gleaming Lights of the Souls," New Yorker Christopher Chiappa's "The Amazing Egg" or the late California artist Jason Rhoades' neon light installations at Hauser & Wirth in L.A.

"The optical illusion of it is just phenomenal," she said.

While interesting, the mirrors may be tough to capture – that's why the Franklin Institute has set up an entire page on how to take the best pictures.

Throughout the summer, the museum is hoping to pull some of the most creative posts to share with others.

There's plenty of room for creativity, too. Poulton said there's many "Easter eggs" hidden throughout the exhibit, including panels that light up and even a hidden room that she hasn't even been able to find, nor has she seen Instagrammed.

"I think we anticipated a similar interest because it lends itself photographically," she said.

Tickets to "A Mirror Maze" are $25 for adults and $21 for children ages 3-11. Both prices include general admission into the museum.