From North Philly to Hollywood: kid shines in 'Jason's Letter'

New film tackles the issue of unarmed police shootings through the eyes of two young boys, one of whom loses his life in the process 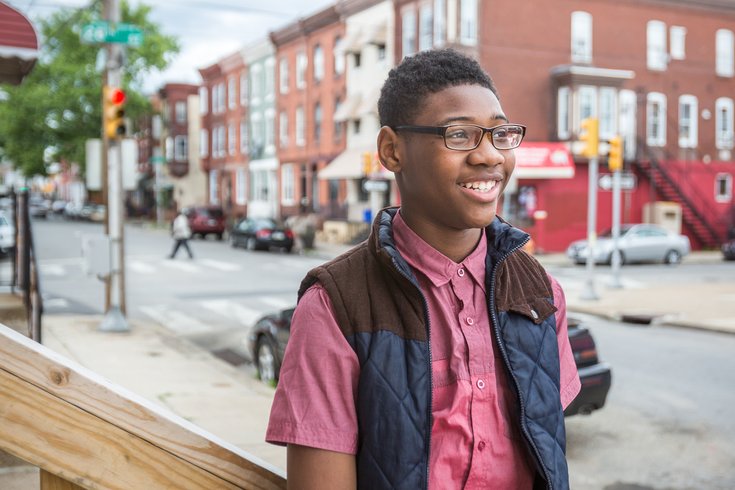 Philadelphia-native actor and comedian Jamol Manigault poses for a photo on the stoop of his family's Brewerytown rowhome. Manigault plays the character of Jason McKey in the upcoming feature film, 'Jason's Letter.'

At 12 years-old, Jamol Manigault works harder than most adults I know…and he got his start just six years ago.

At the time of our interview, the North Philadelphia native’s schedule is filled with numerous press interviews, including Fox29's "Good Day Philadelphia" and "The Q" daytime talk show. Although he usually can get out of school for interviews and events, that isn’t necessary today.

Spring Theory Charter School has had an early dismissal, enabling the theater major to devote the rest of his day to press and preparation. While the flurry of media attention is felt, Manigault is in his element – relaxed, lighthearted, and eager to talk about the film project that’s brought a PhillyVoice contributor and photographer to the home he shares with his mom and big sister.

When we arrive at the home, the door is slightly ajar, allowing the sounds of a full drum set to spill out from the living room, down the stoop, and into the streets. It’s an upbeat tempo with a steady bass, and behind the set sits a young boy smiling, motioning with his drumsticks for me to come in. Having once played the drums, I ask what else he has a knack for, and discover that he’s a jack of many trades.

Comedy, hosting, singing, acting, playing the piano, keyboard, organ, drums…the kid is an artist, through and through. After getting his start in his mom's feature film project at the age of 6, his budding love of the arts went into full bloom—even amongst the concrete surroundings of the family’s former residence at 22nd and Master streets (near the now demolished Blumberg public housing development).

“From having to walk to the corner store and a group of guys [would] be out on the corner—since I was already in acting at the time—it made me think, like, ‘wow, I don’t want to be like this. I want to have my own thing one day and I don’t want to even imagine myself being here," said Manigault.

The same day he came to that realization, he went home and created a list of all the things he wanted to accomplish in his life. In addition to creating a performing arts organization to keep kids off the street, he also included accomplishments that mirrored those of his greatest inspiration: Tyler Perry.

Who he is and what he’s experienced in his life differs greatly from Jason McKey, the character he plays in "Jason’s Letter," a new film by Terrance Tykeem, shot on location in Dover, Del. and starring notable talent such as Vivica A. Fox ("Kill Bill," "Independence Day"), Joseph Gannascoli ("The Sopranos"), and Robert LaSardo ("CSI: Miami"). While both boys are tweens, African-American, and must deal with the reality of living in a time where police brutality happens all too often, their differences are defining.

“It’s not just about police brutality, it’s about this young man. Jason--he’s very passionate [about] what he believes and he wants to make a difference and make a change in the world,” said Manigault.

It’s not just about police brutality, it’s about this young man. Jason--he’s very passionate [about] what he believes and he wants to make a difference and make a change in the world."

In the movie, which is based on an actual letter written by an 11-year-old boy in Ferguson, Mo., Jason’s best friend has been killed by a white law enforcement officer. The issue has plagued the predominately black and brown town that has a majority white police force, and, for years, City Council has been slow to address the issue. Feeling the pain of grief, fear for his loved ones, and conviction in his beliefs, Jason pens a petition letter as part of a school project that offers what he believes to be real solutions to the problem. He presents the letter to his uncle, who knows the City Manager (played by Fox), in hopes of presenting it at a City Council meeting. The letter turns the meeting on its head.

“[Jamol] hasn’t experienced anything on a personal level of the police killing of his loved ones or any of his friends, so it was a different role for him because he’s more on the comedic side,” said his mother, Sheila Barge.

“He really had to become a different person for this role.”

Barge, a single parent who sells pies to so that she can devote her time and energy to her son’s career and her daughter’s needs full-time, has worked hard to instill values of faith, integrity, respect, and hard work in her children.

And hard work is not something with which she’s unfamiliar. In addition to being a writer, Barge has pastored at her church, written and produced a film, been involved with stage plays and owned her own hair salon. The pies, which she’s baked and sold for the past 15 years, are simply a temporary means to an end.

“It’s how I maintain because he’s constantly in New York, I’m constantly buying him stuff to wear on different sets and all that. I still have my daughter—she has to be taken care of so you know I have to do what I have to do,” she laughed.

Her investment in his dream had already shown promise before this film (although this is a notable new level of achievement). Manigault has acting credits that include "Fences" with Denzel Washington, "Law & Order," Food Network’s "Chopped Junior," and rapper Fat Joes’ upcoming pilot, “Schooled by Fat Joe,” to name a few. The success that he has achieved thus far is the result of constant practice, studying, and prioritizing his schedule.

“I just keep going. I don’t stop and think about it. Sometimes, you have to just keep working until you can’t do nothing else,” said Manigault.

His dedication to the acting craft didn’t go unnoticed on set.

“He had a lot of work to do and just embraced it—he came and he was so prepared. When they’re young and you can see they're focused and they’ve got that desire, oh my goodness–it’s amazing to watch,” said Fox, via a phone interview.

“He’s got that fire, baby; he’s doing all the right things.”

He’s on his way to Hollywood. I do know that without a shadow of a doubt."

“He’s on his way to Hollywood. I do know that without a shadow of a doubt,” she said nodding her head as we sit on her couch.

“I want him to show the world, kids everywhere, that you can be successful, have what you desire, and still be out of trouble, and be a respectful example in society."

Manigault’s sights are certainly set on the future, but for the sole purpose of being able to look back one day.

“I want to grow up, have my own mansion, and look back over my life [and think]: I grew up at 22nd and Master in North Philadelphia [and] I had that one dream that I wanted to be something.”

Days later, I attended the premiere of "Jason’s Letter" at the Schwartz Center for the Arts in Dover, Del. At the close of the premiere, both Tykeem and Fox praised the cast for making the film possible. Jamol stood tall in a dapper, blue tailored suit and graciously accepted the thunderous round of applause that he received during his moment of being highlighted. During his brief remarks, he expressed his appreciation for Tykeem selecting him for the part and gave a big shout out to North Philadelphia.

In the brief time that I spent with him, it had never been clearer than that moment on stage that the kid from 22nd and Masters surely knows where he’s from…and exactly where he’s going.