The Pennsylvania-based company was selected as the top grocery store chain in the U.S. 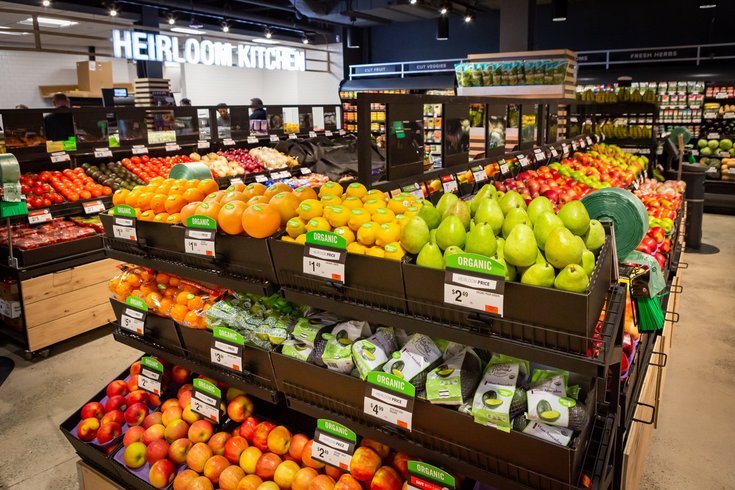 Giant Food Stores was named 'Retailer of the Year' by Supermarket News for its 'multi-pronged growth strategy' that includes the creation of its Heirloom Markets. Above is a photo of the inside of the Giant Heirloom Market at 2303 Bainbridge St. in Philadelphia's Graduate Hospital neighborhood.

Giant Food Stores was selected as the 2019 "Retailer of the Year" by Supermarket News, making the cover of the food industry publication's September issue.

Based in Carlisle, Pennsylvania, the 95-year-old company was selected as the top supermarket chain in the U.S., in part, for its "aggressive, multi-pronged growth strategy," the trade magazine said.

That strategy includes the opening of two of the grocer's smaller-format Heirloom Market stores in Philadelphia and plans to open four more by the end of 2019. The Heirloom Market at 3401 Chestnut St. in University City opened August after the concept – which is European-inspired and intended to feel more communal – debuted in January with a store at 2303 Bainbridge St.

The "urban-format concept" store is a fraction the size of a full supermarket and stocks a more curated selection of groceries.

Additionally, Giant announced plans for its first full-sized supermarket in Center City, a two-level, 65,000 square-foot store in July. The store is apart of the Riverwalk Development Project — a mixed use development on the Schuylkill River.

“GIANT’s sweeping strategy shows a retailer committed to its customers and well in tune with what it takes to grow and innovate in a highly competitive market,” said Michael Browne, executive editor of Supermarket News said in a press release.

Giant operates 181 stores under the Giant, Martin's Food Markets, and Giant Heirloom Market banners throughout Pennsylvania, Maryland, Virginia and West Virginia. The company has a total of 132 pharmacies and 102 fuel stations.

“Being named the 2019 'Retailer of the Year' by Supermarket News is a tremendous honor and is a pinnacle moment in our 96-year story,” Nicholas Bertram, president of Giant Food Stores, said in a statement.

The supermarket chain also recently invested $22 million to remodel four stores in Lancaster County and turned one of them into an "e-commerce hub" where shoppers can pick up to-go groceries and even select groceries via available tablets in the parking lot.