The Giants (reportedly), Cowboys (unofficially), and Washington have found their new head coaches 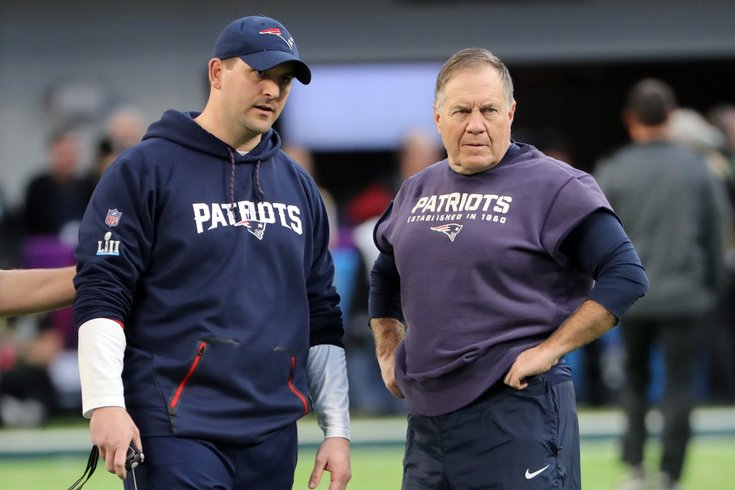 New England Patriots head coach Bill Belichick (right) and special teams/wide receivers coach Joe Judge, who will reportedly be the next Giants coach, survey the field before losing to the Eagles in Super Bowl LII.

After the each of the Philadelphia Eagles' three NFC East rivals had dreadful seasons in their own individual ways in 2019, the Cowboys, Giants, and Washington all fired their head coaches.

All three have now hired their new head coaches, so let's take a look at who they landed:

We'll start with Washington, whose hiring of former Panthers head coach Ron Rivera has been official for a while now.

Rivera has a career record of 76-63-1 (.546), which includes a Super Bowl appearance (and loss) after Carolina went 15-1 during the 2015 regular season. Rivera is a defensive-minded head coach, he is popular as a person in NFL circles, and is viewed as emotionally intelligent. It's a smart hire for a Washington franchise that has been anything but that during former GM Bruce Allen's roughly decade-long reign of terror, especially given the public standoff between the franchise and its best player, Trent Williams, this past season.

More important than the Rivera hire is that the team not only fired Allen, but they also wisely did not reassign him to some other role in the organization. He is gone, completely.

The Cowboys have unofficially hired former Packers head coach Mike McCarthy. The Cowboys believe they are close to winning a Super Bowl (rightly or wrongly), and Jerry Jones isn't getting any younger, so the hiring of a head coach with plenty of experience does not come as a surprise.

McCarthy has an excellent career record of 125-77-2 (.618), and he won at least 10 games in 8 of his 13 seasons in Green Bay, including a Super Bowl appearance (and win) after the 2010 season. However, many would view his lone Super Bowl win as something of an underachievement, considering that he had Brett Favre as his starter for 2 seasons, and Aaron Rodgers for 11.

The Packers fired McCarthy during the 2018 season, and an explosive story (mainly about McCarthy) emerged thereafter.

And finally, on Tuesday, it was reported that the Giants will hire New England Patri*ts special teams coordinator Joe Judge to be their next head coach.

New York Giants are finalizing a deal to make Patriots’ wide receivers coach Joe Judge their next head coach, league sources tell ESPN. Deal was in the works as of last night, which is another reason Matt Rhule took the Panthers’ HC job.

Bill Belichick's coaching tree has been less than awesome in the NFL.

On the front office side, somehow, Dave Gettleman gets to keep his job, despite being arguably being the most incompetent GM in the NFL. It's odd that the Giants would make the bold decision to hire a 38-year-old special teams coordinator to be their head coach, while simultaneously sticking with Gettleman. I don't understand the big picture plan here.