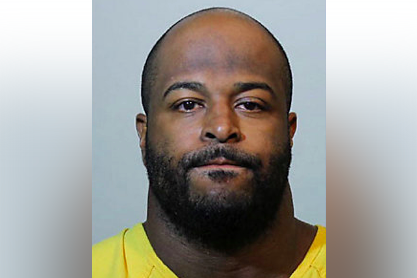 A member of the 2007 Super Bowl-winning New York Giants was arrested in Florida this week on charges that he possessed heroin and assaulted police during a chase.

Barry Cofield, 34, was arrested in Lake Mary on Tuesday after authorities allegedly found him asleep at the wheel of his Cadillac Escalade, according to MyNews13.

Investigators said Cofield, a 10-year NFL veteran who played defensive tackle for the Giants and Redskins, had his car stopped at an off-ramp with his foot on the break at a traffic light.

When police were able to get Cofield's attention, he allegedly refused to put his car in park and instead sped away through the intersection. During the police pursuit, Cofield allegedly side-swiped a police car.

Officers eventually cornered Cofield and found two bags of a red powdery substance in the pocket of his pants. The substance tested positive for heroin, according to the Seminole County Sheriff's Office. Cofield reportedly refused to submit to a field sobriety test when officers told him his breath smelled of alcohol.

Drafted by the New York Giants in 2006, Cofield was a part of the 2007-08 team that upset the New England Patriots in Super Bowl XLII. He signed a $36 million deal with the Washington Redskins in 2011 and returned to the Giants for his final NFL season in 2015.