One of these gems is just 12 miles north of City Hall, and worth exploring for a revisit to old Hollywood 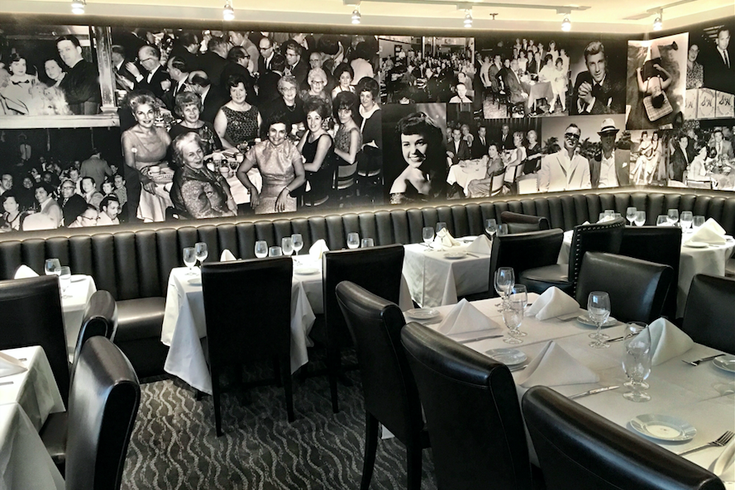 What sets Dino’s apart from any other local restaurant is the space that fills the right side of the complex, the Celebrity Room.

Let Philly have its buzzworthy, see-and-be-seen--in eateries. For some of us, the area’s coolest dining room is located some 12 miles north of City Hall, adjacent to Glenside’s beloved Keswick Theatre. That’s where Dino’s Backstage and The Celebrity Room has been recalling a far more “swellegant” era since last fall.

Boasting a plush décor, grown-up vibe and kitchen craft that cedes nothing to uber-chef operations from East Passyunk to Fishtown, Dino’s backstage isn’t just a great stop before a Keswick show, but worth the trip in its own right.

Co-owners (and marriage partners) Dino J. Kelly-Cataldi and Michael Richard Kelly-Cataldi have hit a home run with their concept based on the sexy, sophisticated supper clubs of the mid-20th century.

One enters into the cozy bar area, where classic cocktails are offered alongside of-the-moment concoctions. To the left is the main dining room, where patrons sup under large photographs of revelers taken some 65 years ago at Palumbo’s, the South Philly institution that, in its heyday, hosted the likes of Frank Sinatra and Tony Bennett. 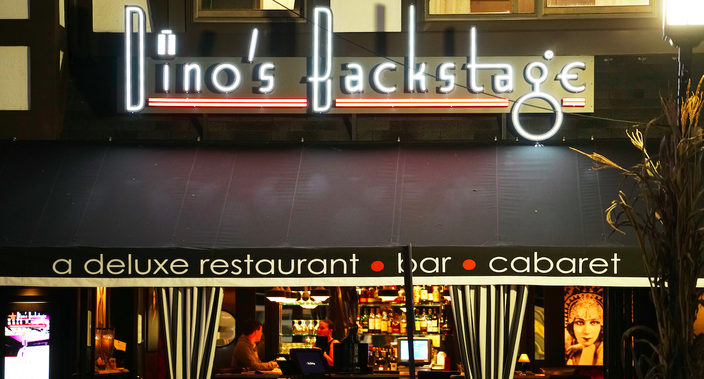 If this was the extent of the single-level establishment, that would be more than enough, as under the direction of chef Scott Howlett, the kitchen conjures a relatively small, but creative and delicious (at least those items we sampled during a recent visit) selection of appetizers and entrees designated on the self-illuminating menus as “Act I” and “Act II.”


Howlett makes changes every three weeks, so we can’t do too much recommending. But we can tell you that the Big Island Poke starter, a swimming-in-soy Hawaiian dish showcasing raw tuna that matches up favorably to that of any of the city’s top-shelf sushi joints, may very well represent the best $18 you’ll spend this year.

But what sets Dino’s apart from any other local restaurant is the space that fills the right side of the complex, the Celebrity Room.

The equally posh boite boasts a decent-sized, raised stage on which New York-style cabaret performers croon and purr their way through show tunes and jazz and pop standards backed by a trio as often as not led by pianist Tom Adams (who spent years as the musical director for actress Cybill Shepherd when she toured a nightclub act).

The talent isn’t just locally based. A particular favorite is 89-year-old, New York-based chanteuse Marilyn Maye, who returns for performances Friday through Sunday and again next Tuesday (for a St. Valentine’s Day program).

The ability to see top-shelf artists in a ridiculously intimate setting may be the best reason of all to check out Dino’s.

And, by the way, for those whose budgets may not accommodate the somewhat pricey menu, a reasonable $20 cover charge means dinner is an option, not a requirement.

Plenty of ‘Laughter’ at Walnut

No matter on what side you plant your political flag these days, there’s no denying we all could use a few more chuckles and belly laughs. Through March 5, a good place to find them is the Walnut Street Theatre, which is staging Neil Simon’s “Laughter On the 23rd Floor.”

The 1993 ensemble piece is the late playwright’s love letter to his early-1950s stint as a young staff writer on Sid Caesar’s epochal “Your Show of Shows”—whose other jokesmiths included comedy gods Mel Brooks, Larry Gelbart (creator of the TV version of “M*A*S*H”) and Carl Reiner.

Those familiar with Simon’s oeuvre won’t be surprised to learn the laughs come virtually non-stop from curtain to curtain (it’s doubtful there a lull of more than 40 seconds between any two punchlines). But funny lines are worthless if those reciting them don’t have the innate timing Simon’s snappy patter demands. The Walnut’s cast has that and then some.

There are no weak links in the ensemble, which provides a master class in ensemble comedy acting. Special mention goes to Frank Ferrante as Caesar avatar Max Prince, a pill-popping, booze-swilling comedic genius whose gargantuan talent is perpetually in a constant struggle with his many demons; Steve Perlmutter as Milt (representing writer Sheldon Keller) and, to absolutely no one’s possible surprise, Philly stage megastar Scott Greer as the hypochondriac, live-for-the-laugh Ira Stone (Brooks).

It is a real joy to watch these and the other pros go through their paces.

There are a couple of flaws: While Ferrante does seem to have Caesars’ hulking physique, some of the other actors, most notably Greer, are pretty substantial themselves; in real life, Caesar towered over his subordinates. And the Communist “witch hunt” led by Wisconsin Sen. Joe McCarthy is occasionally referenced, but this topic is never fully developed, thus rendering it somewhat superfluous.

If you leave the Walnut assuming much of what you saw came from Simon’s fertile imagination, know this: Many of the play’s silliest and most indelible moments—including two pairs of shoes tossed out a Manhattan skyscraper window and the punching of multiple holes in the writers’ office wall by Prince, are based on actual events.