Handing out 10 awards from the Eagles-Jets preseason game 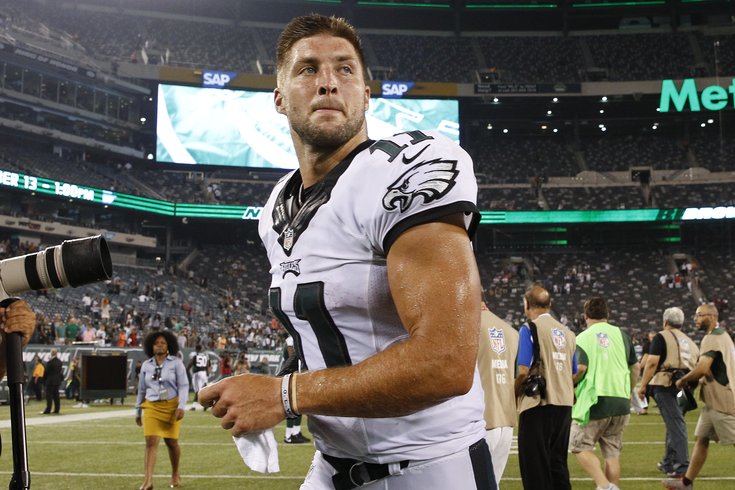 Tim Tebow strides off the gridiron, soaking in his triumphant victory in the most publicized #3 QB battle in the history of the Universe.

The Eagles finally lost a preseason game, which of course means that the season is ruined and riots will commence on the streets of Philadelphia immediately. Win or lose, as always, our 10 post-game awards!

The 'You Will Be Missed' Award: Kip Smith

Kip's knuckleball line-drive PATs were my favorite thing of the preseason. Kip Smith, you sir, will be missed.

Fans are going to go apes*** when Mostert doesn't make the team, like they did last year when Henry Josey didn't. (For the record, Mostert is way better than Josey). Mostert basically was the Eagles' offense tonight, getting 69 yards on 15 carries and 93 yards on 8 receptions. The Eagles had 33 rushes/receptions from non-QBs. Mostert had 22 of them (69.7 percent).

The take it easy award: Like, 36 percent of the team

I found the pre-game media sheet funny. Look at all the Eagles who were "not expected to play."

The 2008 Lions, the team that went 0-16, famous went undefeated that year in the preseason. By losing to the Jets, the Eagles avoided that same fate. Smart.

They played the opening theme song of "It's Always Sunny in Philadelphia" when the Eagles ran out of the tunnel before the game.

He's making the team. Congrats or apologies, depending on your feelings of Tebow.

It seems like whenever Bryan Braman gets pass rush opportunities in the preseason against opposing scrubs playing OT, he beats them badly on his way to the QB. I really would like to see him go against a first team OT here or there.

The 'Relatively Healthy' Award: The Eagles

The Birds stayed relatively healthy this preseason, which is really the best thing you can ask for. A few of the depth guys were lost for the season during training camp (Travis Long, JaCorey Shepherd), and some other guys got dinged up and missed some time (Zach Ertz), but on the whole the Eagles are in pretty good shape health-wise heading into Week 1 of the regular season.

Kiko played one series, was in on three tackles, and the Eagles got him right on out of there. Bring on the regular season.