Jefferson has spent the past year absorbing other medical systems as gleefully as Pac-Man gobbles up frozen ghosts.

In a span of just 15 months starting in 2014, the Philadelphia health-care system announced mergers with Abington, Aria and Kennedy health systems. Not to neglect the educational side of the equation, Thomas Jefferson University announced it will merge with Philadelphia University in December.

When all of these mergers are completed, Jefferson will control 11 hospitals and employ 29,000 people in Philadelphia, Bucks County, Montgomery County and South Jersey.

But what do these mergers mean for actual health-care patients?

"We talk about going from Blockbuster to Netflix — going from a situation where we're just bringing things to our main hospital in Philadelphia, to bringing what Jefferson brings to the table in research and care out to where people are," said Klasko.

"Hospitals allege — and economists like me are more skeptical — they think these combinations will be more efficient in some way, by sharing some services and sharing better management and access to capital and things like that," said Wharton economist Mark Pauly.

In his view: "There isn't much evidence that [this] happens. The much stronger evidence is that they raise prices, not that they do anything more efficiently."

Pauly's Wharton colleague Robert Town, for example, co-wrote a paper in 2006 which concluded that a wave of hospital mergers across the U.S. in the 1990s raised prices by at least five percent, with mixed evidence on whether or not the mergers affected quality. The research also found that "when two hospitals merge, not only does the surviving hospital raise prices but so do its competitors."

A 2015 study on the nation's largest integrated health-care networks, including Penn Medicine, found evidence that the presence of these large networks tends to raise hospital prices, physician costs and per-capita healthcare spending, with no difference in quality.

However, he added, "there can also be downsides as competition is reduced through partnerships."

'This is the hospital's counter-attack'

Hospitals in Philadelphia are merging for the same reason that insurance giants like Anthem and Cigna are merging: you need to be bigger to survive.

"Most people are forecasting that a small, freestanding hospital in a major urban area really has no long-term future. It's either going to be bought up or combined in some fashion with a larger entity or it's going to disappear — kind of like Catholic parishes," said Pauly.

Health-care providers are in a dance with healthcare insurers. The insurance companies are themselves merging so that they will be in a better position to demand lower prices from hospitals. Hospitals respond with their mergers to strengthen their bargaining power against the insurers.

"The Affordable Care Act tried to encourage insurers to compete for lower prices, and to some extent this is the hospital's counterattack," said Pauly.

However, the merger trend didn't just start after the Affordable Care Act was passed. It began in the 1990s with the rise of managed care. The term refers to when insurance companies take an active role in managing costs, for example by limiting provider networks.

"The main factor that has been driving it all along is the growth of managed care and the need for providers to have strength in numbers when they negotiate," said Robert Field, a professor of health management and policy at Drexel University. 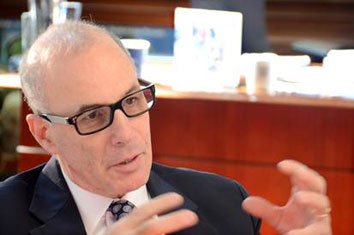 Klasko agreed that "there's a recognition that you probably need to be bigger to compete." He said Jefferson stands out from that national trend because "almost all of these were situations where people came to us."

Jefferson offers equal representation on its Board of Directors to the entities it has merged with. In three years, there will be no legacy members on the board from Jefferson, only members chosen by the combined board. That helps the systems form an integrated whole.

"They really feel like they're joining something, not that they're being taken over," he said.

Another factor behind the mergers is the need to keep up with the pace of technological innovation, like electronic health-care records.

"Health care is becoming so complex with information technology, genomics and personalized medicine, that you need giant behemoths to really provide it at a state-of-the-art level," said Field.

Like Pauly, he's concerned that mergers will increase costs, but he says the effect could be net positive "if they result in better-coordinated care and smoother adoption and use of advanced technologies."

Klasko said that the mergers have not led to job losses, but that instead Jefferson has hired more than 100 new employees for IT initiatives like telemedicine and the implementation of the new Epic software system.

Field expects that mergers in the Philadelphia area would have the benefit of leading to better coordination in care.

"Providers within a system will communicate with each other better. It will mean more use of electronic records," he said. "But it will probably mean higher costs because the bargaining power of the large systems will result in higher rates from insurance companies, which will probably be passed along to the consumers through higher premiums."

Klasko said that more "creative partnerships" with smaller health-care entities are likely in the future, but not necessarily "pure mergers."

The fact that Philadelphia still has four large health systems — Jefferson, Temple, Penn and Hahnemann — means there will still be a healthy amount of competition in the local health-care system. These big players have absorbed so many smaller groups, said Pauly, that the merger trend is likely coming to a close: "There isn't very much left in the way of loose change to pick up."

Plus, not every merger is forever. Jefferson once merged with Mainline Health, Aria and Einstein Health systems, then parted ways with all three of them for strategic reasons. Now, it's merging with Aria again.

"While people and organizations are working to position themselves most favorably for the short term," he said, "they could very well find themselves being bypassed and marginalized by systemic changes that could roll over them like a wave."