Imagine your bubbie's latkes getting a slightly healthier makeover 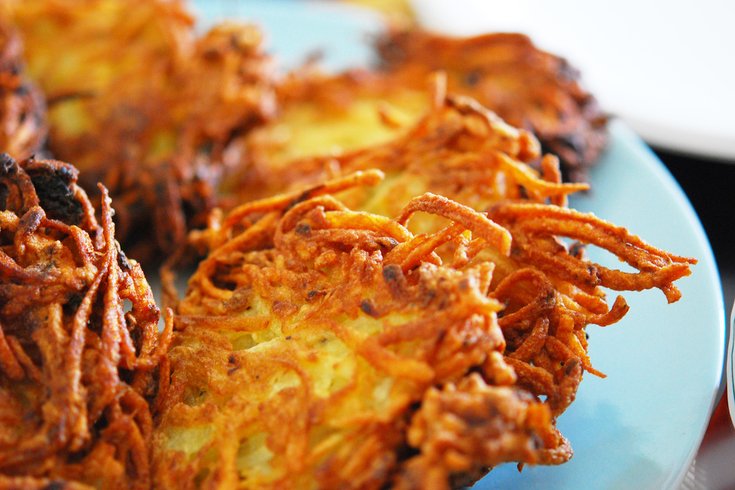 Latkes, or delicious potato pancakes, are a staple of the eight day-long Hanukkah celebration. But they aren’t the healthiest food on the planet — especially when paired with other Hanukkah delicacies like loukoumades and blintzes.

This year, have the best celebration yet by enjoying a healthier take on latkes. With these four recipes, you’ll get a healthy dose of vegetables, experience something new and maybe even discover a new Hanukkah tradition along the way.

This latke recipe is both vegan and gluten-free, which makes it a great option to bring to a gathering where you know someone is bound to fit into one of those categories. There’s always one person that will appreciate the thought!

All you need to get this latke recipe going is potatoes, onions, oats, oil and seasonings — it’s as simple as that! After your combine everything, you’ll form your latke patties and throw them in a 425-degree oven for a total of 30 minutes. This recipe should only take 50 minutes total! [via A Healthy Maven]

Even latkes can be made ketogenic! This recipe calls upon cauliflower to fill the place of potatoes in a traditional latke recipe, which makes these latkes a little bit lighter.

Grate half a head of cauliflower and combine with eggs, flax and scallions. Season to taste with salt and pepper and fry the latkes in a buttered nonstick pan. [via My Keto Kitchen]

A latke that is certainly not meant for the traditionalists in the room, these golden beet and leek latkes are a nutrient-rich take on the classic gnosh.

Shredded beets are mixed with sliced leeks, garbanzo bean flour and an egg to create the base. Seasonings like cumin, coriander and mustard seed up the ante in the flavor of these latkes while adding a slight Indian-inspired taste. [via The View from Great Island]

This veggie-filled recipe certainly isn’t for traditionalists, either. Brussels sprouts, of all things, stand in for potato in this offbeat latke recipe.

Shredded Brussels are mixed with an onion, four egg whites, lemon juice and chickpea flour to create the latke patty. Fry in oil and topp with a balsamic dijon sour cream. [via My Name is Yeh]