The popular chef's table and cooking school concept from North Jersey has made it here with a temporary location in Callowhill open through Dec. 19 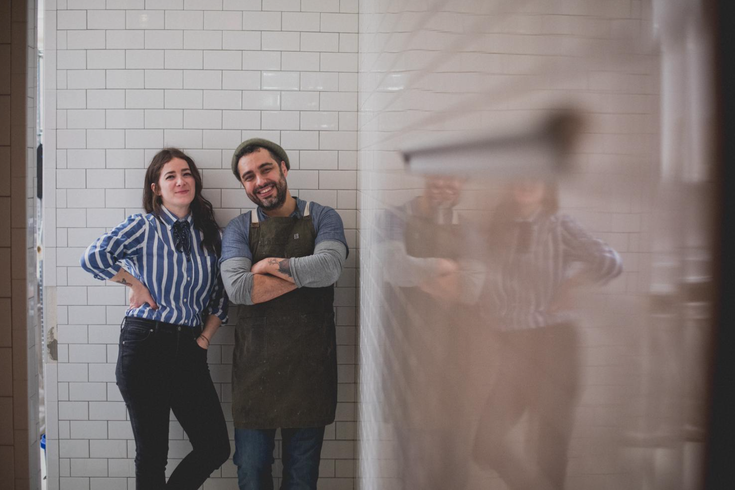 Heirloom Kitchen, an award-winning restaurant from Old Bridge, New Jersey, will have pop-up restaurant in the Callowhill neighborhood of Philadelphia, through Dec. 19, 2021. The restaurant is operated by Neilly Robinson and David Viana, shown above.

When the whispers of a potentially highly transmissible virus began nearly two years ago, no one could have foreseen the wide-ranging implications it would eventually come to have.

In particular, the service industry is feeling economic throes worse than at any other time in recent history, and countless people have had their businesses and lives flung into a nerve-racking limbo.

But now, with faint glimpses of a shimmering light visible at the end of what has been a long, dark tunnel, restaurateurs David Viana and Neilly Robinson are hopping back on the proverbial saddle.

The two are partners at Heirloom Kitchen, the popular, North Jersey, chef's table and cooking-school concept in Old Bridge, Middlesex County. Robinson, a Drexel grad, is the restaurant's owner and operator, and Viana, a 2018 James Beard nominee and former contestant on Bravo's Top Chef, is at the helm of the kitchen.

The restauranteurs were set to expand with a Philly location, and weeks before they were about to sign a lease for restaurant space in Callowhill, the COVID-19 shutdowns and stay-at-home orders took effect.

The pandemic ruined plans for a permanent location, but Heirloom Kitchen has made it to Philly with a temporary, pop-up restaurant that's open now through Dec. 19 at 931 Spring Garden St.

The award-winning restaurant prides itself on its "polished not pretentious" approach to all things culinary, and features an ever-revolving, seasonally driven menu where nearly everything from the bread to the mustard is made from scratch in-house.

Robinson founded Heirloom in collaboration with her mother, Judy.

"My mom was looking to figure out what she was going to do with herself because my dad fell in love with golf. She called herself a golf widow," Robinson joked. "I really had an entrepreneurial spirit, wanting to do something surrounded by food and I wanted to start my own business."

Heirloom began only as a cooking school and retail space, where they conducted classes and sold a curated selection of various kitchen-wares.

However, the business model was not working out exactly as planned, so Robinson sought to evolve and brought in Viana to create an elevated, weekend supper club.

"I was at a point in my career when I met Neilly where I almost was about to quit cooking," Viana said. "I'd been working for what I thought were unfair people. Thats the part of the industry people don't talk about, bad ownership and abusiveness. I was really at that precipice where I was very much considering not doing it anymore."

He has cooked alongside the likes of Bobby Flay and Michael White and has honed his skills in some of the finest restaurants in the world, including stints at Eleven Madison Park and two-Michelin-starred Villa Joya in Portugal.

"It was one last chance to pair up with someone who I was at interests with professionally and creatively," Viana said. "I thought this is someone who trusts me and we have synergy and if it doesn't work then I really wasn't cut out for this."

The pair soon found remarkable success, so they undertook the beginnings of what had been a long-standing dream for both of them, opening a restaurant in Philadelphia.

Robinson and Viana relish their time off by indulging in the extraordinary food found across the city, so they thought it only natural to expand and test the notoriously critical waters of the local dining scene.

"We accomplished a lot in the period that we've been collaborating and working in Jersey together and cultivating something truly special," Robinson said. "Philadelphia was just speaking to us. It felt like a city we would naturally integrate into without having to be something that we're not."

They found a space to house what would have been Heirloom Kitchen's new flagship restaurant at 930 Spring Garden St., and after a year and a half of planning, everything was finally coming together.

Then, two weeks before they were about to sign the lease the COVID-19 pandemic put the world on hold, everything shutdown, and their aspirations were tossed aside.

"I was gutted," Viana said. "It was pretty devastating."

They quickly had to switch gears and focus on keeping their original location afloat, putting their plans of a restaurant in Philadelphia on hold.

"We mourned, we got over it and then we were busy building up our business, almost like we forgot about it in a way," Robinson said.

As things settled down and life gained an appearance of something resembling normalcy, the landlord of their would-be permanent spot approached them with the idea of a pop-up.

After toying with the thought, they came to see it as the perfect chance for a trial run.

"For us, this felt like an opportunity to scratch this itch, to see if we really belong in Philadelphia," Robinson said.

The pop-up sits across Spring Garden Street in Callowhill from where they had anticipated on planting roots. It's the site of former W/N W/N Coffee Bar.

From now until late December, the kitchen will be cranking out a thoughtful, three-course pre-fixe meal for $55. The menu will include some of Heirloom's beloved dishes in an effort to show why they have gained such a crowd of fierce admirers.

They brought in friend and frequent collaborator Ricardo Rodriguez, known for his work at Miami's Broken Shaker, to create a list of unique cocktails.

With the first week already under their belt, Robinson and Viana say that business has been great and a slew of friends and community chefs have been swinging by to show their support.

"We're really happy with where everything is at right now, it's going better than expected, we're feeling lucky," Viana said. "We're definitely feeling the Philly love and we're really grateful for that."

With a little over a month to go, the team is focusing on the present, working diligently and enjoying something that has been a long time coming.

"In this moment, even having no idea what the next five weeks really looks like for us, I feel like this was meant to be," Robinson said. "We've been chewing at the bit for a month straight getting this thing opened and it's been extremely daunting, it's been a wild ride."