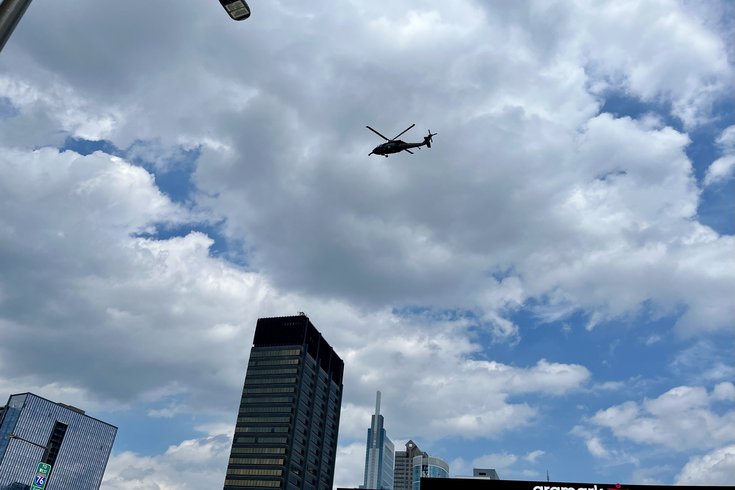 Military helicopters flying low above Philadelphia this week, like this one seen over the Schuylkill River in University City, are part of a military exercise led by the U.S Army. The drill is simulating chemical, biological, radiological and nuclear incident to coordinate emergency responses.

If you've seen and heard more helicopters than usual above Philadelphia this week, it's not your imagination.

Philadelphia's Office of Emergency Management posted a notice this week that the Dense Urban Terrain exercises had been scheduled for Wednesday, July 27, and Thursday, July 28 at a number of locations in the city.

The military helicopters over the city on Wednesday and Thursday are from the 28th Expeditionary Combat Aviation Brigade of the Pennsylvania National Guard.

Our 28th Expeditionary Combat Aviation Brigade is supporting a full-scale training exercise in Philadelphia today and...

The public has been notified that in addition to marked vehicles, helicopters and boats, there also will be role players with mock injuries visible near drill scenario locations. The exercises are scheduled between 9 a.m. and 3 p.m. and could result in temporary traffic delays and access closures.

The following locations are being used for the joint exercises:

Wells Fargo Center parking lots A, B, G and H are closed to the public on Thursday. Access also will be restricted at the parking lot at Linden and Delaware avenues at Pleasant Hill Park, as well as in the area of Kitty Hawk Avenue and League Island Boulevard near the Navy Yard.

During the exercises, drone usage is prohibited by the FAA at the locations noted above.

"This joint exercise is a culmination of nearly 10 months of planning highlighted by over two dozen steering committee and workgroup meetings between more than 18 local, state, and federal partners, all with the goal of working together to support the shared homeland security mission," said Dominick Mireles, director of Philadelphia's Office of Emergency Management.

"Training is an essential, core function of emergency management," Mireles continued. "It is critical that agencies across all levels of public service and safety have a common understanding of plans, resources, capabilities, and contacts through these combined practice operations in the event an actual emergency should happen.”