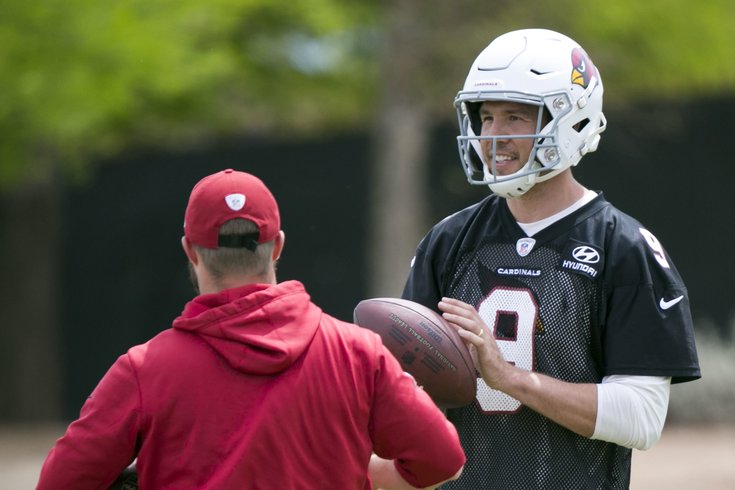 On Monday, Chad Finn of The Boston Globe fielded a team on paper of ex-New England Patriots that are still active on rosters around the NFL. It turns out that you could field a halfway decent team if you did that with the Pats.

Naturally, I wondered what such an Eagles team would look like, so I blatantly ripped off The Boston Globe's headline and made one for Philly.

Spoiler: The Eagles' version wouldn't be as good.

Ew. What a gross trio of quarterbacks that collectively thought they were worlds better than they actually were in their time in Philly.

This is actually quite a talented group of running backs that any team would gladly have on their roster, except for, you know, maybe McCoy with the recent horrible allegations made against him.

This is, or at least was, a good group of receivers at one time. Now? Meh.

Trey Burton was TE No. 3 in Philadelphia for years, before getting a huge payday this offseason with the Bears

Both of these guys were defensive ends in Philadelphia under Chip Kelly. Oops.

The former male model was only on the Eagles' roster for a hot second.

I have no idea how A.Q. Shipley has lasted in the NFL as long as he has.

Howard has had a long, mediocre career in the NFL, which is great for him, while Kelly will be remembered in Philly as the guy the Eagles traded for Dorial Green-Beckham.

Curry left for the Buccaneers after winning a Super Bowl with the Birds.

Logan couldn't wait to get out of Philly in free agency, and he ended up missing out on a Super Bowl run, while Thornton is still just kind of bouncing around at this point in his career.

Allen, like Curry, left the Eagles to join the Bucs this offseason. I had no idea Square was still in the NFL.

Barwin is back in the NFC East with the Giants after one year with the Rams, while Smith is continuing to carve out a Hall of Fame career in Seattle.

The Eagles haven't had much in the way of great linebackers over the last 10 or so years, much less linebackers that other teams wanted. Goode left for the Colts this offseason.

The Eagles released Kendricks this offseason. He reluctantly signed with the Browns.

My eyes! OK, Robinson was obviously very good for the Eagles last year. The rest? Oof.

Chung and Coleman stunk while in Philly, but have carved out decent careers elsewhere. Poyer and Countess were camp cuts that stuck with other teams.

Power Sturge was a good kicker for the Birds before he got Wally Pipp'd by Jake Elliott. Before him, the Eagles' kicker was Parkey, who went to the Pro Bowl as a rookie, but got beaten out by Power Sturge in training camp.

Wing never made the final 53-man roster, as Donnie J'owns easily dispatched of him.