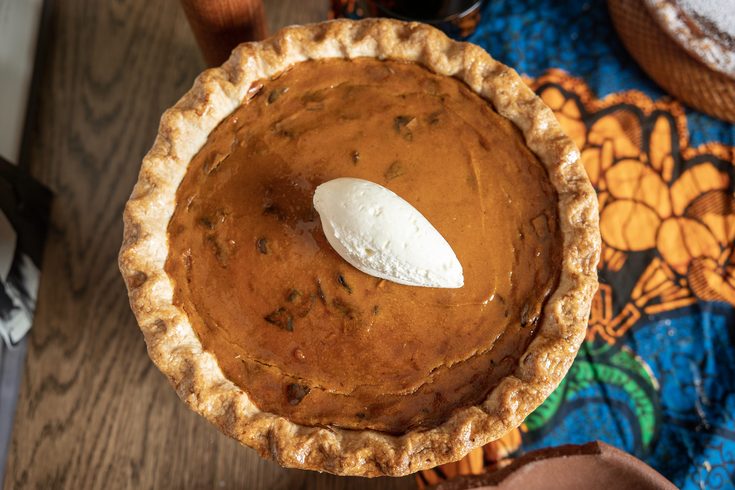 Honeysuckle Provisions, at 310 S. 48th St. in West Philadelphia's Walnut Hill neighborhood, will have a grand opening on Saturday. The sweet potato pie pictured above is one of two Thanksgiving pies the new café and grocery store has available for pre-order ahead of the holidays.

West Philadelphia will welcome a new café and grocery store this weekend with the opening of Honeysuckle Provisions, the innovative concept spearheaded by chef-poet Omar Tate and his wife, Cybille St. Aude-Tate.

The storefront at 310 S. 48th St., in the city's Walnut Hill neighborhood, will hold a grand opening celebration Saturday from 8 a.m. to 5 p.m. The café and market are dedicated to supporting Black cuisine and farmers, a vision brought to life by a GoFundMe campaign that raised more than $147,000 in two years.

Tate, a native of Philadelphia, is an alum of several restaurants in New York and Philadelphia, including Fork, A Voce, Meadowstreet and the former Russet. His "Cultivating Community" dinner series in Brooklyn began in 2017 and grew into the Honeysuckle Projects brand, which aims to amplify and create hubs for Black food, culture and history.

In 2020, Tate was  Esquire's "Chef of the Year," and he was included the following year among TIME's Next100 list. He's also been featured prominently on the Netflix series "High on the Hog," which traces the roots of Black foodways around the world.

"I want to shift the notion of restaurant to a concept that doesn't just feed people, but focuses on nourishment," Tate said in the YouTube video that accompanied his GoFundMe campaign for Honeysuckle Provisions. "Honeysuckle uses history, the arts, education, agriculture, commerce and food to pursue this mission. This is a multi-faceted concept."

Cybille St. Aude-Tate is a Haitian-American chef and children's book author who has appeared at New York's James Beard House on several occasions and formerly was cast on the Food Network's "Chopped."

The grocery store will be stocked with pantry staples and specialty items from proteins and produce to starches and condiments. There will be "Black Farmer Boxes" that serve as the market's variation of a CSA, with produce, dairy and livestock from Black farmers. The couple's own produce comes from their Elkins Park farm operated in partnership with Farmer Jawn. Some of the market's other regional farming partners are Black Farmer Fund network, Smith Poultry, Peculiar Big Farm and Plowshare Farms.

Other items at the store will include house-made seasonal breads and pastries, spices and a selection of cookbooks, incense, soap and candles.

Honeysuckle Provisions will operate through a partnership with The Enterprise Center's Dorrance H. Hamilton Center for Culinary Enterprises in Walnut Hill. The membership-based, shared-use facility has four commercial kitchens, a walk-in freezer and two refrigerators.

For Saturday's grand opening, breakfast and lunch will be available only for takeout. The store also is accepting pre-orders for its Thanksgiving pies, the Princess Pamela's Molasses Pie and the Sweet Potato Pie inspired by legendary jazz musician John Coltraine's favorite dessert. The market's website is still under construction, but pre-orders can be made by sending an email to orders@honeysuckleprovisions.com.

Regular store hours for the new café and grocery store will be Wednesday through Sunday from 8 a.m. to 5 p.m.