Chef Pat Alfiero has worked in some of the city's finest kitchens, and now he's partnering with local farms to craft cured meats on his own 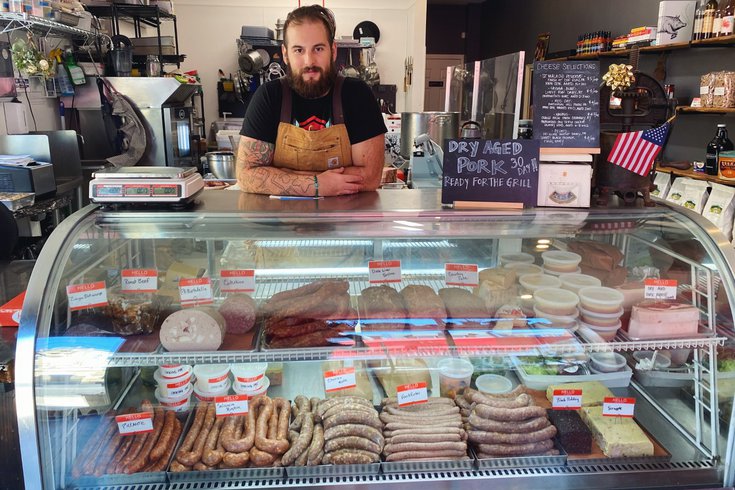 St. Anthony the Great was known for many things, like being a religious hermit who wandered an Egyptian desert for 15 years and, for reasons not entirely clear, hanging around a lot of pigs. You could consider Pat Alfiero a St. Anthony disciple of sorts, because he also spends a good deal of his time around swine – although they tend to be mostly dead and cut into pieces.

Alfiero is the mastermind behind Heavy Metal Sausage Co. in South Philly, which he characterizes as part salumeria, part deli stand. The case full of varied, delectable meats at the front of his small store on the corner of Porter and Mole streets, less than two blocks west of Broad Street, certainly lives up to that description.

On any given day, you can find an assortment of sausages (like rustica and piccante), deli meats (mortadella and leberwurst, for example) and charcuterie (pâté, terrine, etc.) lining the shelves, the vast majority of which are made in-house. Alfiero also takes it one step further by meticulously sourcing everything he uses from local farms scattered across the region.

The concept of Heavy Metal was not a new one; it had been gently simmering in the back of Alfiero's brain for a length of time. Cured meats first began tempting him during his days working the line on the opening team of Nick Elmi's Royal Boucherie in 2017. He put the idea on hold to further his career in the kitchen, but the pandemic would change things a few short years later.

Alfiero spent his younger days in Berks County hustling in restaurants and playing competitive ice hockey. After graduating high school, he traveled north to Minnesota to try out for a junior hockey league, but did not make the cut. He nixed his hockey dream and moved to Philly six months later to attend culinary school at Walnut Hill College and bounced around kitchens in the city after that, including stints at Oyster House and the now-shuttered Il Pittore and Meritage.

His Boucherie shift came to an end when Elmi offered him the position of chef de cuisine at In the Valley, the sisterly cocktail bar to Elmi's refined French bistro Laurel. There, Alfiero revamped the menu and started to delve into the intricate world of charcuterie. He bought a "really expensive f****** book" that was written by three Meilleurs Ouvriers de France – an award meaning "best craftsmen in France" – which is among the highest honors that can be bestowed upon a cook.

"The things that they can do are incredible," Alfiero said. "I remember just, like, staring at pictures of things and being like, 'How the f*** do you do that?'"

The charcuterie that most Americans are familiar with today does not, by any stretch of the imagination, provide an authentic representation. It is not a slab of wood layered with mass-produced meats and any number of accoutrements, like you see all over Instagram. Charcuterie has a long, rich history of artfully crafted preparations that date back thousands of years.

Excavations of ancient shrines in Narbonne and Bordeaux from the first century B.C. have sculptures depicting two would-be butchers preparing pigs for slaughter, surrounded by strings of sausages, black puddings and different cuts of pork. While other cultures had definitely been curing meat at various points, the term charcuterie – derived from the French words "chair" (flesh) and "cuite" (cooked) – was coined in 15th century France.

During that period, laws prevented charcutiers, or pork butchers, from selling uncooked meat, so they began salting and drying their products to be sold at a later time – which is how our modern notion of charcuterie was born. 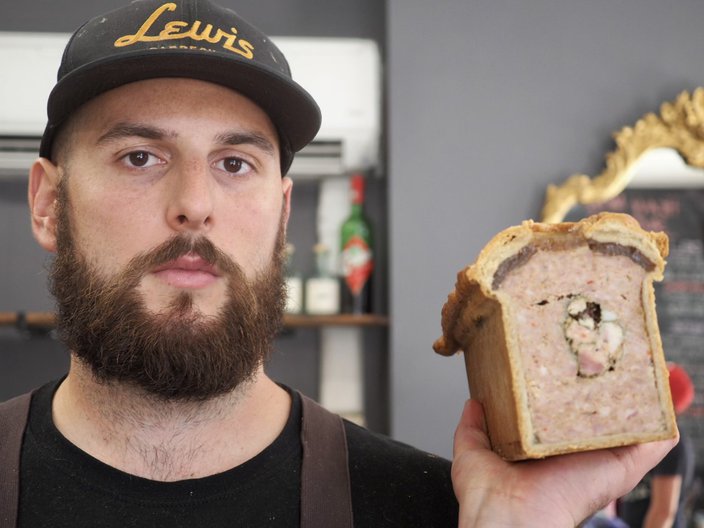 When COVID-19 turned the restaurant industry on its head, Alfiero made use of In The Valley's basement and started selling hot dogs to try and get some money in his pockets. The business did better than expected, so he put it under the Heavy Metal Sausage Co. name on the advice of his partner (and now co-owner) Melissa Pellegrino. In The Valley eventually reopened, but Alfiero decided to jump ship in order to pursue Heavy Metal full-time.

The two moved the newly minted company's operations into the kitchen at Underground Arts and hosted weekly pop-ups out of Herman's Coffee in Pennsport.

"That was our jam for, like, almost a year and a half," Alfiero said. "We started in the winter … We were just sitting outside in the f****** snow selling sausages to people. It was cool."

They found the shop where Heavy Metal now resides not long after and have been slinging meats ever since. The deli meats and charcuterie are particular points of pride for Alfiero, who has constructed his own recipes by patchworking together formulas from venerated French, German and Polish cookbooks.

Alfiero's rabbit pâté en croute is a prime example of a product that would be difficult locating anywhere else. Pâté en croute is a loaf of meat wrapped in pastry dough. However, such a simple description would be a disservice to its often-elaborate ornamentation and intriguing layers.

The process begins with shredding the leg meat from a rabbit, which is molded onto a small sheet tray to be wrapped around the animal's loin. That is wrapped into a torchon — a French word that translates as tea towel – and rolled into a cylinder. As it cools in a fridge, Alfiero grinds together the rabbit's kidneys and bits of pork that have been marinating in cherry vermouth. Spices, cream and eggs are then folded into the mixture, which is known as forcemeat.

A layer of the forcemeat is placed into the bottom of a mold that has been fitted with dough. The loin is rolled in herbs, placed in the middle and the remaining space is filled with more forcemeat. The finishing touch is a top layer of dough brushed with an egg wash. The end result, baked at 350 degrees for around an hour, leaves you with a rich, moist center and a crusty outer layer. 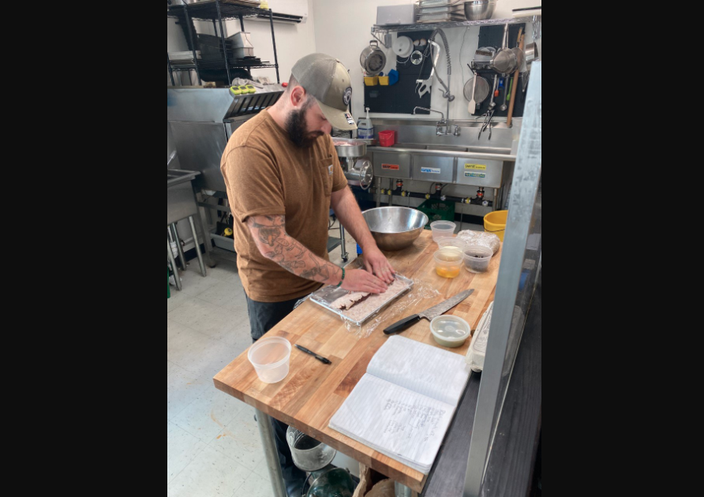 Like everything else at Heavy Metal, the individual ingredients of the pâté en croute have not traveled far – in this case from Chester County. The rabbit comes from Neighbours Farmstead in East Pikeland, the milk and cream are from Pigeon Creek Farm in East Coventry, the eggs from Horse Shoe Ranch in South Coventry – you get the idea.

Alfiero said he has a network of somewhere around 30 farms that he regularly uses to buy his ingredients.

Why he is so diligent about working with local farms, Alfiero said, "The easiest answer is, I think you're f****** stupid if you don't."

"I mean, it doesn't really make sense," he added. "It's kind of crazy to me that people don't wanna support local farms who are growing and raising incredible animals."

Alfiero does not mince words or hold back when voicing his opinion. His frustration is palpable when discussing the recent explosion of charcuterie-board businesses that grew out of the pandemic, and he recalled a certain occasion where he got into a spat with another shop when he felt it was doing a disservice to an old-world product by not making it correctly.

However, it's also clear that Alfiero's uncompromising point of views are rooted in his passion for food and what he does. He is hyper respectful of traditions and wants everyone to enjoy the very best products out there. It's not such a bad position to hold.

"People are always looking at how to allocate their money, and maybe spending more money on deli meat isn't necessarily something they're thinking about," he said. "It's somewhat my job now to educate people on why they should do that. Not just to buy my stuff, but just to buy better things."

While Alfiero isn't sure where Heavy Metal is going to take him, or where he is going to take it, he is perfectly content with headbanging to the shop's namesake music genre as he hacks apart pig carcasses and spreads the good word on supporting local farmers – at least for the time being.

Alfiero may not be considered divine in the eyes of the Christian church, and his name will probably never appear before a Vatican tribunal to join the likes of St. Anthony, but he undoubtedly deserves the holy praise of Philadelphians for the work he's doing at Heavy Metal.