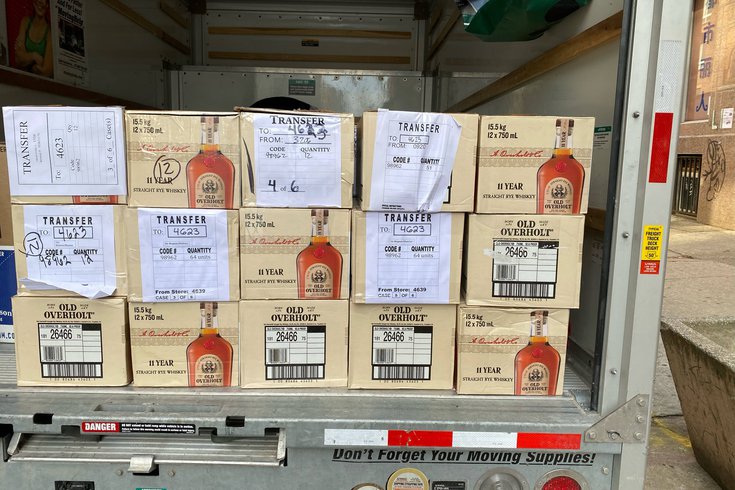 Lê, owner of Hop Sing Laundromat in Philadelphia, recently bought Pennsylvania's entire stock of 11-year-old Old Overholt rye whiskey. In total, the bar received 835 bottles. Above is a photo of the cases of whiskey loaded into the U-Haul Lê rented to get the alcohol to his bar.

One of Philly's most acclaimed bars is tempting whiskey drinkers with an exclusive opportunity to try a rare, limited-release rye.

The distillery had conducted a one-time release of 600 cases of this 11-year-old spirit in 2020 to celebrate the label's 210th anniversary. To honor the whiskey brand's roots, the cases were distributed exclusively in Pennsylvania and Ohio.

Old Overholt was founded in 1810 in West Overton, Pennsylvania, which is about 40 miles southeast of Pittsburgh. The company later relocated to Ohio before moving to its current distillery in Kentucky in 1987.

All the whiskey distributed to Ohio sold out. The whiskey was featured in Fine Wine & Good Spirits stores across Pennsylvania and was popular during the 2020 holiday season, but PLCB spokesperson Shawn Kelly said that the product did not sell through as quickly as anticipated. So the PLCB had these bottles sitting in distribution centers and Fine Wine & Good Spirits stores across the state.

A PLCB representative contacted Lê, the bar owner said, inquiring if he would be interested in purchasing some of the cases the state had been sitting on for nearly two years. The PLCB takes bulk purchase requests from licensees and consumers, Kelly said.

A deal was worked out for Hop Sing Laundromat to buy the state's entire supply, so long as the PLCB could ship it to one Fine Wine & Good Spirits store where Lê could pick it up.

The allotment was originally 841 bottles, but six bottles were broken during the trip, leaving a total of 835, Lê said, adding that he rented a U-Haul to retrieve the cases.

The bottles of Old Overholt were priced at $75 a piece, meaning that the entire stock was valued at about $62,000, according to Lê.

Lê said that he purchased the entire stock so his customers could enjoy the rare rye whiskey at a reasonable price. He also wanted to prevent out-of-state vendors from buying up the bottles and jacking up the prices in future years.

"I just hated the fact that someone from out of state would come in and take it outside of the state," Lê said. "People like me who live in this city, we'll never get a chance to taste it. This is supposed to be for us."

Hop Sing Landromat – known for its rules as well as its cocktails – of course has rules about how customers can drink their Old Overholt: The bar will only serve the rye whiskey neat.

Using the whiskey in a cocktail would be a complete waste, and it won't be diluted by melting ice, either, Lê said. A 2-ounce pour will cost $15.

Hop Sing Laundromat is at 1029 Race St., located behind a steel entry gate inside a signless commercial space. It opened in 2012.

The bar denies entry to anyone wearing shorts, sandals and flip flops. Inside, photos and cell phone use is not allowed. Breaking the rules or committing other misdeeds, like being a bad tipper or being too loud,  can land a person on the lifetime-ban list, which is thousands of names long.

Hop Sing Laundromat reopened in September after being shut down for 18 months during the pandemic. The cash-only speakeasy closed again in December to protect guests and staff as the omicron variant led to another surge in coronavirus infections around the holidays.

The bar reopened again at the beginning of February for service on Fridays and Saturdays with reducing seating and a limit on parties to a maximum of four people.

All guests must be fully vaccinated and present their physical vaccination cards upon entering the bar. Those who don't will be shown the door and directed to another nearby bar, Lê said.

Hop Sing Laundromat was named one of America's best bars by Esquire in 2019 and one of the greatest bars in the world by Conde Nast Traveler in 2015.