By Pat Ralph
PhillyVoice Staff
Government State Of The Union
from 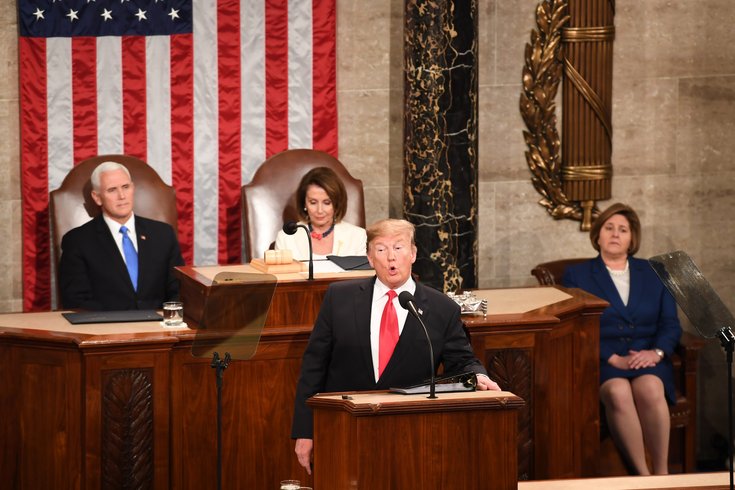 President Donald Trump will deliver his third annual State of the Union address to a joint session of Congress on Tuesday night, as Trump’s impeachment trial appears to be coming to an end and the Democratic presidential primary heats up.

Trump’s address will come in the very chamber of the  House of Representatives where the 45th President of the United States was impeached last month. However, the impeachment trial in the Senate is expected to result in an acquittal of all charges against Trump when senators are scheduled to vote on Wednesday.

Trump is not the first sitting president to deliver his State of the Union address in the midst of an impeachment trial, as former President Bill Clinton did the same in his 1999 address.

The State of the Union address will also come just a day after the Iowa caucus is held, when the first votes and delegates in the Democratic presidential primary will be cast. It also comes just days before the New Hampshire primary, the first of the 2020 election. Presidential candidates such as senators Bernie Sanders, Elizabeth Warren, Amy Klobuchar, and Michael Bennet, as well as Congresswoman Tulsi Gabbard are all expected to be in attendance.

Whether you’re a cord-cutter or have a cable subscription, there will be no shortage of options to watch and stream the State of the Union address on Tuesday night, which is scheduled to begin at 9:00 p.m.

How to watch the 2020 State of the Union address

How to stream the 2020 State of the Union Address

Most networks such as CBS, CNN, Fox News, and MSNBC will allow you to stream the 2020 State of the Union address if you have a cable subscription.

If you don’t have a cable subscription, there’s no need to worry. CNN, C-SPAN, Fox Business, and PBS will all have free live streams on their websites. Additionally, ABC, CBS, NBC, and The White House will all stream the 2020 State of the Union address on their respective YouTube channels.