Trailer for Adam Sandler's 'Hustle' is packed with Philly things; take our quiz to see how many you know 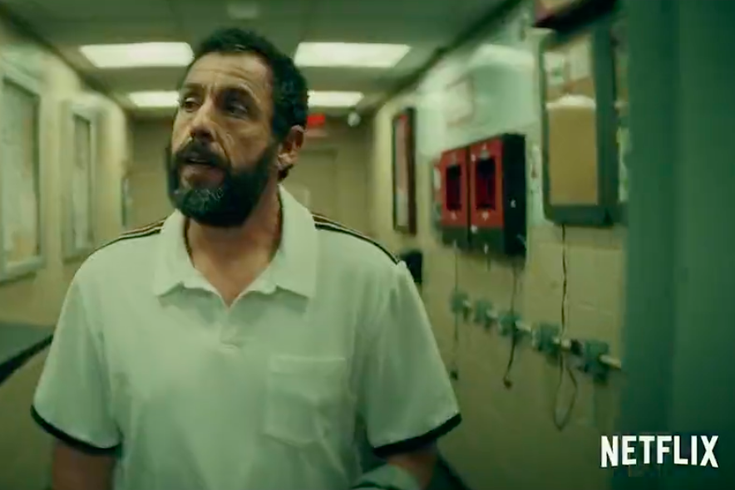 In the Netflix movie 'Hustle,' Adam Sandler stars as basketball scout who discovers a phenom in Spain and prepares him for the NBA. The movie, based in Philadelphia, includes cameos by several Sixers players.

Adam Sandler will shine a spotlight on the Philadelphia region for a massive Netflix audience this June with the release of "Hustle," a feature film from the streaming giant that spent the better part of two years shooting scenes at recognizable locations in the Delaware Valley.

On Friday, Netflix dropped its first trailer for "Hustle," a movie that stars Sandler as a basketball scout attempting to jumpstart the NBA career of a troubled overseas prospect, portrayed by NBA player Juancho Hernangomez. An opportunity surfaces with the Philadelphia 76ers, but Sandler needs to keep his guy motivated to catch on with the team – and at the same time save his own scouting career.

Sandler shared a tweet with the trailer on Friday morning.

Film crews working on "Hustle" were spotted in Center City, the Italian Market, North Philly, South Philly, Manayunk, Chester, Coatesville and Camden, and a bunch of the sights and sounds they captured in those places were packed into a trailer that runs less than 90 seconds.

Pay close attention to the movie clip and see how many Philly things you can identify. PhillyVoice has created a quiz that's at the end of this article and you can test your knowledge of the region.

The Netflix movie was co-produced by Adam Sandler's Happy Madison production company, Roth/Kirschenbaum Films and The SpringHill Co. The latter, which produced "Space Jam: A New Legacy," was founded by NBA superstar LeBron James and his close friends, Maverick and James Carter.

Sandler stars as Stanley Beren, a struggling NBA scout who attempts to revive his own career by taking a shot on the risky foreign prospect played by Hernangomez, who in real life plays for the Utah Jazz. Queen Latifah, Robert Duvall and Ben Foster are among the other leading members of the cast.

Directing duties were led by South Philadelphia native Jeremiah Zagar, who is following up on his critically-praised 2018 adaptation of the Justin Torres novel, "We The Animals," Zagar's father, Isaiah, is the artist behind Philadelphia's iconic Magic Gardens on South Street. His mother owns the nearby art space Eyes Gallery.

During the production of "Hustle," Sandler interacted with Philly residents and routinely visited local businesses in the city. The actor and comedian, famous for incorporating music into his standup sets, even purchased a pair of guitars at DePinto's in Fishtown.

Here is our quiz based on the "Hustle" trailer, and at the very end is another link to all the answers.

1. A character in "Hustle" wears a shirt printed with the name of a popular food establishment in the city. Name the restaurant?

2. The song that plays throughout the trailer, who is the artist and what is its title?

3. Name the current and former NBA players who appear in the "Hustle" trailer?

4. Where can this large Sixers logo be found?

5. Where is this mural of Allen Iverson and other Sixers greats located? Bonus points for naming the cross streets.

6. Hernangomez's character runs up steps in the trailer. Which two Philly neighborhoods do these steps connect? Bonus points for naming the street by which they are known.

A scene from 'Hustle' takes place at Capitolo Playground across the streets from Geno's Steaks in South Philly.

8. Where is Hernangomez's character shown running on in this photo?

9. Hernangomez also runs on the Manayunk Bridge Trail. It connects the city to which suburban town across the Schuylkill River.

10. This scene takes place inside the gym of a Big 5 school. Which one?

11. The gym where this scene takes place is located on the campus of which suburban Pennsylvania college?

12. The North Philly school where this gym is located opened in 1848. Which school is it?

Find the answers to the quiz here.