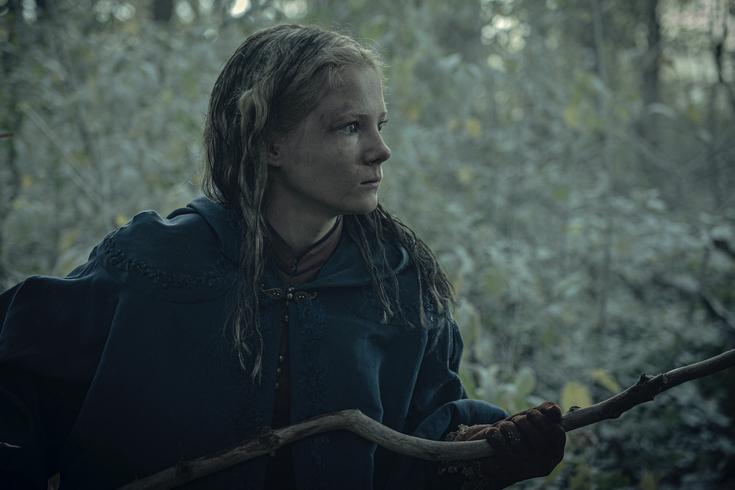 Freya Allan, above, played Princess Cirilla in Netflix's 'The Witcher.' The popularity of the series and her performance helped propel her onto IMDb's list of the Top 10 Breakout Stars of 2020.

IMDb, the popular all-encompassing resource for information on movies and television released its Top 10 Breakout Stars of 2020 — a round up of fresh talent along with long-time supporting characters who are getting their time in the spotlight.

Those who made the list were chosen for their placement on IMDb's STARmeter, which tracks the most-searched and most viewed actors on the site.

"Among the select group of stars who charted on IMDb's annual Top 100 list for the first time in their careers in 2020, these 10 stars consistently ranked the highest on the IMDbPro's weekly STARmeter chart throughout the year," IMDb said.

Fresh off the fashion runways, Diana Silvers became one of the top stars of the year for her supporting roles in "Booksmart" and "Ma" in 2019, and alongside Steve Carell in "Space Force," she brought "youthful energy and sarcasm" to the character of Carell's on-screen daughter, IMDb said.

Coming up in 2021, Silvers will appear in the ballet drama "Birds of Paradise," as well as Season 2 of "Space Force."

This breakout star earned her spot on the list for her role in Netflix's "The Witcher" — a show based on novels of the same name by Polish writer Andrezj Sapkowski. IMDb praised Freya Allan for her fresh take on Princess Cirilla, who had been portrayed as an older character in "The Witcher" video games.

She starred alongside Henry Cavill and will be returning for Season 2 in 2021. Allan also will be in "Gunpowder Milkshake," the 2021 assassin thriller in which she plays a younger version of Karen Gillan's Eva.

Golshifteh Farahani made her way to the mainstream in Ridley Scott's 2008 movie "Body of Lies" — making her the first Iranian star post 1979 revolution to star in a Hollywood production, IMDb said.

Farahani starred in Chris Hemsworth's Netflix hit "Extraction" as mercenary Nik Khan in 2020, and she will be seen in "Invasion" streaming on Apple TV+, a series inspired by "War of the Worlds."

Netflix said the show will be coming back for its second season in 2021.

Jurnee Smollett's acting career started in the '90s with her roles in "Hangin' with Mr. Cooper" and "Friday Night Lights," "True Blood" and "Underground."She made the list of 2020's Top Breakout Stars for portraying Black Canary in "Birds of Prey: And the Fantabulous Emancipation of One Harley Quinn" and Letitia Lewis in "Lovecraft Country."

Smollett will star in a sci-fi thriller "Spiderhead"in 2021 with Miles Teller and Chris Hemsworth.

Victoria Pedretti has had roles in Netflix shows "You" and "The Haunting of Hill House" — making her a familiar face to many streamers. It was her lead role in "Hill House" follow-up "The Haunting of Bly Manor" that shot her to the top of IMDb's STARmeter.

Pedretti will be returning to her role as Love Quinn in the third season of Netflix's "You" in 2021.

This actor brought what IMDb described as an appropriately "unhinged" performance in "The Wrong Missy," but her charitable act was the thing that secured her spot in the Top 10 Stars of 2020.

Lauren Lapkus won $500,000 on "Who Wants to be a Millionaire?" which she donated to the Crohn's and Colitis Foundation.

Bulgarian-born Maria Bakalova made her way to the top 10 this year after her fearless performance in "Borat Subsequent Moviefilm" as Borat's daughter.

Bakalova had starred in a few local productions before she stepped into the limelight and brought us to tears in the surprise sequel film.

Aidan Gallagher played a 58-year-old time traveler trapped in the body of an adolescent boy in the hit "Umbrella Academy."

IMDb credited Gallagher's hit one-liners and solo attempts to prevent the apocalypse for putting him on the list.

After Anya Chalotra's debut in Netflix's "The Witcher" as the sorceress Yennifer of Vengenberg, her name shot to No. 1 on the IMDb STARmeter for four weeks. Thousands were searching for her name on the site.

Chalotra will return for Season 2 of the show in 2021, alongside Henry Cavill and other breakout star Freya Allan.