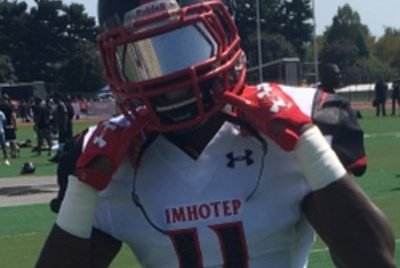 Philadelphia police have arrested a 15-year-old boy and a 16-year-old boy in connection with the fatal shooting of Kristian Marche, the former Imhotep Institute Charter High School standout who was gunned down in an Oak Lane driveway early last week.

Marche, 18, was shot to death on the night of August 13 in the 1800 block of East Pastorious Street. The football player and track star was just a day away from leaving to start his freshman year at Penn State University, where he had been recruited to join the track and field team.

At a press conference Wednesday afternoon, police said they had found one of two teenagers who were wanted in connection with Marche's death. They said the shooting stemmed from an apparent break-in attempt at Marche's home, where he was staying with a family member that night.

According to investigators, Marche thought he heard someone outside in the back of the house and saw one of the teens jump from the second floor of the home.

Marche went outside to confront the two teens, then returned to his home, police said. He later went outside again and found both teens in the area. As he walked toward one of them, the other remained behind him and shot him in the back of the head, according to police.

Davenport added that numerous residents called in tips to provide authorities with surveillance video they had of the shooting.

Investigators believe there Marche and the suspects had some acquaintance with each other prior to the shooting, but the nature of the relationship remains unclear pending an ongoing investigation.

The 15-year-old arrested Wednesday morning is not the individual who pulled the trigger, police said. He is still charged with murder, criminal conspiracy and related offenses.

The 16-year-old arrested Wednesday evening, Taron Small, was arrested without incident on the 2500 block of Carlisle.

Authorities are still searching for 16-year-old Taron Small of the 7800 block of Cedarbrook Avenue. Authorities said Small is the suspected gunman.

Both suspects in Marche's killing are expected to be tried as adults. Davenport said they have had prior contact with law enforcement, but he was unable to disclose specifics due to their ages.

Davenport lamented the city's high rate of teen gun violence over the past year, calling on the community to find a new approach.

"If a 15-year-old and a 16-year-old feel that it's okay to take the life of a very promising 18-year-old young man, whose parents and family no doubt did their best to bring him up in the right way, and were going to send him away to college the next day, what do we imagine is going to happen ten years from now? When these same 14- and 15- and 16-year-olds are now in their twenties?"