Instant observations: Sixers coast to win over Knicks behind 34 from Tobias Harris 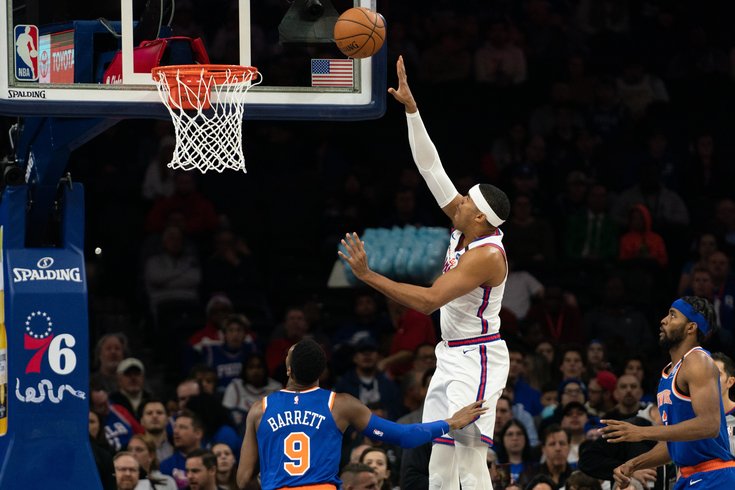 The Sixers picked up a much-needed bounceback win over the Knicks on Thursday night, with Tobias Harris pouring in 34 en route to a 115-106 win over New York.

• Tobias Harris was at the top of the heap of disappointments for Philadelphia in Wednesday's loss to Cleveland, and it was obvious he wanted to right those wrongs with his effort against the Knicks. From the opening whistle, Harris made it a point to get to his spots and demand the ball, and he got it going early with some easy makes from the mid-post and around the basket.

By the time the halftime buzzer had sounded, Harris had put up 23 points, and a lot of that can be attributed to his activity. Instead of standing on the perimeter and acting as a stationary target, Harris got to work as a cutter and had the offense flowing through him. This is how it should look for Harris when the team's two best players are out injured, and they paid him to help carry the offense even when they are at full strength.

The rarer sight was Harris coping well once the Knicks started to send extra pressure at him. Harris is mostly a one-read playmaker who makes the simple play, but he showed composure

He's obviously not going to shoot the lights out every game, but the Sixers have to figure out a way to tap into this version of him more often. Unlike with Al Horford, it feels like there is a path to him playing at a high level with the best version of this team, and the Sixers should spend this stretch without Joel Embiid and Ben Simmons encouraging him to play more selfishly. He shouldn't fade from view at any time, even if you have to live with some ups and downs in efficiency.

• There was a possession in the first quarter of Thursday night's game where Josh Richardson brought the ball up and spent the first 21 seconds of the shot clock dribbling his way to nowhere, only getting as far as about 15 feet from the basket. The result of his hard work was a contested mid-range look that predictably bounced off the rim for a miss, and the possession ended without anyone else on the team touching the basketball. He is not a point guard, and they can't move forward looking at him like he can play that position.

Not coincidentally, the best stretch Richardson had offensively came early in the second half, when the Knicks turned extra attention toward Harris that opened up gaps in the defense for Richardson to cut into. Without having to self-create as much — and with more open looks, naturally — it turns out Richardson looks much better.

Richardson is a pivotal swing piece for this team, and he has helped tie things together when they have been at full strength. And while we often talk about his weaknesses because of how much they've asked of him, it's worth saying he has been let down by the roster construction too. Putting more creative talent around Richardson would allow him to thrive in a role similar to the one he played in the final 24 minutes.

• There were still moments where I was taken aback at Al Horford's lack of explosion off of the floor, but this was a much better effort from him than what we saw in Cleveland on Wednesday. The indecisiveness and inactivity we have seen from him recently was gone in favor of a more engaged, more aware Horford, and his passing was the best we have probably seen it all season, with Horford dishing out nine assists in the win over New York.

It was probably as much of a relief for him to see some threes go down as it was for the fans of the team. We're all probably looking at his (and the team's) season much differently if Horford manages to hit threes at even an average clip, and perhaps this stretch without Embiid will allow him to rediscover his form and get rolling.

(Of course, this is the only stretch this year where he'll probably play center exclusively, which underscores that they shouldn't be forcing him into the power forward hole in the first place.)

• As the Sixers get less healthy down the stretch, the Shake Milton renaissance marches on. Similar to Furkan Korkmaz, you sort of always believed things might turn for him because his pedigree was too good and his form looked like it should translate without a lot of effort. But the proof is in the pudding, and only now has Milton finally started to deliver on that promise.

I remain dubious Milton is going to stick as a potential playoff guy, or even as a player who can stay on the court in tougher regular-season matchups. He gets lost on defense too often and doesn't have elite strength or speed to compensate for those awareness issues, and good teams will prey on that when the time comes. The good news for Philly is that they have a soft-ish closing schedule, so they should be able to get him plenty of reps to see if he sinks or swims in terms of reading the game.

• Furkan Korkmaz's in-between game is something that hasn't gotten a lot of pub this season, but it's a nice bonus on top of his floor-spacing and gives him an out when teams hug up on him at the three-point line.

• Without Joel Embiid and Ben Simmons (and predominantly the former), the Sixers do not have players who generate free-throw attempts. That isn't a problem on a night where shots are falling and the opponent is offering little resistance, but if the Sixers are going to spend time trying to get by without their two best players, they are going to have to manufacture trips to the line if they want to have any chance to beat good teams.

Free-throw generation, however, is generally not a thing that you can just wake up one day and get better at. It's a combination of ballhandling technique, leveraging physical tools, and a little bit of grifting sprinkled on top. The Sixers don't have good ballhandlers or guys who play physically on offense, and they definitely don't have anyone (sans Embiid) who is good at taking advantage of compromised defenders with moves like rip throughs.

• As I said last week, the tolerance level for Alec Burks around here is going to swing wildly depending on whether he's feeling it or not. At 2/10 for the evening, he was decidedly not feeling it.

• For the second night in a row, Kyle O'Quinn brought a needed jolt of energy from the bench on a team in need of any sort of spark. O'Quinn was jumping into the stands for loose balls, pulling down rebounds in traffic, and playing solid, if unspectacular defense at the rim. Unfortunately, his time on the floor in the fourth quarter coincided with the Knicks' last real run, and the Sixers had some 50/50 plays swing because he couldn't get his mitts around the ball.

In a strange way, O'Quinn is one of the few guys who actually benefit from Ben Simmons being out, as it allows him to leverage the things he is good at more often instead of trying to mold around Philadelphia's unique point guard. When he has played with Simmons in bench units this year, O'Quinn has spent a lot of time camped out on the perimeter, his value ebbing and flowing based on a three-point shot he is actively trying to develop. With the paint unoccupied right now, he's much better off.

• Horford did plenty of good things on Thursday night. But boy, the layup he smoked early in the fourth quarter has to go down as one of the most inexplicable missed shots I have ever seen from a center.

• We are still waiting for Glenn Robinson III's first made three since joining the team, which seems impossible for a guy who was shooting 40 percent in Golden State on decent volume. Or at least, it would seem impossible if the Sixers didn't trade up to draft a kid No. 1 overall because of his three-level scoring ability, only to watch his outside shooting touch disappear into Dimension X.

Defensively, Robinson III also hasn't exactly lit it up in Philly so far, which is arguably more disappointing after coming from a spot where he was guarding No. 1 options every night. He should be overqualified to guard the players he is on this team, but it hasn't quite translated yet.

• Moe Harkless hitting five threes in a span of about four minutes is something that would truly only happen to the Sixers. It wasn't even a function of poor defense or great shot quality, Harkless just randomly caught fire in the middle of the game and gave the Knicks a chance to stick around in a game they otherwise looked like trash in.