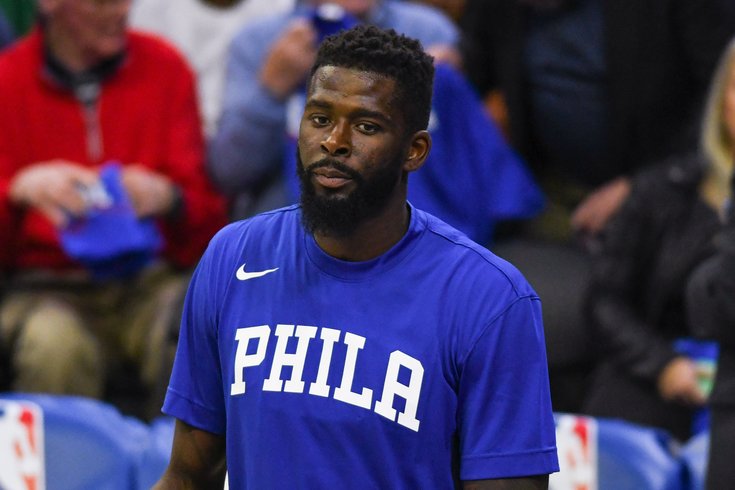 The Sixers have traded James Ennis to the Magic.

• Shake Milton threw a lob pass in transition that looked like it was destined to either fly off the backboard or go out of bounds, and then Ben Simmons showed up.

This is a stupid finish from Simmons.pic.twitter.com/MCT2SAND7D

This is obviously a play in transition, but the Sixers have used Simmons as an off-ball weapon a lot in the two games since he has returned from the shoulder injury. And when you watch him climb the ladder on lobs or explode toward the paint after setting a hard screen, you see how dangerous he can be if the Sixers make a concerted effort to use him that way on a regular basis.

• James Ennis isn't going to be confused by anyone with a microwave scorer, but he does enough things well off of the bench that he can help out in pretty much any lineup the Sixers play. When things get stagnant, he can attack guys in one-on-one situations and finish at the rim. When he's left open, he has shown over the course of his career that he's capable of hitting open looks, even if the numbers aren't there this year. And on a second unit featuring big-men passers like Al Horford or Kyle O'Quinn, he's a smart enough cutter to rack up open layups.

There are nights where his lateral quickness is an issue, but more often than note, he gives Philly good, professional minutes.

• You could apply that last bit about Ennis to backup center O'Quinn, who certainly has been on the bench player rollercoaster to start the year. But he had a hell of a first half against the Magic on Wednesday, picking apart Orlando with passing from the post.

His passing variety is pretty spectacular for a big man. He can hit you with the garden variety pass on a cut...

...or he can find guys with touch passes over the top, with the result all the same.

If Embiid ever turns into a plus-passer, look out, because the big men behind him are pretty exceptional.

That being said, he was very fortunate not to end up as fodder for this week's edition of Shaqtin' A Fool. He did a great job running the floor on a possession near the end of the third quarter, but he was inches away from missing the open dunk and ending up flat on his back. Count your blessings, big fella.

• I find it hard to categorize whatever it is Josh Richardson is doing on offense on a given night. On the one hand, his work in the pick-and-roll has been legitimately useful for the offense at times where it's stagnating, and with the Sixers getting wildly outpaced at the free-throw line on Wednesday, his aggression in the third quarter was the only thing that got them rolling there. The Sixers need someone who plays confidently on offense because many of their perimeter options are too timid.

He still has some pretty glaring issues when he masquerades as a lead ballhandler, but in fairness, they're a product of context and not really his fault. The Sixers paid Tobias Harris $180 million to be a high-level offensive player, and with Harris struggling to hit water from a boat, it forces Richardson into a bigger role than he should ideally be in. That leads to turnovers, stalled-out possessions and other jankiness, especially when the Sixers don't have Embiid as the outlet in those pick-and-rolls.

• The Magic have been a horrific shooting team all season, and it would normally concern me when another team busts out of a slump against the Sixers, but they made a lot of junk shots, honestly. The only players who really got open looks for Orlando were guys you'd want to goad into shooting, like Al-Farouq Aminu. Sometimes guys are just going to make a bunch of contested shots because they're NBA caliber players. So it goes.

(Of course, wouldn't it be nice if the Sixers' NBA-caliber players would occasionally have nights like this? That seems kind of important.)

• Horford has been excellent in most of the games without Embiid available, but he just could not find the range on Wednesday night. The Magic were able to settle into a zone throughout stretches of the game, in part because Horford kept getting wide-open looks from deep and bricking them, and he didn't fare a whole lot better when he tried to set up shop in the post against Nic Vucevic or Mo Bamba.

He didn't do a whole lot of making up for that poor performance on the defensive end, either, and the Sixers really could have used a "normal" Horford night in Orlando. Given how good he has been the rest of the year, I'm willing to give him somewhat of a pass, but the Sixers were dragging ass on the second half of a back-to-back, and with Horford well-rested after getting the night off on Tuesday, it was an especially bad game for him.

• Perhaps Harris is still dealing with the after-effects of the stomach flu Brett Brown claimed he had on Tuesday night, but that doesn't seem like a good explanation for another ineffective game on offense. He was gun-shy from deep a night after having a shocker against the Cavs, and rather than trying to shoot himself out of it, Harris chose instead to attack the teeth of Orlando's defense, and he had a rough time going against a bigger, more athletic Jonathan Issac.

When he finally found his courage as a shooter late in the game, he didn't come anywhere close to making shots. And that's when Harris found himself caught between two worlds, not wanting to let it fly but also not feeling confident as a driver, and it led to multiple turnovers that the Sixers couldn't afford in a close game.

It would be easier to write this sort of thing off if it wasn't for the fact that Harris has been bad shooting since arriving in Philadelphia last February. Is he as bad as he has been this week? Probably not. But that's setting the bar impossibly low, and the Sixers need him to be their standard-bearer on offense.

Here's the thing that makes this so tough — the Sixers' team construction basically does not work if Harris is not a shooter. He has to be the release valve for post-ups, the dangerous threat on the weakside when teams send extra help, the guy who is capable of hurting teams regardless of whether he is on or off of the ball. If he isn't, every concern with Philadelphia's team construction is magnified, and teams can just throw the kitchen sink at the paint.

It is not too soon to worry about this situation, let's put it that way.

• Simmons was not at the top of the problem list for the Sixers on Wednesday or anywhere close, but the Sixers would be able to survive bad games from the likes of Harris if Simmons was the sort of No. 1 type initiator title teams need to have on the perimeter. But in his current state, Simmons is far from that, and so the Sixers have to hand the keys of their fourth-quarter offense to players who ideally would be overqualified role players.

Harris' shiny new deal has made him the subject of criticism and scorn for the fanbase on a lot of nights, and rightfully so, but Simmons got a max extension of his own this past summer, and the difference between the two is that extension for Simmons is predicated on the expectation of improvement. So far, we have seen Simmons look like basically the exact same player as he was last year. That's not a death sentence for improvement moving forward, of course, but development from Embiid and Simmons should be the driver of improvement of this team. Horford certainly ain't getting any younger.

There's a lot of season left, and it was the second night of a back-to-back on the road. But the Sixers believe they have one of, if not the best lineup in the NBA. Perhaps they should start proving it. Embiid or not, they should have enough to beat an Orlando Magic team that can barely score. But the loss looked the same as most of their games this year — an offense with no punch with a defense that can let them hang around for a while. They can win regular-season games that way, but they're a long way from possessing a playoff-caliber offense.

• Markelle Fultz's jumper is still broke as hell. The Sixers spent most of the first half going under screens and using players like Furkan Korkmaz to guard him, and his only perimeter shot was an abomination.

That said, his flaws are not as impactful within Orlando's team context, and he's clearly better off in a smaller, quieter market. Best of luck, kid.