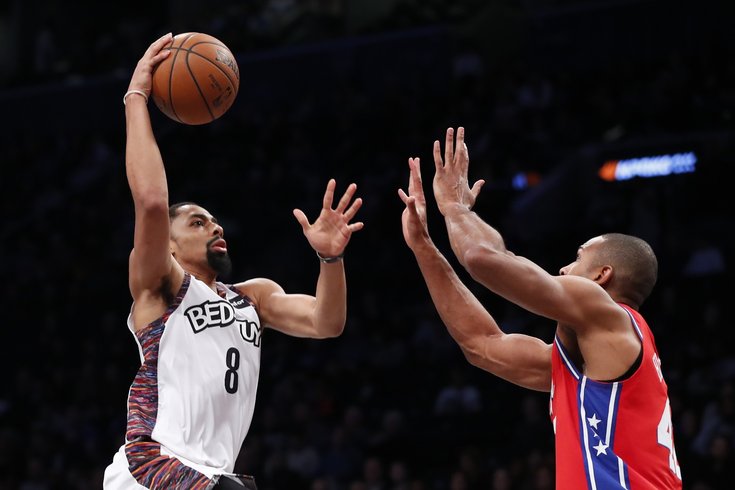 Brooklyn Nets guard Spencer Dinwiddie (8) goes to the basket against Philadelphia 76ers center Al Horford (42) during the first half at Barclays Center.

The Sixers got blown out by the Nets 109-89 on Sunday night and it didn't even feel that close. Get well soon, Joel Embiid.

• I am willing to give Tobias Harris a bit of a pass for the uneven performance on Sunday night, as he's one of the only players who has given them consistent efforts night in and night out on both ends. He had some ugly turnovers against the Nets, and there are no excuses for the unforced errors, but guys are entitled to bad nights every so often.

• The Eagles won on Sunday, so they still control their playoff destiny.

• Norvel Pelle lands on my good side simply because he was one of the only Sixers players who was remotely entertaining. Didn't exactly make any sort of impact toward winning the game, but thank you for helping me fight off some weariness at the end of a long day.

• Ben Simmons came into this game with the right approach on offense. Brooklyn put a lot of smaller bodies on him, and he went right to work making them pay for doing so. His kick-outs to shooters were supplemented by trips to the rim and even some tough attempts in traffic, which needs to happen every single night but especially during games without Joel Embiid. He should always go down swinging.

With Al Horford drawing dead on defense for most of the night, Simmons was one of the few guys who offered him any help around the rim. Perhaps the Sixers should have tweaked the matchups to get him on Spencer Dinwiddie, who torched them as is custom, though I don't think there was a perfect solution to be had with such poor rim protection.

And now, the critique. He still has to figure out a better plan when other guys are posting up. The promise before the year was that he would spend more time in the corner preparing to shoot, and the Sixers need to make him do that. He's not helping anyone lingering near the paint and allowing his guy to send easy help/doubles.

One thing we haven't talked about here much is how he responds to officiating, which has gotten considerably worse this year. He spends a lot of time gesticulating at officials and picks up some really dumb frustration fouls after he doesn't get a call on the offensive end, which probably isn't helping the case he wants to build. There are few guys in the league who can get away with that sort of stuff, and he could look to Joel Embiid for a better method — he does a lot of his complaining in softer conversations on the side instead of trying to embarrass the official.

• The Sixers badly need Josh Richardson to get going again, because he is not the same player as he was before the hamstring issue. He seems a little bit out of sorts on offense at the moment — there were a couple of opportunities for him to shoot open threes in the first half Sunday that he overthought or never really recognized, and the possessions would end up stagnating and ending with much tougher looks.

I don't know if I would say he has any issues with explosiveness, as he has flashed that at times over the past few games, so it doesn't seem like a lingering issue is holding him back. He ties a lot of things together for the Sixers on offense, so they need him to get right sooner rather than later.

(One thing I will give him credit for: Richardson played hard and tried to claw the Sixers back in the game in the fourth quarter despite it looking like a futile effort from the beginning. He may be in a funk, but he still puts in the work.)

• We are back on the bad side of the rookie see-saw with Matisse Thybulle, who spent a good chunk of the first half in Brooklyn getting cooked by former Sixers player Timothe Luwawu-Cabarrot, who isn't particularly good at basketball. That's life in the NBA sometimes. You can lock up a bunch of All-Star caliber players and earn the trust of thousands of fans, but every so often you're just going to get burnt by some crap journeyman who has your number that night.

No reason to panic, obviously, these things happen. Like Richardson, I also thought Thybulle siked himself out of an open three or two over the course of the game, and they were definitely shots in his wheelhouse.

• A look that I would like to see more time with — Simmons playing next to Raul Neto in the backcourt. Sunday is the first time I can recall them going to this look outside of the end of the Toronto game when they desperately needed a ballhandler to beat their full-court defense.

It did not go especially well against Brooklyn, partially because the Sixers spent some of those minutes posting up Horford during a miserable night, but it is a structure that has merit on paper. If Brown doesn't like that combo, they should at least give Trey Burke some more minutes next to Simmons, because those lineups have killed in limited minutes. Having more ballhandlers is a good thing.

• We'll get into the personnel-based problem below, but I don't think the Sixers did themselves any favors with how they asked Al Horford to defend the pick-and-roll against Brooklyn. They play drop coverage quite frequently, but against a team with vertical bigs like Jarret Allen and DeAndre Jordan, lingering in the middle ground between the guard and the big is a good way to prompt the guards to toss lobs over your head all night. That's exactly what happened.

• The Sixers were without Joel Embiid because of an illness on Sunday night, and then Thybulle was ruled out for the rest of the game on Sunday night as a result of some sort of stomach bug. This may just be a product of being too close to the subject, but it feels like they've been the sickest team in the league for years. Somebody teach these dudes to wash their hands or get them a bigger dose of Vitamin C. Orange juice is a miracle worker.

The whole team played as if it was sick, so maybe that's the excuse they'll roll out for that miserable performance.

• My goodness, was that a craptastic game from Horford, who looks like he might need a little more time to rest and recuperate. I didn't have any problem with his shot selection or the fact that he missed a bunch of threes — he was wide open on most of them and would be expected to make a few on variance alone. But the other end of the floor was a disaster, with Horford not doing much to put out fires on the defensive end.

Philadelphia had a really tough time stopping Brooklyn from getting into the paint, which was not all Horford's fault. The Sixers did a poor job of fighting to get over screens, which left Horford in the unenviable position of trying to stop guards in space. But he's normally pretty damn good at that task, and he barely made an attempt to do so Sunday evening. When you play a style of defense built around funneling drivers toward your shot blockers in the painted area, they have to do their job or you're screwed.

I will never criticize a guy for trying to play through issues/pain to help the team (even if it's not often wise), but a mid-December game against the Brooklyn Nets is not all that high on the priority list. With Horford looking as slow and robotic as he did, I am surprised the Sixers continued to put him out there. Accept that you have an uphill battle and move on.