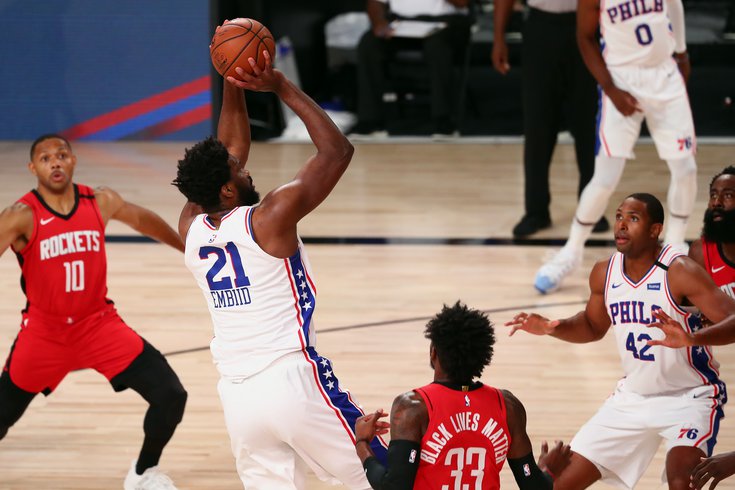 The Sixers used a meaningless finale to get some reps for their starting lineup heading into the playoffs, blowing out the Rockets, 134-96, with a comprehensive performance on Friday night. More importantly, they emerged unscathed.

• Alec Burks has really settled into a groove in Orlando, and after watching the first half of Friday night's game, I wonder if he ends up getting closing reps for Philly at some point. Shake Milton checked out of the game only four minutes into the first quarter, and Burks got extended time for the rest of the half, handling the ball with several key lineup combinations for Philadelphia.

He has more than earned an opportunity at this point. Burks has been part of an offensive resurgence for Philadelphia, and the increase in pick-and-rolls combined with a spread floor has been a boon for him. Joel Embiid's big body makes it hard for guys to get around screens, and Burks has both the burst to get to the rim and the quick trigger to take an open three if he wants it. It helps that he's canning a lot of those jumpers — it has almost felt like he can't miss at times in Orlando.

The most important development, however, has been Burks taking care of the basketball while picking up playmaking duties. Perhaps it's a product of the spread floor, but his reads have been crisp and Philadelphia's shooters are getting some wide-open looks when teams have cheated to help on his drives. Having someone who puts that pressure on defenses is huge for this group.

The hot streak can and will slow down at some point, but I'm buying Burks stock for now.

• A few possessions here and there won't be enough to sway my stance heading into the playoffs, but Matisse Thybulle did a hell of a job defending James Harden on Friday night whenever he had the chance to pick him up. Maybe he deserves a shot on Jayson Tatum and the bigger Boston wings after all.

It was a typical Harden night for the most part — 27 points, a handful of insane passes, and a dollop of grifting — but Thybulle nearly stopped him dead in his tracks. Considering Harden's ability to put guys in foul trouble and use the slightest reach to punish you, it's remarkable that Thybulle was able to avoid getting baited.

For the last week or so, Thybulle has also jumped off the screen with his activity. There were a lot of plays that stand out, but one in particular: with the Sixers leading 111-77 and the game well out of reach in the fourth quarter, Thybulle tore down the floor in transition and broke up the Rockets attack, creating a run out the other way.

Those are the type of plays made by guys who value opportunities to get better, who you might bet on to grow as the years wear on.

• Maybe it's just because they were playing a run-and-gun Rockets team and got sucked into the moment, but I liked the aggressiveness Tobias Harris and Josh Richardson had hunting threes. If you're asking me, I would 100 percent rather live with those two being a little too trigger-happy as opposed to passing up good looks and settling for contested midrange shots.

As long as it's not coming at the expense of Joel Embiid getting his touches, these two need to let it fly.

• The three-man triumvirate of Joel Embiid, Al Horford and Tobias Harris showed me everything they needed to for a meaningless regular-season finale. In this new-look lineup sans Simmons, they are taking advantage of the increased opportunities they're getting. Let's run through them real quick.

Horford looks better on defense with each passing game, and though he let a few guys go for easy layups on Friday night, his agility in space is as good as it has been all year. On offense, we're seeing what he used to kill the Sixers with when he played for Boston — reliable three-point shooting, passing on short-rolls and from the elbows, and even some quality post work sprinkled in.

Embiid had some ups and downs against Houston, but he didn't waste a lot of time drifting to the perimeter and had it in his mind to get near the rim and either shoot or draw enough attention to free his shooters. We're going to see how he holds up against a spread floor with the lineups the Celtics roll out there, but outside of some grimacing with his wrist, a pretty smooth night.

And Harris has settled into the scoring role the team has needed him to fill all season, which is perhaps the most important development of all. He's not a free-throw drawing machine yet, but there has been a pointed effort to initiate contact over the last week or so and that's a needed part of any playoff scorer's repertoire. The harder he makes guys like Tatum and Jaylen Brown work in round one, the easier defense will be for the whole team.

• If Furkan Korkmaz shoots a billion percent from three (all numbers approximate) in the playoffs, he'll stick in the rotation.

• Here's something we haven't been able to say on a lot of nights this season — the Sixers were ready to rip when the game started and took what was otherwise a meaningless game and tried to build something. It wasn't a balls-to-the-wall, 100 percent effort, but it was a professional showing. Count your blessings with this group.

Offensively, this team looks as crisp as they have all year. That's probably due to some changes with what they're running, but the personnel blend makes a difference too. With Milton in the starting lineup and Burks off of the bench, they have more ballhandlers on the floor than they've had at any other time.

And as we touched on previously in the Celtics series preview, I like that they're sprinkling in some showing/hedging against pick-and-rolls recently. They're going to be up against some high-level creators in round one, to say nothing about if they advance, and they need changeups to throw.

Of course, Winston Wolf had a line about this in Pulp Fiction. If performances in meaningless games translated, Sam Bradford would be headed to the Hall of Fame. This group has a lot to prove in the weeks to come.

• As a thought experiment, I quite enjoy the Houston Rockets. They're taking the way basketball has been going for years and just taking it to its logical endpoint, using big wings as their big men and going all-in on spreading the floor.

However, it makes it a bit easy to go all-in on that sort of experiment if you're just allowed to slap down on the wrists of other big men all game. The Rockets hacked and pulled and swung at Embiid whenever he was in the game and trying to set up shop, and while Embiid had his own issues with establishing position, it complicates matters when the opponent is allowed to do whatever they want to stop you.

Anyway, get off my lawn, etc.

• Josh Richardson needs to be roughly three times better than he has been on defense in order for the Sixers to have a shot against the Celtics. James Harden had a field day attacking Richardson on Friday night, burning him off the dribble, beating him on backdoor cuts, and forcing other Sixers teammates to bail him out or take fouls throughout the evening.

When you consider the night Thybulle had against Harden, it doesn't leave Richardson with a lot of excuses for his night.

• I already took a pretty clear stance on this earlier in the week, and I'm not going back on it, but I'll say this: if the Sixers looked as crisp offensively with Embiid out of the lineup as they have with Ben Simmons out of the lineup, there would be a lot more people ready to ship the big fella out at the first opportunity.

There is a lot of space on the floor in spite of the post-up center occupying the paint. You'd have to be blind not to notice that.