Patrol officers were enforcing social distancing guidelines and other rules 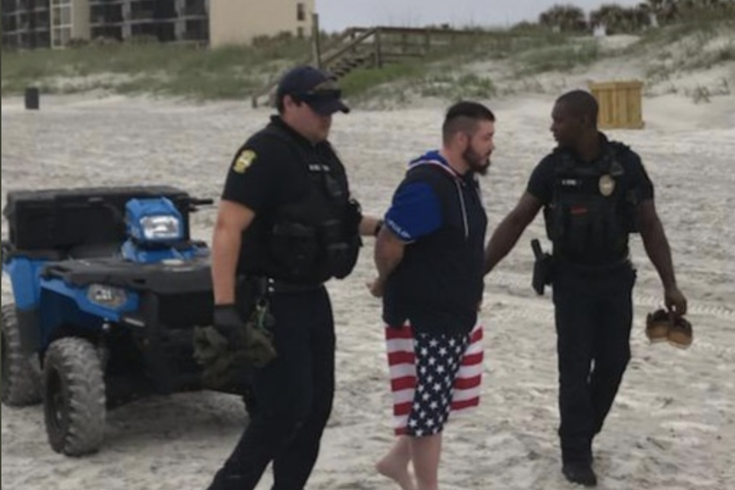 Mario Matthew Gatti, 30, was arrested in Jacksonville, Florida on a fugitive warrant for a homicide outside of Pittsburgh. Gatti was arrested by officer patrolling the beach and enforcing social distancing guidelines.

A Pennsylvania man wanted for a January homicide was arrested in Florida on Sunday morning by Jacksonville Beach police, who were patrolling the beach to enforce social distancing guidelines during the coronavirus pandemic.

Authorities found Mario Matthew Gatti, 30, after they approached him for loitering close to the dunes.

When police ran Gatti's information, who was dressed in American flag swim trunks when police approach him, they found he had a warrant out for his arrest in connection with a homicide in Arnold, Westmoreland County, about 20 miles away from Pittsburgh, the Florida Times-Union reported.

This morning while officers patrolled the beach proper they captured a Fugitive from Justice, wanted in Arnold, Pennsylvania for Homicide. Good job! pic.twitter.com/JKRmHFTydw

On Jan. 16, Gatti allegedly shot and killed 33-year-old Michael Coover Jr., according to the Pittsburgh Post-Gazette. The two men knew each other, investigators said. Gatti was wanted on homicide, burglary, weapons and related offenses.

It wasn't clear what motivated the the alleged incident, but both Gatti and Coover had prior criminal records.

The beach arrest comes as Florida faces scrutiny for reopening many of its beaches during the past several days, despite ongoing concern about the spread of COVID-19. The state has 26,660 confirmed cases and 789 deaths as of Monday morning. In Duval County, where Gatti was arrested, there have been 863 cases and 15 deaths reported.

Gatti also faces charges of giving false information to a law enforcement officer and drug possession. He was booked into Duval County Jail as a fugitive from justice.