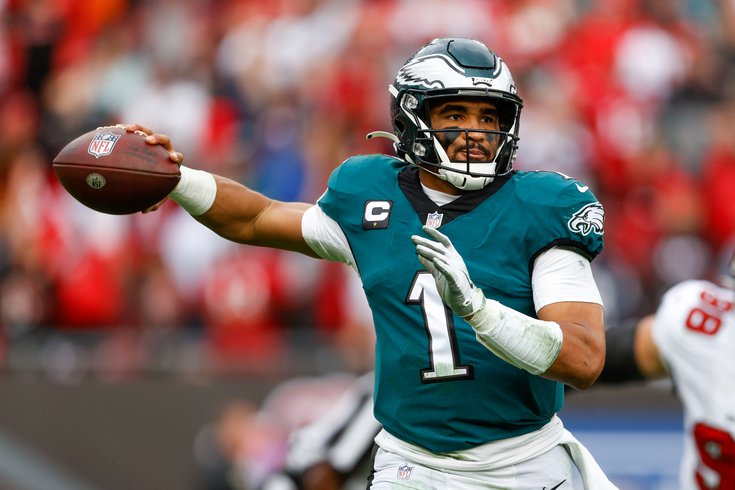 It started back in March at the NFL’s spring meetings. It was light on specifics, but Nick Sirianni revealed that Jalen Hurts had been working with personal tutors in Southern California, a sea change for the third-year player known for his prodigious work ethic.

Treading lightly was necessary by the Eagles’ head coach because anyone consuming some news today will quickly ascertain politics can be tricky.

And politics on the most local of levels like the workplace between generations with different views of the world can be as treacherous as it gets.

“I’ll let you guys do the digging to find out more about that."

So dig we did.

The dream-case scenario is not hard to envision.

In Hurts’ exit interview after the playoff loss in Tampa back in January, the Eagles’ offensive brain trust of Sirianni, offensive coordinator Shane Steichen, passing game coordinator Kevin Patullo, and quarterbacks coach Brian Johnson offered up constructive criticism that Hurts was receptive to, most notably the urgency to continue to improve on his lower-body mechanics which should result in better accuracy and more trust in the QB’s own mind when it comes to trusting what he sees.

The back and forth from there would lead to a query from Hurts on how to do that during the NFL’s downtime and a recommendation from his bosses that was accepted.

To understand all of that you have to grasp that personal coaches have never been more important for the development of NFL players because the most recent collective bargaining agreements have further limited offseason work under team auspices.

It’s just something modern coaches like Sirianni need to deal with and like anything in life, there are good teachers, bad teachers, and everything in between.

Back in 2019 when the now-defunct Alliance of American Football was paying lip service to being a developmental arm of the NFL, a setup the latter had absolutely no interest in, Eagles’ offensive line coach Jeff Stoutland was asked about handing off his then-star pupil Jordan Mailata to coaches that weren’t necessarily pre-approved.

The problem with that for players is you can’t be sedentary for large portions of the offseason if you hope to reach your ceiling as a player any longer, meaning NFL coaches have to trust certain members of what has become a cottage industry.

Some of the more highly-regarded tutors around the country include former Atlanta defensive end Chuck Smith, who has turned into a bit of a guru to pass-rushers, while Lane Johnson helped developed the “Offensive Line Masterminds” program in Texas with Duke Manyweather.

The so-called “Footwork King,” Rischad Whitfield, has helped many receivers, cornerbacks and running back sharpen up their games.

Hurts, of course, has typically spent a lot of downtime working with highly-regarded Atlanta-based QB mentor Quincy Avery, so the shift toward the left coast wasn’t just a dart throw. It was done with specificity in mind.

House spent eight years in the big leagues with three different teams in the 1970s. He developed his second career as a teacher of throwing mechanics while expanding his reach from the baseball diamond to the gridiron with many high-level quarterbacks coveting to work with him and his partners, Dedeaux, John Beck and Taylor Kelly.

The 3DQB method explains that "every delivery must be properly timed and kinematically sequenced as well as be mechanically sound to be efficient." The thesis further states that "In football, there are many variables that affect timing, sequencing and mechanics of the throw, but there are scientific certainties that the body must realize and achieve in order to throw both efficiently and accurately."

When asked specifically about House, Hurts gave a clandestine answer.

"I worked with a number of different people out there," he said.

Dedeaux is now the CEO of the company and the lead teacher for a lack of a better term. One former NFL scouting executive said he believed Hurts was likely working closely with the former Los Angles Dodgers hurler.

Dedeaux has already sharpened nearly half of the starting quarterbacks in the NFL so he has become the go-to guy in the league. Beck, meanwhile, is a former NFL quarterback who helps with QB development as well for 3DQB so that's where Hurts' answer comes from.

"I think Jalen’s trying to synchronize his feet to his vision so he can kickstart the mechanism as he progresses through reads and just tighten up his motion a bit," the exec explained.

Dedeaux may sound familiar to Eagles fans for his work with Carson Wentz before the QB's 2017 run to an MVP-level of play. Injuries and the pandemic limited Wentz's offseason work in the ensuing years. The alarm in failing mechanics without position coach John DeFilippo and continued work with Dedeaux was alarming and perhaps the co-star, along with injuries, to Wentz's well-discussed downfall in Philadelphia.

Sirianni has explained in the past that he evaluates quarterbacks in four major areas — accuracy, decision-making, movement skills and arm strength — with the first two categories carrying more weight.

Obviously Hurts checks the off-schedule box with his mobility and Sirianni has noted consistently that his second-year starter reaches the threshold when it comes to arm strength leaving improvement to the most important traits.

Hurts snapped off a quick “no” when asked if anyone was messing with his throwing motion because that wasn't the major issue to begin with, but just about every NFL QB can use help sharpening up the mechanics when it comes to the lower body.

Hurts understandably wanted to claim ownership of the plan when talking last week, both to shield his other tutors over the years and to make sure a narrative that he was ordered to shift his typical offseason program didn’t start to develop.

“From a training approach, my young career, I’ve always been trying to find out what my way of doing things is in the offseason,” the QB explained. “I’ve had opportunities to go back to Houston, I’ve been to Dallas, I’ve been to Florida, now had the opportunity to go out to California, so just the holistic approach of taking the next step as a quarterback.”

Hurts also emphasized all parts of his offseason development plan.

“Whether that be a function of the offense, running the offense, taking true command of the offense on the field, in the weight room, what am I eating, how I am watching film, creating a schedule for myself and just practicing great discipline in what I do,” he said. “I think holistically it’s all been helpful, no matter where I do it at or where I stayed or who I’m working with. I think it’s all been beneficial for me this offseason.”

The on-field shift is always going to get more headlines than nutrition or gym work, however.

“I think it was me just trying to find a way how to do it,” Hurts explained. “I think, what you have to understand is this whole thing is kind of still new in a sense of me finding my way of how I do something. The more time and experience you have at something, the better off you can make your way.

"I know coming out of my rookie year I did something totally different, then the next year I was trying to find out how to do things down in Texas. Now it’s just me venturing out to try to take it to a while other level.”

At Eagles rookie camp on Friday, however, Sirianni did admit the organization at least tried to tip the scales in a certain direction when it came to their most important player's development.

“I've had quarterbacks go out there that I've had nothing to do with it, and then quarterbacks go out there that I have,” the coach said. “In this case, Jalen and I work together and Brian and Shane work together to set this up because that was something that he was interested in doing and something that we were interested in doing.”

The fact that Hurts is open for business when it comes to suggestions to improve his game is not lost on the Eagles.