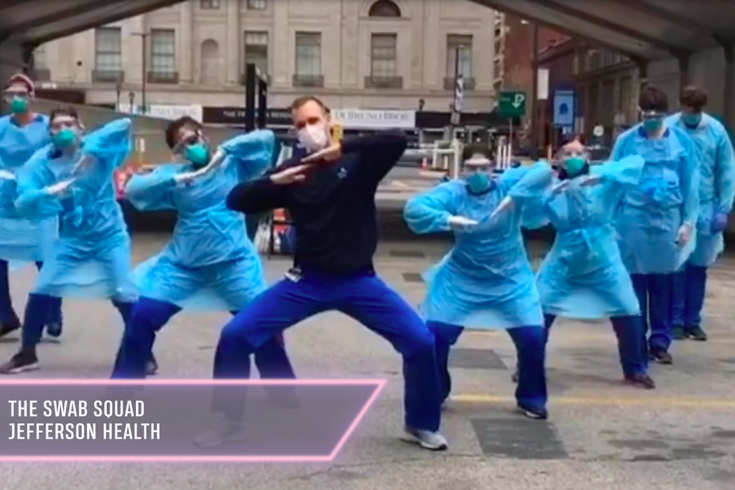 Thomas Jefferson University Hospital's dancing nurses, who became known as the Swab Squad, were honored at the MTV Music Video Awards for their viral dance video to Ciara's "Level Up."

The group, which is comprised of float and per diem nurses who worked Jefferson's drive-thru COVID-19 testing site in Center City, were recognized in the "Everyday Heroes: Frontline Medical Workers" category for their medical and musical contributions during the pandemic.

The Swab Squad first drew national attention after tackling the dance challenge to "Level Up." The video went viral after Ciara took notice to the nurses' moves and posted the video to her Instagram account. The group appeared on "The Ellen Show" soon after and even won a Webby Award.

Jeffrey Salvatore, the Swab Squad's team leader and the former site coordinator for the drive-thru testing site, said the hospital staff was excited about the MTV VMA honor on Sunday.

"I think that it's just great that it's keeping our morale going. We're back inside now and we're not really working together like we were before," Salvatore said. "It's a good way for us to keep the teamwork that we found while we were out there and apply it back to the hospital."

Seeing the Doctors and Nurses of @Tjuh_pool do the #LevelUp Dance brings me so much joy. Grateful for each and every one of you! You all are on a whole nother level for how you’re working so hard and sacrificing so much to take care of everyone! LevelUp Champs. #WereInThisTogether 💪🏽❤️

The group's Instagram remains active despite the drive-thru testing site shutting down. It's unclear how their social media presence will evolve over the coming months, though. "We haven't thought that far yet," Salvatore said. "We'd love to be able to put content out there to be helpful — whether it's for healthcare professionals or the public. We're discussing what direction we'd like to move forward with."

COVID-19 cases have decreased in recent weeks, even dropping to fewer than 100 cases per day in Philadelphia. The city reported 283 new cases of COVID-19 over the weekend, bringing Philadelphia's total to 33,778 since the start of the pandemic. There were no new deaths reported, and the death toll stands at 1,749.

Salvatore warns precautions still need to be taken to stop the spread of the coronavirus. "Flu season is right around the corner," he said. "The risk of COVID-19 and flu season on top of it at the same time could be a really disastrous situation." Both conditions are respiratory illnesses and are treated similarly in hospitals, potentially leading to a shortage of supplies and beds if the infection rates of both illnesses spike at the the same time.

"The threat is still there," he added. "We're urging the public like we've always been to do the same things, like wear a mask, social distance when you can, and practice good hand hygiene."