With his most dramatic win on Friday night, the Mount Airy resident, who works as a rideshare driver, has won more than $209,000 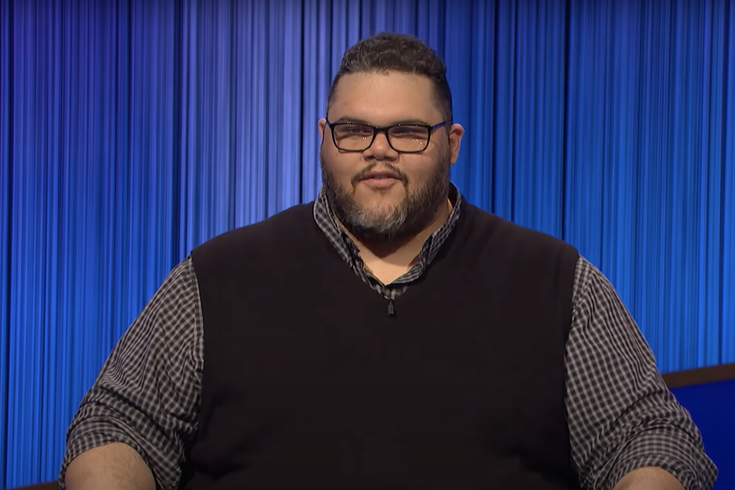 'Jeopardy!' champion Ryan Long, from Philadelphia, came from behind to win again on Friday, May 27, 2022, bringing his winning streak to 11 games. He had trailed headed into Final Jeopardy, but with the correct answer nearly doubled the money he won in the episode.

Squeezing the buzzer and answering trivia questions has been the easy part about being the reigning champ on "Jeopardy!" for Ryan Long – now for 11 straight shows after Friday's nail-biting win.

And that makes sense.

After all, his brain is a "storage locker of knowledge." That's how Long described his mind to gameshow host Mayim Bialik, who was clearly impressed following the Mount Airy resident's fifth consecutive victory last week. The win included Long giving the correct response of Lake Baikal to the Final Jeopardy clue, "It's referred to as 'the blue eye of Siberia.'"

"Everything that comes out here his floating around in here somewhere," Long explained, pointing to his head.

The harder part of being on "Jeopardy!" – the part that gets more difficult with each episode he wins – is being in the limelight, particularly when it comes to answering questions about himself.

Long was able to set aside his qualms about being on TV due to his love for "Jeopardy!" and a desire to make a name for himself.

"I'm at that age where you start thinking about what you've accomplished in life," he told PhillyVoice in an interview earlier this week.

Long, 39, previously worked for SEPTA, then in January 2021 he was hospitalized at Chestnut Hill Hospital for three weeks with a serious case of COVID-19. There was a time his doctors questioned whether he would survive, he has said. When he did recover, he found he no longer could handle the physical strain of his SEPTA job.

A long way from this guy to this guy... 🙌🏽 pic.twitter.com/MMg9NFYP8a

That's how he ended up as a rideshare driver for Uber and Lyft, making any money he could to support his 8-year-old-son Nathan. He admittedly has struggled with money since getting out of the hospital.

He needed help getting the cash together to buy his plane ticket to Los Angeles and headed west with just two button-down shirts and two sweater vests. This is part of the lore of his champion run and makes it easy to root for him.

Don't forget how Long won the first five games without wearing his glasses.

In case anybody’s wondering why I’m constantly squinting and adjusting during the game…it’s because my glasses are 3000 miles away, where they will do the most good. #jeopardy

Long's job makes him different from most of his "Jeopardy!" opponents. So does his educational background.

Most of the other contestants have college degrees, and many have advanced degrees, too. Long graduated from George Washington High School in the Northeast and attended a year of community college.

But Long is unflappable. He was confident his knowledge of movies and sports, two subjects that he said are often weaknesses for contestants, would give him a competitive edge when he applied to be on "Jeopardy!" more than a year ago. So far he's been correct in that assessment.

That last display of knowledge helped secure his fifth win and a spot in the show's Tournament of Champions.

Long's sports expertise set up the most dramatic win of his reign on Friday night. Headed into Final Jeopardy, Long had $13,000 and trailed Aaron Gulyas, a community college history professor from Michigan, with $14,800. The category was Sports & Entertainment, and Long bet big on himself, risking all but $1 of his pot. It paid off when he correctly answered Peyton Manning to the clue: In 2021, this Hall of Fame athlete launched Omaha Productions.

Through Thursday, Long had won $209,300, the 10th largest total among "Jeopardy!" winners this season.

That money will make a difference for him and his son, he said. He is planning to use some of his winnings to take Nathan on a fishing trip.

Long enjoys the peace and solitude of deep sea fishing, like his father did, he said, and his favorite fishing spot is at the shore in Belmar.

Long's mother is a Black woman who moved to West Philly from Georgia when she was 9, and his father is a Northeast Philly native of Irish descent. His Twitter handle, @blirish_charm, is a nod to those ethnicities.

Long's father worked several jobs, including a stint as a Philadelphia police officer, and instilled a love of learning and trivia. He would often pose challenging questions to Long.

"But then he wouldn't answer," Long said. "He would expect me to figure it out myself."

When Long was about 10-years-old, his father sent him to a Mennonite family's farm in Harleysville for weeks at a time in the summer. His dad met the family at Reading Terminal Market.

"I picked peas," Long said, an experience few, if any, of his peers in University City shared with him.

Also around that time, Long's father decided to move the family to Bensalem because "he was tired of finding crack vials on his doorstep," Long said.

The original plan had been move to Northeast Philly, but Long said his parents struggled to find a realtor willing to bring a mixed-race family into the predominantly white neighborhoods in the Northeast.

In Bucks County, Long was surprised to learn the suburbs weren't immune to crime. He remembers his bike was stolen not long after he moved in, something he had never dealt with in Philly.

Long's parents separated when he was 13 years old, and then Long's dad died when he was 17. He moved to his mom's house in Philly, and that's when he enrolled at George Washington High.

Although he was never a great student, Long loved to read. He was influenced by the works of ancient Greek author Homer and Jack Kerouac, the father of the beatnik movement and American counterculture.

Long grew up watching "Jeopardy!" In an episode this week, he said, as a child, he watched the gameshow with his mom and read the newspaper with his dad. Back then, his winning streak would have been capped at five nights, a policy Long wishes was still in place.

"It's just nice to get different people on," he said. "I like variety."

Currently, Long is tied for the fourth longest winning streak on "Jeopardy!" this season with Jonathan Fisher, of Coral Gables, Florida. Fisher has ended the run of Matt Amodio, whose tenure as champion began last season and lasted 38 episodes. Amy Schneider surpassed that mark later earlier this season with a 40-episode winning streak.