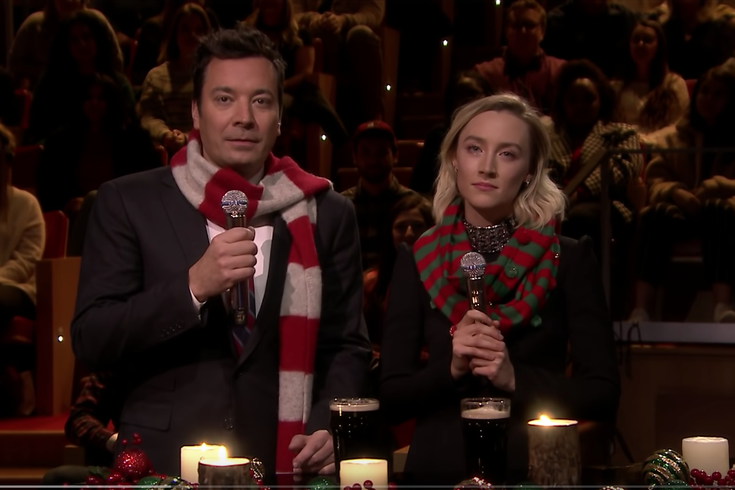 Fallon tests the Irish actress on her "Bridesmaids" knowledge and she nails every question the late night host throws at her. Her co-star, Margot Robbie, poses as a fan in a "fan video," asking Ronan to do her best Aussie accent, though the actress comments, "I feel like she knows I'm not really good with the Aussie accent."

Ronan also joined Fallon and guests Alessia Cara and Anderson.Paak to play a game of charades. The "Ladybird" actress paired with Fallon opposite of Paak and Cara. The two won the game, guessing "Baby Got Back" within two guesses, "Ant-Man" with three seconds left to spare, and ending in the ultimate duel by guessing "Drop It Like It's Hot" first.

“Just be cool. We’re winners,” Ronan said to Fallon as they entered their second round.

Though the real topper to the evening was when Ronan and Fallon embraced their Irish roots and sang "Fairytale of New York" by The Pogues. The scene was decorated with candles and dim lighting, as the pair wore red, white and green scarves, an imagining of being in an Irish bar on Christmas Eve. The candles sat on top of a piano as Fallon did a pretty darn good impression of Shane McGowan, and Ronan didn't do too shabby herself. Towards the end they took sips of their dark beer, presumably Guinness, and raised their glasses to the audience.