Quinta Brunson, Bryce Harper, Bradley Cooper and James Harden also were in attendance for the Birds' win against Minnesota 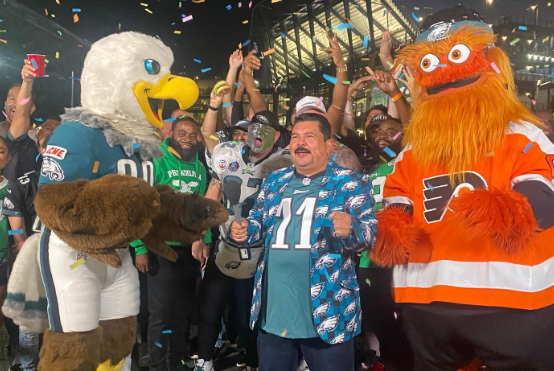 Before the Eagles home opener Monday night, Jimmy Kimmel's sidekick, Guillermo, of "Jimmy Kimmel Live!," hung out at the tailgate outside Lincoln Financial Field with some super fans as part of a nationwide tour promoting Kimmel's upcoming shows in Brooklyn. Other celebrities at the game included Quinta Brunson, Bradley Cooper, James Harden, and Bryce Harper.

The Eagles' victorious performance in their home opener on Monday night took place before a crowd dotted with famous faces.

One celebrity even joined the pre-game festivities. Guillermo Rodriguez, the security guard and sidekick on "Jimmy Kimmel Live!," hung out at the tailgate outside Lincoln Financial Field with some rowdy fans. Guillermo's visit was orchestrated as part of a nationwide bus tour promoting Kimmel's upcoming shows in Brooklyn, and Kimmel played clips from Guillermo's adventures during his late-night show.

Kimmel will broadcast a week's worth of episodes from the Brooklyn Academy of Music's Howard Gilman Opera House, starting Sept. 26. It's the sixth time "Jimmy Kimmel Live!" has visited New York and the first since the COVID-19 pandemic.

Beside Philly, the "Guillermobile" is making stops in Dallas, Chicago and Boston.

On the first stop of what Kimmel called a "circuitous route," to New York, Guillermo refueled with a meal at chef Marc Vetri's Fiorella on Sunday.

Guillermo described the meal as "fantastic," joking that he gained 10 pounds from the pasta he consumed.

He also took in some of Philadelphia's historic sites during his visit.

On Monday afternoon, he posted a "Bellfie" with the Liberty Bell.

For the main event, though, Guillermo took his bus to a Lincoln Financial Field parking lot to hang out with fans before the home opener.

To get the fun started, Guillermo joined the Eagles drumline to play some tunes.

During a segment on Monday night's "Jimmy Kimmel Live!," Guillermo, dressed in an AJ Brown jersey and festive Eagles sports jacket, introduced some of the fans he had befriended here.

One was Shaun Young, recognizable to Eagles fans for the face paint and shoulder pads he wears to games. Young said he's been doing his own makeup for 25 seasons. Kimmel then said hello to super fan Rob Dunphy, known for his Philly-themed chest ink. "I actually did this myself too," Dunphy joked of his tattoos.

Eagles cheerleaders and mascots Gritty and Swoop joined in on the fun, as well.

Guillermo referred to the mascots as his "weird new friends."

Throughout the segment, fans broke out in "E-A-G-L-E-S, Eagles!" cheers and "Dallas sucks" chants. Despite Guillermo's festive outfit and rapport with fans, Kimmel outed his sidekick as a big Dallas Cowboys fan, to which he replied, "Not today!" amidst a cascaded of boos.

Guillermo was one of a number famous faces in the star-studded home crowd for nationally broadcast game.

Bryce Harper, of the Phillies, and Sixers guard James Harden were rooting on the home team. Harden even received a game ball from Darius Slay after he made an interception.

Other local celebrities in the crowd to watch the decisive win included Questlove, Quinta Brunson, and Bradley Cooper (donning an Allen Iverson shirt).

Bradley Cooper wearing an Iverson shirt at the Eagles game.

He attended Georgetown while AI was there.

Brunson, the creator and star of "Abbott Elementary," was on Kimmel's show last week, where Kimmel apologized to her for his stunt while she was accepting the her Emmy award. Brunson had been given a personalized Eagles jersey before the game.

The Birds are winning it all (again). pic.twitter.com/FHsR1Wujp8