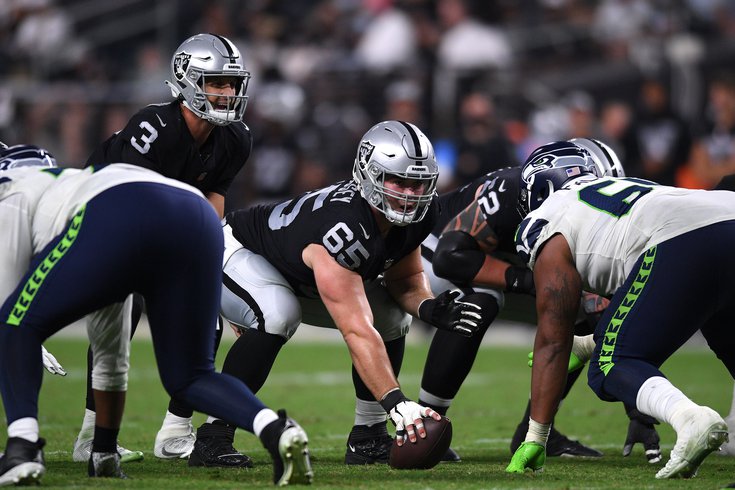 Jimmy Morrissey has created a new list. It’s much different from the one he made for himself on a January afternoon five years ago. This one comes with a little help from a current Eagle, and it’s far closer to being where Morrissey left off from the last one.

The 2016 La Salle College High School grad, who walked on at Pitt to eventually become a three-time all-ACC center, no longer hears the whispers of “too slow,” “too short,” “too small.”

Morrissey, the 6-foot-3, 305-pound center, who was selected 230th overall by the Raiders in the 2021 NFL Draft, had never been to Vegas prior to the Raiders’ OTAs back in May and June. He had to adjust to the suffocating Vegas heat and restarting his football odyssey. Everything is new again. He’s a five-year-old learning the game again, he’s a freshman at La Salle finding out about high school again, he’s walk-on at Pitt trying to make the traveling squad again.

And, once again, he finds himself at the bottom, working his way back up.

“My number one priority right now is to learn the playbook, get used to my new co-workers and be a good teammate,” Morrissey told PhillyVoice. “I want to make sure I make that leap, because I’m not an amateur anymore, I’m a professional. You learn fast that this is a business, but it’s a dream come true. [Raiders’ quarterback] Derek Carr addressed the team [during OTAs] and spoke to all of us about this being a blessing and not a burden.”

Morrissey said he’s been a human sponge when it comes to anything Cable says. The Raiders West Coast offense under Gruden is almost exactly what Morrissey ran under Pitt offensive coordinator Mark Whipple the last two seasons, so that comes as a big advantage in trying to make the Raiders.

The Raiders also run a center-centric system, where much is placed on the center to make the offensive line switches and calls. But something Morrissey pointed out in his short time with the Raiders is how much the system is reliant on Carr, who Morrissey refers to as “a mad scientist.”

“One thing people don’t know about the Raiders is how much of a genius Derek is, calling the offense and making changes,” Morrissey said. “He’s a mad scientist behind center. He knows every aspect of the offense. Derek will trump us if he sees something wrong. I actually have to give credit to all of the Raiders’ quarterbacks, because we’re fortunate to have really smart guys like Marcus [Mariota] and Nathan [Peterman] backing up Derek.

“They all know the offense and they make it a lot easier for the center, because they will see something we can’t see sometimes. But a lot is placed on center. Nick Martin and Andre James [the other Raider centers] have been really helpful to me. And I can’t say enough about [veteran offensive guard] Richie Incognito.

“He’d come up to me after practice and made sure I understood everything that went on during practice. Richie is probably one of the most-liked guys on the team.”

Morrissey made his list of goals, as he did before he walked on at Pitt. His one goal is to eventually be the starting center of the Raiders, and he knows that will take time and it’s a goal everyone who plays in the NFL should have.

But there is one overwhelming priority and that’s to win a Super Bowl.

"I don’t want to leave this game without having a ring on my finger, and that’s above everything else I set out to do,” Morrissey said. “Physically, I couldn’t be in better shape. I want to play above 300 and this is the best body composition I’ve been in in my life.”

Hall of Fame football writer Ray Didinger feels Morrissey has, barring injury, a long NFL career ahead of him.

“I really liked him in the draft,” Didinger said. “I thought he was under-drafted (in the seventh round). I would have liked the Eagles to have taken a look at him, but he is perfect for what (Raiders’ general manager Mike) Mayock likes and what they do. He’s a character kid who loves the game and works hard.

Morrissey is also a ‘Jason Kelce’ kind of player. The two lifted together for three weeks this summer in Egg Harbor.

“I hope I can have a career like Jason Kelce's,” said Morrissey, who wears No. 65 for the Raiders. “He plays center, my position, but he is light years ahead of me mentally and it was awesome talking to someone I admire that I watched growing up as a kid and someone I always looked up ever since I started playing center my freshman year of high school. Kelce is going to be an NFL coach one day, if he wants to, but he will have something to do with the game when he retires.

“He loves the game and he’s brilliant. Kelce is very relatable. I had a ton of questions for him. We spoke a lot about technique and scheme. One day during a lift Kelce broke down the block back on a shade in gap scheme. The lift probably could have taken us an hour. It took us two-and-a-half hours to finish that day. I’d still be talking to him if I didn’t have training camp.

“It was great to be with him and we pushed each other. Right now, I’m just hoping to make the Raiders. This team has a lot of talent, we have the coaching staff and the ability to win. The attitude is great here, and this group wants to win and can win. These guys love ball and it’s nice to be surrounded by guys that think like you do.

“We beat the [Kansas City] Chiefs last year and I think we lost to them by a close score at home.”

Morrissey comes from a huge family. They were Steelers’ fans.

“Yes, I’ve turned my family to the dark side,” said Morrissey, laughing. “I feel like I owe a lot to the Raiders for picking me. My dream is to one day be the starting center for the Raiders, but if none of that happens, it won’t come from a lack of effort.”