Trevor Noah: Joe Biden peaked too early, 'It's like getting wasted at 6 p.m.'

'By the time the party’s really going, you’re puking in the bushes,' the 'Daily Show' host joked on Wednesday night's episode 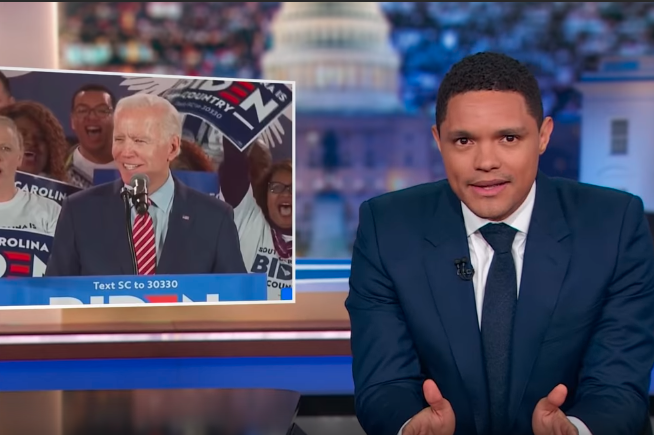 The Daily Show with Trevor Noah/YouTube

On Wednesday night, 'Daily Show' host Trevor Noah tackled Joe Biden's loss in the New Hampshire primary. Biden trails the furthest behind with only six delegates. He needs to win in South Carolina in order to stay in the running to be the Democratic presidential nominee.

While Tuesday's primary ended well for winner Sen. Bernie Sanders and runner-up Pete Buttigeig, the biggest surprise of the evening was Sen. Amy Klobuchar's third place finish. The senator's popularity soared overnight — and right when it mattered most, Noah notes.

"See, the other candidates (Biden and Warren), they had their surge last year, which is too early," Noah said . "It's like getting wasted at 6 p.m. By the time the party's really going, you're puking in the bushes."

After the New Hampshire primary and Iowa caucuses, Buttigieg leads the Democratic presidential hopefuls with 22 delegates and Sanders is just one behind with 21. Warren and Klobuchar come in third and fourth, respectively, with eight and seven delegates. Biden trails the pack with six delegates.

Noah called out Biden for leaving New Hampshire before the polls had even closed. "I mean, I've heard of fans leaving the game early," the comedian said, "but you know it's bad when the team leaves early to beat the traffic."

Instead, Biden had headed to South Carolina in hopes of rallying supporters there. South Carolina's black voters account for about 60% of the Democratic electorate — something the Biden campaign hopes will give him an advantage in that primary. However, a Quinnipiac University poll this week showed Biden's support among black voters had dipped to 27%.

"It is a little weird, you have to admit, that the story of the Democratic race has now been written by two states that aren't representative of the Democratic party," Noah notes of Iowa and New Hampshire. "Think about it: Two overwhelmingly white states shape who the Democratic nominee will be. And that's long before minority voters have had their say."

Watch the full segment below.