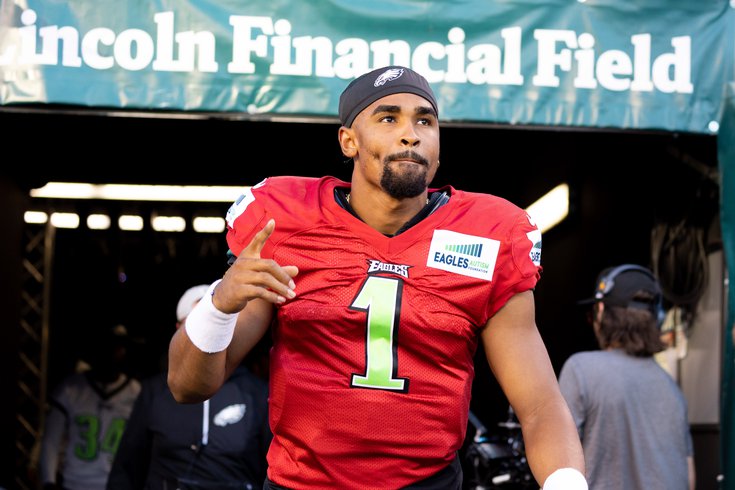 QB Jalen Hurts walks out from the tunnel during the Eagles' open practice at Lincoln Financial Field back on August 7.

You probably understand the expectations for the 2022 Philadelphia Eagles by now, yet so many have crossed off the man in charge of the on-field product when it comes to living up to them.

The aggressiveness of defensive coordinator Jonathan Gannon has been debated endlessly, as has the ceiling of quarterback Jalen Hurts. When it comes to Philadelphia living up to the ramped-up forecasts, those two subjects lead the field by a wide margin with ancillary issues like the depth at certain positions and special teams acumen also thrown in the hopper. Few critics have voiced concerns over second-year head coach Nick Sirianni other than the obvious hurdles any young mentor has to fight through, however.

When it comes to coaches, all circumstances are different and Sirianni has some unique hurdles to navigate, beginning with Hurts.

As a young coach, Sirianni remains in a traditional NFL setup in that GM Howie Roseman is in charge of the offseason before he hands the reins to Sirianni starting Sept. 11 in Detroit.

"Howie SZN" has been a near-unanimous success with talent additions like A.J. Brown, Jordan Davis, and James Bradberry headlining capped off by the late trade for Chauncey Gardner-Johnson that supposedly patched up the last obvious hole on the roster at safety. From two through 53, the Eagles have one of the most impressive rosters in the NFL.

No. 1 — both literally and figuratively — will determine the ceiling for the team, which seems to range from NFC East contender on the low end to legitimate Super Bowl aspirations if Hurts can carry his own water.

While it's cliche to boil everything down to quarterback vs. quarterback, it's not incorrect to point out that having a superstar signal caller increases the margin of error for any team.

The best recent example of that was the 2020 playoff game between Kansas City and Houston where the Chiefs not only erased a 24-0 deficit they routed the Texans 51-31. You can rest assured that the 30 other teams not involved would have been cooked at 24-0 and the Texans themselves had a "superstar" that day in Deshaun Watson and could not do anything to stem the tide with what was a seemingly insurmountable lead.

So why dream the impossible dream of unrealistic standards?

The Eagles, like a lot of other NFL teams, incorrectly used the divisional round playoff slugfest between Kansas City and Buffalo back in January as a faulty measuring stick, reaching the conclusion that they simply didn't have the firepower to keep up with a Mahomes or Josh Allen. That's why the feelers were put out to Russell Wilson and Watson in the offseason.

There's an obvious sliding scale there, though, in that the Mahomes-Allen battle on one Saturday in January is not the consistent standard. Former Eagles DC Jim Schwartz used to note all games have personalities and as dynamic as quarterbacks like Mahomes and Allen can be, you can look at their own weekly resumes to validate the thesis that those kinds of fireworks aren't exactly a guarantee each and every week.

The Eagles and the rest of the NFL need to get a better hold on what having a "star QB" really means which is increasing that margin for error each week.

No signal-caller has done that better than Aaron Rodgers over the years and the Green Bay fan base goes into every game — favorite or not — haughtily thinking (usually correctly) that the Packers are going to win that week. Intermixed with Rodgers' 10 Pro Bowls, five All-Pro nods, and four MVPs, though, is "only one" Lombardi Trophy.

In Hurts' first full season as the Eagles' starter, the team overachieved because the young QB was far better than expected. Rebuilding under a rookie head coach turned into 9-8 and a playoff berth with Pro Bowl alternate status for Hurts.

The context to that is vast, some real and some not. It's fair to say the Eagles had an easy schedule and couldn't beat teams that had true star quarterbacks last season. That said, it also should be stipulated that Hurts proved to be a legitimate starting QB in this league, something some critics believed would never happen.

Building in that is the prudent plan for Philadelphia.

The offseason was about shopping for the upgrade. Now, it's Sirianni's job to maximize what he has. And when expectations are this high, that doesn't mean wasting five or six weeks with crossed fingers hoping Hurts has magically turned into something he's not. Sure you want to see improvements in accuracy and decision-making but this should be about allowing the star players to be difference-makers while the coaching staff finds ways to utilize what Hurts does best.

It's not an insult to suggest that the Eagles aren't equipped to win in the playoffs if they fall behind 24-0 or to admit that they can't keep up with Mahomes or Allen on a hot-shooting night.

Jeffrey Lurie may correctly covet a high-octane passing game but he doesn't have Justin Herbert or Joe Burrow, never mind Mahomes or Allen to win a historic offensive explosion right now and the coach shouldn't pretend otherwise because of what the Eagles are paying Brown moving forward or because Dallas Goedert is a top-5 tight end, and DeVonta Smith projects as a top-tier WR2.

What the Eagles and Sirianni can do is increase their own specific margin for error by again using an RPO-heavy mindset where a plus-one in the running game makes defensive decisions difficult for the opposition.

The first step to being really good in professional sports is being honest with yourself. The surest road toward failure is trying to be something you are not.