Tyrone Johnson: The clock should (already) be ticking on Jonathan Gannon 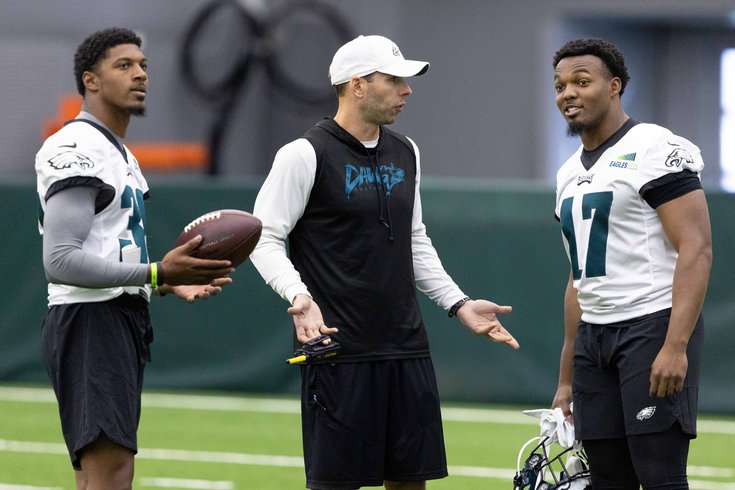 'I don't know what fancy defense you ran at Georgia, Nakobe, but here in Philly we don't line up within 20 yards of the line of scrimmage.'

I really want second year defensive coordinator Johnathan Gannon to succeed, but I, like most local fans, am worried.

The Eagles made a lot of talent upgrades on defense, but Sunday against the Lions, Gannon's defense looked exactly the same. I know it was only Week 1, but it was Week 1 for everyone and giving up 35 points to the Lions is plain unacceptable.

Upgrades at DT, LB, CB, and Safety plus a returning Brandon Graham still led to a total of just six QB hits and the Lions closing a 17-point 2nd half deficit down to three.

Before Gannon was hired, he was touted by many as the brightest untapped defensive mind in the NFL and a sure future head coach. In fact, there were people who thought he would be one and done. Despite the Eagles defense being mediocre at best last year, he did get three unearned head coaching interviews before the Texans hired Lovie Smith and an interview with the Vikings, the Eagles opponent Monday night. Why? We know how hard it is to coach in the NFL and the hoops many must jump through to get hired (see Duce Staley). Yet Gannon was close to be hired based on word of mouth and not based on measurable coaching ability.

Last year the Eagles were 9-8 and overachieved overall, but looking below the surface doesn't only apply when talking about Jalen Hurts. Any numbers that look positive for the Eagles defense last year, must be balanced with context. The Eagles defense, led by Gannon beat these quarterbacks last year:

Then 36-year-old Matt Ryan is the best QB Gannon's defense has beaten so far in his career. Jared Goff didn't put up gaudy numbers, but we all saw how comfortable he was in the pocket in the 2nd half Sunday. We also all saw what Tom Brady did in the playoffs.

Hopefully, Gannon can really coach, hopefully he is still a star in the making, but when do Eagles fans get to see it? When will the guy who was a can't miss coach 15 months ago, show that he's a good one?

The next test at quarterback is Kirk Cousins who isn't a star, but he has had success against the Eagles in the past and won't be intimidated by the Eagles crowd on Monday night. He is 6-3 all time against the Birds and has thrown for over 300 yards five times with 21 touchdowns and six interceptions.

Justin Jefferson (why Howie, why?) had 184 yards and two touchdowns Week 1 against the Packers. It is important that things finally look different.

Last week felt like Week 18 of the same old Gannon, instead of a fresh start. It is unfair to Jalen Hurts (who balled out Sunday) and the offense, and it is unfair to the defensive talent that has yet to be utilized correctly.

We all want him to succeed because we root for the team, but anyone that suggests things will be better this week are being more hopeful than logical. I don't think all those smart football people who were/are high on Gannon were wrong. Maybe it will just take more time, but the clock should be ticking on him.