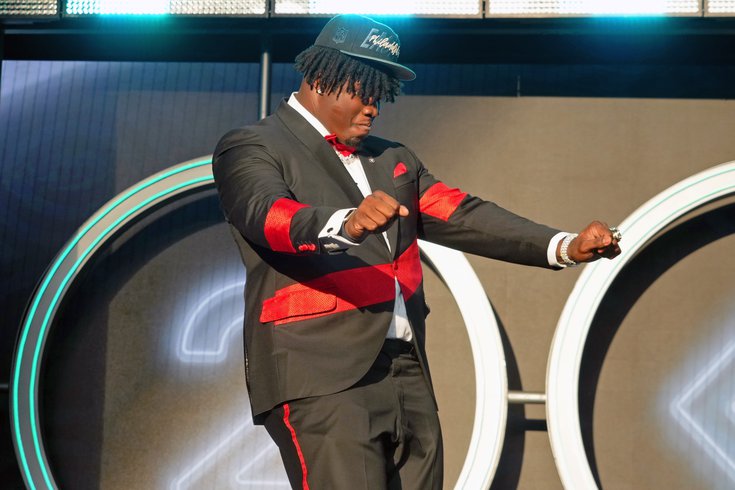 Jordan Davis after hearing his name called in the first round of the 2022 NFL Draft.

Shon Galloway’s eyes would invariably narrow. He would peer down at his sign-in sheet, and someone always seemed to be missing. Jordan Davis tried making himself invisible, slipping into the shadows and sliding unseen through the Mallard Creek High School boy’s bathroom door. It never worked. Even then, as a 15-year-old high school sophomore, Davis was too big to miss. Adding to his clandestine quest was the problem of the bathroom being about 70 yards down from where the Mallard Creek weight room was.

Davis would sit in the cramped bathroom stall thinking no one would find him.

“I was the strength coach and defensive line coach then at Mallard and I would see Jordan always trying to duck in the bathroom and sit in the stall,” recently recalled Galloway, laughing. “I could see clearly Jordan going into the bathroom. He would cry he didn’t want to lift. I would stand in the hallway, and I don’t know why Jordan kept going into the same bathroom, so I would go get him. I’m banging on the stall, yelling at him, ‘Get out of there Jordan, come on let’s go!’ It’s nice to see Jordan come from that, a caring, great young man, and ferocious on the field, evolve from someone who really didn’t want to play football to what he is today.”

Davis, today, is the Eagles’ first-round draft pick, selected 13th overall after spearheading the Georgia defense to its first national championship since 1980.

Despite being constantly double- and sometimes triple-teamed, the larger-than-listed 6-foot-6, 341-pound Davis was a disruptive force in the middle of the Georgia defense, recording 32 tackles, 5.5 tackles for loss, 2 sacks and 9 quarterback hurries in 2021. An AP and Coaches’ All-SEC first-team choice along with All-American recognition, Davis passed on the NFL Draft to return to lead the Bulldogs’ defense during their historic championship season.

Davis was considered one of the best run defenders in the SEC. He was named an All-American in 2020 and had an even bigger season in 2021. He dazzled at the NFL Combine, when he ran an incredible 4.78-seconds in the 40-yard dash weighing 341 pounds.

It’s been an interesting odyssey in such a short period of time, because Davis did not seem to be going anywhere until his senior year at Mallard Creek High School, in Charlotte, North Carolina. He would show flashes here and there, but he had no further vision of where football could take him.

Everyone around him, however, did.

That started with his mother, Shay Allen, who grew a little tired of her son loafing around on the couch playing video games all day. Davis had played basketball at Hopewell High School, before Allen took him and transferred him into Mallard Creek, a 4AA North Carolina state powerhouse, where he was introduced to head football coach Mike Palmieri and defensive line coach Galloway.

Davis was always large for his age. As for being motivated, that’s another story. He’s described by many who know him as an overgrown teddy bear, with a jovial disposition. He’s basically a larger version of the late Jerome Brown, an oversized guy with a room-capturing personality to match.

But Davis did not really come into his own until his senior year at Mallard Creek.

“I don't know. I just kind of picked (football) up, tried it, liked it,” Davis said. “It was a challenge. It was one of those sports where I had to learn my way up. First starting out, I was on JV, and now playing for the Philadelphia Eagles. So, it's a crazy experience. Journey of a lifetime. Took a long time in the making. A lot of dedication.

“When I first started playing football in high school, my main mission was to get to college. When I got to college, my main mission was to get to the NFL and graduate. When the NFL comes knocking, have a great career at Georgia, and I just wanted to take advantage of this opportunity I had at hand. It kind of just clicked. I hit school; I was like I can do this as a career. I could do what I love every day as a career. They say if you do what you love, then you never work a day in your life. That's when it clicked.”

“We had to show him how to put pads on,” remembered Galloway, now the head coach at Garinger High School in Charlotte. “It took a whole lot of pulling and pulling, and I saw a whole lot of change in Jordan his senior year. Coach Palmieri put Jordan in on the defensive line in the North Mecklenburg game. We put him in the middle and Jordan clogged everything up. No one knew where the kid came from. The next game we put Jordan in against Hough, and he ended up sacking the quarterback two or three times, had a couple of tackles for losses and picked up a fumble and ran it back 30 yards for a touchdown.

“Jordan’s personality started to come out and he began building confidence. He was having fun and you can see it. He had a sack against Hough and began doing a dance, and you see how happy Jordan was. But Jordan did not start until his senior year, because he had so much talent in front of him. But he played on the JV. He played a total of 20 plays the whole season as a junior. At that time, Jordan may have still been on the border of whether he wanted to play football.

“Jordan is a big, nice kid. He wouldn’t say anything to you, though I remember Jordan in his sophomore year seeing the potential he had. We had a kid named T.J. Moore, who was a 6-5, 300-pound guard who went to Florida. Moore was a year older, and in his junior year, we ran a goal line drill where Jordan was the nose guard. They snapped the ball and before T.J. could get out of his stance, Jordan swam him so fast and hit the running back in the backfield. I was like, ‘Oh my gosh, we have something here.’ That’s when you saw he had it.”

As Davis got older, Galloway would joke with him that he made one play the summer of his sophomore year and didn’t make another until he was a senior.

Palmieri laughed at how difficult it was early on in getting Davis into the weight room. He remembers Davis more as a basketball player, who had no background in football. Compounding Davis’ inexperience was a talent-laden Mallard Creek program that produced Arizona Cardinals tackle D. J. Humphries and Cincinnati Bengals’ tight end Thaddeus Moss. Just think of Mallard as the St. Joe’s Prep of North Carolina.

“When Jordan came to us, we had one of the best programs in the country at the time, and Jordan was really raw,” said Palmieri, who’s now the head coach of Denmark High School, in Alpharetta, Georgia. “I remember meeting his mom and I couldn’t believe his age. No one knew about Jordan. He was a quiet kid, and his mother wanted him to play. We worked him in slow, got him in the weight room and brought him along.

“When he began buying in, he really took off. His mother was the driving force behind him. She trusted us with her child. It was a blessing. When Jordan came, we were turning over 13, 14 kids to D-I colleges. Jordan’s senior year is when he took off. As a senior, he was an every-down player, but I think it’s funny the same criticisms that he’s facing now about conditioning, his stamina, his weight, he faced the same coming out of Mallard.

“Don’t ever doubt Jordan Davis. Jordan has a personality to deal with things when times get tough. He’s even keeled and that helps him. Jordan can be a pass rusher. They couldn’t block him in high school, they couldn’t block him one-on-one in college, and they’ll have problems blocking him in the NFL. Jordan is the type of kid that if you doubt him, he’s really going to turn it up on you. When he went to Georgia, it was the same thing. I saw him chasing people down from behind at Georgia. Jordan will fit in nice with the Eagles.”

Palmieri was on the rooftop of a local corner bar on Thursday night for the first round of the draft. Galloway was sitting on his living room sofa. They were hundreds of miles apart, though they had the same reaction when NFL Commissioner Roger Goodell called Davis’ name with the 13th overall pick. It came with a smile and a knowing nod.