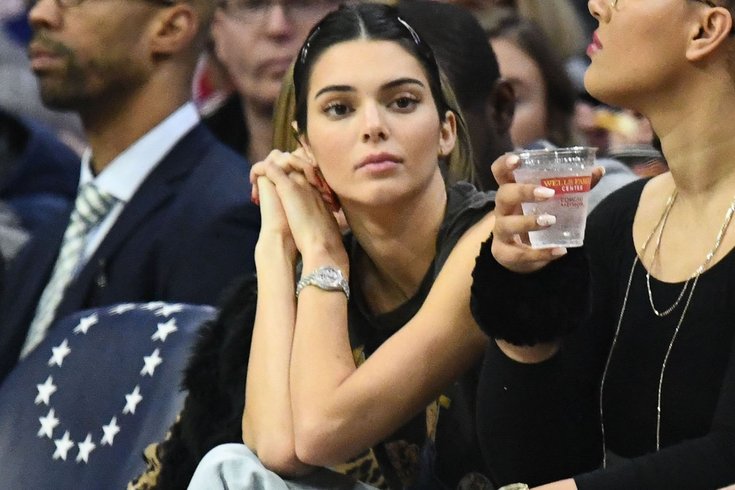 Kendall Jenner, pictured here at a Sixers game during the 2018-19 NBA season, once dated Ben Simmons. They reportedly broke up. Then social media happened. What does it all mean?

A couple of months have passed since model Kendall Jenner and Sixers star Ben Simmons broke off their year-long relationship.

While the two have been said to remain friends after an amicable split, there's word that Jenner has been getting close with Los Angeles Lakers forward Kyle Kuzma.

A report from E! News says Jenner and Simmons crossed paths on the Fourth of July at the Booty Bellows party at Nobu in Malibu. The two reportedly had a "short run-in" but didn't talk to one another.

Earlier in the day, Jenner was reportedly spotted watching dolphins with Kuzma on a luxurious yacht.

Simmons and Jenner are thought to have split up due to their busy schedules and primary residence on opposite sides of the country.

Jenner's connection to Kuzma hasn't been defined, but a message Jenner shared on Instagram was suggestive of a romance.

"4th of July is arguably my top two favorite holidays... I don't know why I love it so much," Jenner wrote. "It's the fireworks and the vibe. I just feel like you should be in love on 4th of July."

If you strain just hard enough, you can connect the real dots. The Philadelphia 76ers are named after the year in which the Declaration of Independence was signed in Philadelphia (not after the Schuylkill Expressway).  That is where Ben Simmons, Kendall Jenner's ex-boyfriend, plays basketball.

In other words, every day is like the Fourth of July with Ben Simmons. She's speaking in code, guys. Obviously, this means they're getting back together, just like that Jenner Instagram post Simmons liked.

The Lakers and Sixers have the third- and fourth-highest odds of reaching the NBA Finals in 2019, respectively. Nothing would be more satisfying than a Simmons-Kuzma-Jenner showdown in Los Angeles next June.