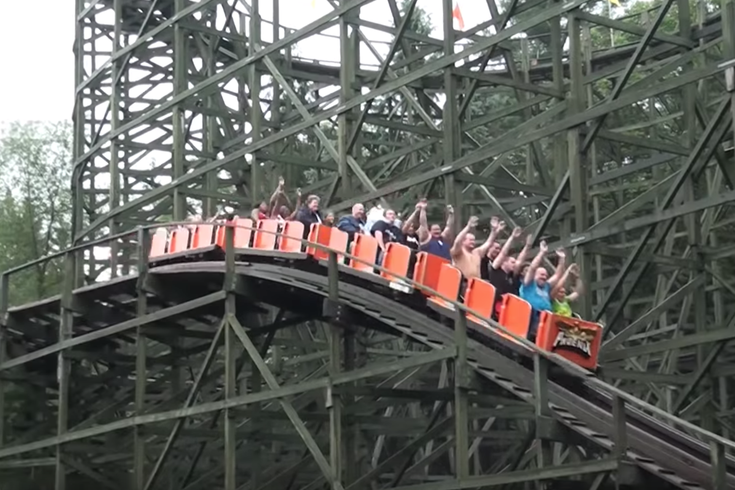 Knoebels' roller coaster the Phoenix, a Knoebels staple since 1985, finished as the No. 2 roller coaster in the country in USA Today's 10Best readers' choice poll.

Knoebels Amusement Resort is one of Pennsylvania's best-kept secrets from the rest of the country, a family-owned amusement park, campground, and place for an all-around good time in Northumberland County.

According to a new poll from USA Today, it also sports the second-best roller coaster in the United States.

Knoebels' beloved ride the Phoenix, a wooden roller coaster that dates back to the 1940s and has been a Knoebels staple since 1985, finished as the No. 2 best roller coaster in the country according to USA Today's 10Best readers' choice poll. The only coaster riders enjoy more is the Steel Vengeance at Cedar Point in Ohio.

The Phoenix is regularly ranked as one of the best wooden coasters in the country, winning Amusement Today's Best Wood Roller Coaster award in 2018 after two years at No. 2.

Here's what USA Today's poll had to say about the Phoenix:

"The Phoenix, a classic wooden roller coaster inside Knoebels, proves that newer, taller and faster aren't always better. Consistently ranked as one of the best wooden coasters in the country, Phoenix offers panoramic views of the surrounding hills, as well as thrills in the form of a double out and back layout and speeds of 45 miles per hour."

That's a pretty good take. Personally, wooden roller coasters are almost always the more enjoyable experience. Steel rides obviously get points for faster speeds and loops, but wooden roller coasters just feel right. They don't try to overwhelm you with big show-stoppers; instead, they're about the whole ride.

Here's a first-person look of the Phoenix, if you're interested in why it's so popular:

Elsewhere in the poll, New Jersey's Six Flags Great Adventure felt some love: The wooden coaster, El Toro, ranked No. 5, getting appreciation for "its powerful and shaky train."

El Toro is one of the tallest and fastest wooden coasters in the world, according to USA Today, and is relatively new to the coaster world: It opened back in 2006.