The former SNL cast member hosted the sketch comedy show for a fourth time this week and reprised some of her most iconic characters. 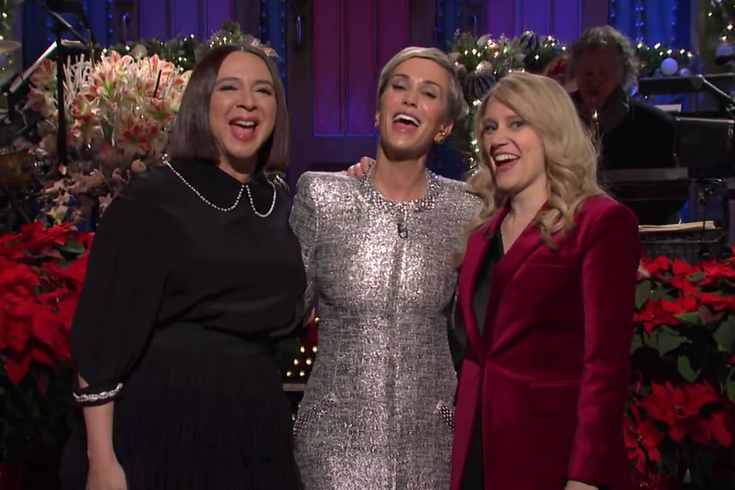 Kristen Wiig got some help from Maya Rudolph and Kate McKinnon during her opening monologue on 'Saturday Night Live' this week.

Former "Saturday Night Live" star Kristen Wiig returned this week to host the sketch comedy show's Christmas episode, where she reprised some of her most iconic characters from her seven-year run on SNL.

"It is so great to be here hosting Saturday Night Live. I consider this home, and it is so nice to be home for the holidays," Wiig said in her opening monologue.

The Lancaster, Pennsylvania native starred on SNL from 2005-2012. Since then, she's hosted the show four times — including twice just in 2020.

These are definitely the words to this song. pic.twitter.com/oaqMGSGf0C

Some of Wiig's former characters that she reprised on SNL's final episode of 2020 included Mindy Grayson and Sue.

Wiig also participated in a sketch that mocked "Home Alone 2: Lost in New York," where the 47-year-old Wiig played the role of the Pigeon Lady.

Meanwhile, the aforementioned Rudolph returned as Vice President-elect Kamala Harris, while cast member Alex Moffat starred as President-elect Joe Biden. It was announced earlier this week that comedian Jim Carrey would not be returning to impersonate Biden on SNL.

"How did you even get into The White House?"


Get in here, Joe. pic.twitter.com/U9EScBho5V

Dua Lipa was the show's musical guest this week. Full episodes can be watched on SNL's YouTube channel and on Peacock, NBCUniversal's streaming service.