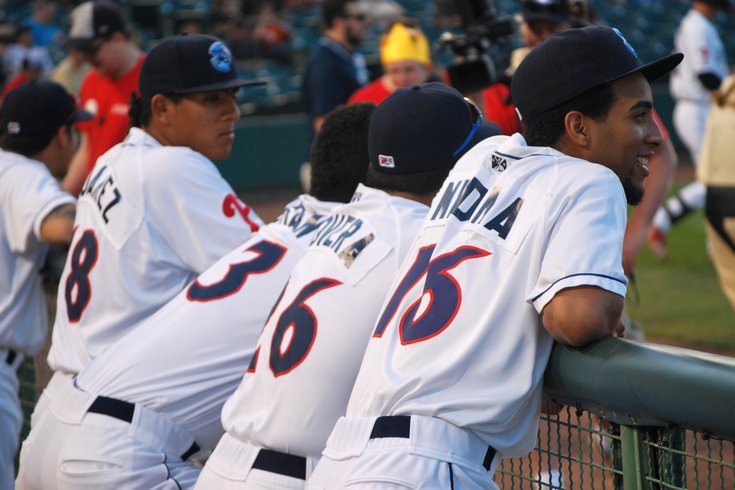 Thanks to a talented rotation of prospects off to a sizzling start, Low-A Lakewood's pitching staff had a 2.70 ERA in April.

LAKEWOOD, N.J. – It all started, at least according to Low-A Lakewood pitching coach Brian Sweeney, about two weeks ago in Charleston, W.Va., when two of his talented kids took the power out of the West Virginia Power.

And not just the power, really. But the ability to get on base, to create any kind of rallies, and the inability to avoid walking back to the dugout at Appalachian Power Park with anything other than an underused bat ready for a rest on a bat rack of sadness.

On April 20, rising Phillies left-handed prospect (and current Lakewood BlueClaws’ pitcher) Ranger Suarez struck out 10 of the 26 batters he faced and walked just one in seven shutout innings en route to a 2-1 win. The next day, right-hander Adonis Medina (whose fastball tops out in the upper 90s) nearly copied Suarez’s pitching line, number for number, in innings, strikeouts, and walks, while allowing one fewer hit, in a 1-0 victory over the West Virginia Power, the Pittsburgh Pirates Low-A team in the South Atlantic League.

“The competition is fantastic to see and it’s contagious,” Sweeney said Friday afternoon at FirstEnergy Park. “We want to be consistent throughout the year, and right now, we’re in a good stretch.”

A good stretch with dominant pitching, almost nightly, really. And perhaps what’s going on in Lakewood is all the more impressive when you consider we waited until the fifth paragraph of this story to remind you that 18-year-old wonder-kid Sixto Sanchez also pitchers in the BlueClaws formidable rotation.

Sanchez, whose 6-foot, 185-pound frame and upper 90s fastball bring to mind fellow Dominicans Carlos Martinez, the late Yordano Ventura, and Hall of Fame Pedro Martinez, burst onto the radar last summer with a 0.50 ERA and a 44-to-8 strikeout-to-walk ratio in 11 starts in the Gulf Coast League. Sanchez is 2 1/2 younger than Mickey Moniak, whom he played with both in the GCL and currently with Lakewood.

“Every time Sixto pitched,” Moniak recalled of last summer, “it was game over. We weren’t going to lose that game. No chance. It’s 99 (miles per hour) and he hits his spots.”

Despite a record just hovering over .500, you almost get the feeling the Lakewood BlueClaws (13-12) take the field with that mentality every day in 2017. Because it’s not just Sanchez, not just Suarez, and not just Medina.

It’s basically every pitcher who has made at least four starts for the team in the season’s first three-plus weeks. Feast your eyes on these stingy numbers:

Notable: among that group, Suarez, at 21-years-old, is the elder statesman of the rotation.

“I just don’t think that we could have scripted April to go any better than it did for a lot of these guys,” said Phillies player development director Joe Jordan. “They are young and a lot of them had good summers last summer, whether it was the Gulf Coast League or Williamsport. I don’t think we could have asked for them to do any more than they have done. Just take your pick, there’s a lot of good things to talk about.”

Jordan decided to pick one area: their strikeout and walk numbers.

“We’re not walking guys, right at a strikeout-an-inning, and 3 per 9 (innings ratio in walks) – that’s pretty good for Low-A when you’re looking at walks,” Jordan said of the entire Lakewood staff.

Look at those numbers four or five paragraphs up again. That’s right, as the BlueClaws enter the month of May, Sanchez has the highest ERA (and lowest WHIP) among that quintet.

“So far, so good for the first month,” Sanchez said through Lakewood hitting coach and generous translator Nelson Prada. “We wish each other well, but if he goes five (innings), I want to go six and try to beat him. But it’s not a competition in a bad way, it’s all good.”

“It’s tough to go out there and throw 97 and strike out 10 like some of them do,” said Fanti, a 6-2 left-hander who joined the Phillies as a 31st-round pick two years ago. “I know I don’t have that in me, but, it’s definitely good to see them doing well, especially for the team. It’s nice because they’re giving our hitters a chance to win games. We’re doing our job.”

Sixto Sanchez hitting 99 in the first with a 91 changeup off the deck.

It’s worth mentioning here that what’s going on here in Lakewood isn’t exactly the same thing as the “Baby Aces” in Clearwater six years ago (the Jarred Cosart, Trevor May, and Co. group dubbed by former Philadelphia Daily News columnist Paul Hagen) or the David Coggin-led “Young Guns” from 1997, or even the more recent Double-A rotation from a couple of years ago.

The Phillies pitching talent in the lower levels of their minor league system (below Double-A Reading) starts in the Gulf Coast League and extends to Class A Clearwater, too. Group the above five arms with 2016 second-round pick Kevin Gowdy (currently in extended spring training, with a likely ticket to short-season Williamsport), and Class A Clearwater pitchers Franklyn Kilome, Seranthony Dominguez, Cole Irvin, and Alberto Tirado, and you’ve got not just one great rotation at one stop, but a collection of 10 talented arms to get excited about.

“No, I think we’re probably ahead of the industry right now,” Jordan said when asked if he’s ever seen quite a collection of pitchers below Double-A within an organization. “Hopefully we can keep them healthy and they can keep getting their work in and keep getting better. … I just like the fact that there are a lot of good, big fastballs, guys that have good weapons and they’re throwing the ball over the plate. I mean, that’s the ticket. That’s the key.”

As with the lessons learned from those other aforementioned rotation groups in the Phillies farm system in the past, it’s probably best to move forward with cautiously optimistic expectations. The attrition rate will only get higher with each level any prospect graduates to throughout their development and pitchers, in general, are risky bets.

Still, the sheer number of arms is a very good thing as the Phillies continue their multi-year rebuild. The more you have, the better chance that a few will pan out in the big leagues one day.

General manager Matt Klentak talked about the importance of fueling the rebuild with “waves of pitching” when he first came on board 18 months ago. What’s going on in Lakewood is a testament to that organizational philosophy.

First-year Lakewood manager Marty Malloy, who was a bench player for the Florida Marlins 15 years ago, was asked if there were any similarities watching his current Low-A rotation and that young and talented major league one from 2002.

“I would like to say that’s going to happen in the big leagues with this group of kids, but as far as the electricity, it’s similar,” Malloy said. “It was (A.J.) Burnett, it was (Josh) Beckett, it was (Brad) Penny. Ryan Dempster might not have had the electric stuff that the other three did, but he was the veteran of the group and knew how to pitch.

“This group is going to be fun to watch, and it’s not just going to be this year. Hopefully, they stay healthy, and that’s with any of these guys. It’s a treat for me to know every day you’ve got a guy on the mound that can give you what they’ve been giving.”