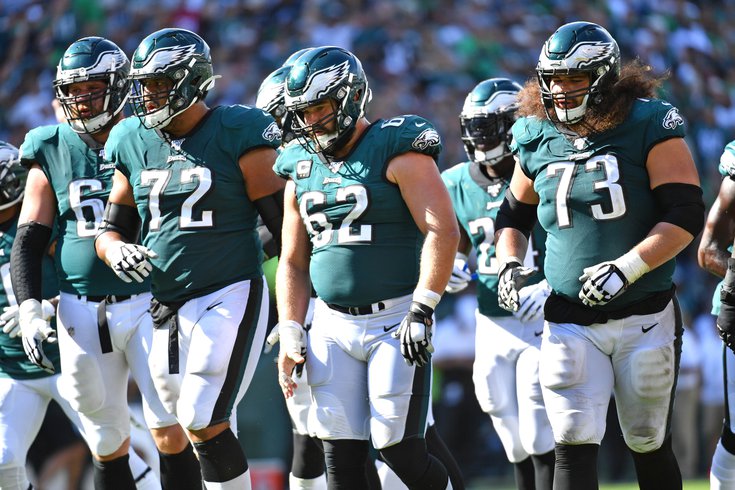 Fashion and sports collide in a phenomenon known widely on social media as the "game day fit," which is when players show off their personal style for the cameras through pregame outfits worn before changing into uniform.

Some wear the trendiest designers, while others pay homage to players that came before them. On Sunday, ahead of a game against the Pittsburgh Steelers, one Philadelphia Eagles offensive lineman took the opportunity to spoof an outfit his teammate wore a few weeks ago.

Offensive tackle Lane Johnson showed up to the Halloween weekend game in jeans, flip flops, a satchel, a wig and a green T-shirt from the Sea Isle, NJ, bar Ocean Drive. The look was an exact replica of the pregame outfit center Jason Kelce wore ahead of the Eagles' game against the Cowboys on Oct. 16.

Kelce stood out in his casual outfit during a high fashion week that saw many of his teammates wearing designer suits. Kelce's outfit was roasted online, including jabs from his own brother, Kansas City Chiefs tight end Travis Kelce. The brothers often go back and forth on social media about each others' fashion choices.

Luckily, Kelce took the joke like a champ, even making a photo of Johnson his profile picture on Twitter.

The gag also marks the return to the field for Johnson, after entering concussion protocol on Oct. 16 when he was injured during the game against the Cowboys. Johnson, who has opened up about his mental health challenges, took to social media on Thursday to triumphantly announce that he'd be playing in today's game following a recovery period that fell within the bye week.

Let's hope it's all treats and no tricks for the Eagles during this Halloween weekend game, and stay tuned to find out whether Kelce claps back at Johnson for the prank.